The first lawsuit challenging the Arizona immigration law was filed in court today by a fifteen-year veteran of the Tuscon police force. Escobar v. Brewer throws a battery of challenges against Senate Bill 1070. Some have a likely chance of success, some less so. But for those looking for a primer on how to approach the argument, here is a summary of the first Arizona attack:

Count One: Due Process

The Fourteenth Amendment guarantees due process when an individual is deprived of their property or liberty. Due process, refers to a lot of different procedural guarantees like understanding the specifics of a charge before being asked to mount a defense or having a charge based on a reasonable suspicion of guilt before being detained by law enforcement officials. Due process is, fundamentally, a guarantee that any deprivation of property or liberty will be fair. 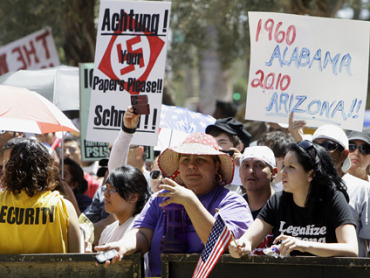 SB1070 authorizes police detention based on the suspicion of illegal presence on U.S. soil and the failure to provide evidence countering that claim. Suspicion of illegal status can be based on skin color as long as that is not the sole factor. In practical terms, this means that an individual can be deprived of their liberty for having brown skin and shabby shoes and then not having, in their possession, proof of citizenship. This is not fair for a number of reasons. First, skin color is not a reasonable basis for suspicion of guilt in any situation. Second, requiring individuals to produce evidence of innocence to avoid detention shifts the burden of proof from the government to the individual. In Arizona, you have to prove you are innocent before you are ever reasonably accused of being guilty of a crime. This is certainly not fair. It is also a violation of due process. Certain exceptions to this burden requirement have been carved out, but only for the Federal government in a limited number of circumstances. Extending this to a State within it's criminal law power is unprecedented and unwarranted.

The Fourteenth Amendment also guarantees equal protection of the laws. This means that the laws of a state must be applied equally to all citizens irrespective of race and gender (other categories are included, but not as highly protected). In the case of race, unequal treatment must be justified by a compelling government interest and the law that discriminates must be narrowly tailored to that interest. It also must be the least restrictive means of achieving the desired result. Racial discrimination gets strict scrutiny and that means that the court is going to be particularly hard on the government.

Though many critics think Arizona's new law is a shoo-in for equal protection violations, one cannot underestimate the compelling government objective exemption. If the government links illegal immigrants to rising crime rates in Arizona, even a non-causal relationship between the two, the government may be granted the right to discriminate.

Furthermore, the law, on its face, does not discriminate on the basis of race. Executive Order 2010-09 specifically directs that race, color and/or national origin cannot be the sole factor that gives police reasonable suspicion that a person is in Arizona illegally. As well, the law contains language directing the Attorney General to refrain from investigating complaints based solely on race when filed by an employer. For more on racial profiling see count five, below. This means that the government may be able to argue that the law, as applied, does not necessarily discriminate on the basis of any protected class. Discrimination, in that case, would have to be handled on a case-by-case basis.

Freedom of speech guarantees require that all laws curtailing speech will be applied neutrally to all viewpoints and irrespective of content. This freedom also guarantees that time, place and manner restrictions on speech will be narrowly tailored to serve a legitimate governmental interest. All speech restrictions must leave open alternative channels for communication.

SB1070 doesn't, on its face, concern speech at all. But the broad reasonable suspicion category that forms the basis for police detention under the law could infringe freedom of speech. An individual cannot say anything that might indicate that she is an illegal immigrant. This includes speech that indicates race or national origin. In the case of the Arizona law, individuals won't even have prior notice of what kind of speech is prohibited since that speech could include anything suspicious to a police officer. For day laborers, people who will be singled out for having accents, using routes across the border and looking "Mexican," simply saying anything at all could be grounds for a brief detention and questioning. The brief doesn't indicate what the argument will be under this count, but the chill on political and protected speech that could result from the application of this law may well be unconstitutional. Still it's a hard argument to win.

The pleadings don't specify what part of the Fifth Amendment is being violated by the Arizona law, but it is my best guess that they are referring to the right to remain silent. Generally, when arrested, an individual has the right to refuse to answer questions. This is referred to as part of the Miranda rights and must be explained to an individual upon arrest. Anything said after the Miranda warning is admissible as evidence. Certain violations do not include a right to remain silent (in certain states). These include traffic violations where a police officer is permitted to ask for license and registration and refusal to answer is grounds for arrest.

In the case of SB1070, an individual is required to answer questions (i.e. show I.D.) at any time for almost any action. They do not need to be engaged in a crime to be questioned and arrested for refusing to answer the questions asked. This seems like a clear violation of the Fifth Amendment.

This one is a no-brainer. The Supreme Court has found that seizure of one's person, i.e. a brief detention, must be reasonable (United States v. Mendenhall). SB1070 authorizes detention on the basis of race or other characteristics that bear no reasonable relationship to criminality. Thus, we have a clear violation of the Constitution.

The only problem with this analysis is that racial profiling for short detentions (presumably the ones that will be used in the application of this law) is permissible as long as the officer can, after the fact, come up with a non-race based pretext for the stop (Whren v. United States). Pretexts for stopping an individual for being a suspected illegal immigrant are boundless. You name any characteristic a human being possesses and I can think of how it could indicate illegal status. For example, you write the word favorite with a "u"? You are clearly a Canadian illegal immigrant and have handed the police a legitimate pretext for detention.

The Escobar brief states that, "The City of Tucson has no authorization or agreement with the United States to perform any immigration inquiries of any persons present in the United States." This basically explains the whole game. Immigration enforcement is clearly within the powers allotted to the federal government. States simply aren't allowed to regulate immigration. Criminal law, on the other hand, belongs clearly to the states.

If Arizona can prove that the enforcement of SB1070 is so clearly linked to protecting the safety of its citizens that it falls within the state law and order power, they might just beat this argument. SB1070 also clearly explains that Arizona has passed this law in order to help the enforcement of the federal government's immigration laws. If this enforcement of the laws is in conflict with federal laws in any way, the supremacy clause would render those conflicting parts invalid.

The argument that criminal law covers the new immigration law would require proof that illegal immigrants, by virtue of being illegal immigrants, are detrimental to public safety. It can't just be a correlation between illegal status, poverty and crime, for example. There must be a proven direct relationship between illegal status and crime. This will, I truly hope, be an unsuccessful argument. Logic just doesn't seem to be on Arizona's side for this one.

What the above analysis indicates is that the fight against Arizona's immigration law won't be as easy as many suspect or hope. This is not because SB1070 is lawful or just. It is because constitutional protections in the United States are woefully inadequate when it comes to institutional racism. Our courts allow for racial profiling, they permit "compelling government interests" to justify racism and they cut out exceptions to fundamental rights like the right to remain silent (driving related law disproportionally applies to Black Americans, just check the myriad studies concerning "driving while Black.")

We need to work hard to defeat SB1070 in the court of public opinion as well as the court of law. But we also need to take this opportunity to re-examine the way we protect racial minorities in this country across the board.