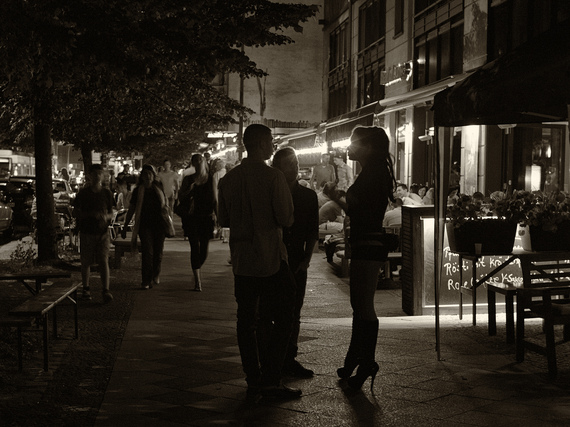 A sex worker negotiates prices with a client in a tourist strip of Berlin. Berlin is one of three German cities without prostitution-free zones. c. Sascha Kohlmann, 2012, Flickr

Germany (and the Netherlands) have been swept into the ire over Amnesty's new Sex Worker proposal: "After Germany legalized prostitution in 2002, police reported it became much more difficult to target abusive pimps" Time Magazine claims. "Both Germany and the Netherlands decriminalized sex work early in the last decade, but neither country saw a drop in human trafficking - in fact, the numbers increased. So did violence directed at prostitutes." says the Observer Reporter. In CNBC, "Countries [that] have decriminalized or deregulated the sex trade, like Germany and the Netherlands...have seen an explosive growth of legal brothels and increase in sex trafficking." And in the Irish Times, "Decriminalising sex in Germany in 2002 [Created] "mega-brothels" that were not being monitored. This made sex trafficking easier..."

Despite hundreds of mentions, the English-speaking media has yet to actually shine light on the German sex trade. So I decided to take a closer look at Germany's sex trade. Before getting into the realities of trafficking and labor conditions in Germany's sex trade, it makes sense to provide some context on how Germany legally handles sex work.

To start, was "prostitution legalized in 2002," and what is the change pointed to as the start of all bad things?

First, commercial sex wasn't "illegal" in Germany prior to 2002: regulations were largely limited to zoning, impact of contract and public benefits law, and third parties. Brothels fell within a legal grey area but were generally tolerated. (room rental for prostitution was allowed, but any "frills" - from condom provision to towels to advertising, were prohibited). Prostitution was, however, classified as "immoral," which justified the exclusion of sex workers from public benefits, health insurance, and labor rights laws.

The 2002 shift journalists reference is the “Law Regulating the Legal Situation of Prostitutes,” [ProstG] which removed morality language from most, but not all Federal German laws. The change was highly contested, and it finally passed as a watered down, three-paragraph federal law that leaves much discretion to German states.

ProstG removed morality language, criminal laws against promoting prostitution for those over 21 (previously called "pimping,") created unidirectional recognition of contracts between sex workers and clients (so sex workers can sue clients for non-payment, but clients can't sue sex workers for failing to provide services) and limited legal recognition for contracts between sex workers and employers (despite what is commonly claimed, business owners can't tell sex workers what acts to perform or with whom). Perhaps the most important part of the Act was ensuring sex worker access to employment benefits:

"Germany is a very strong welfare state, and if you pay taxes, you gain certain kinds of rights, unemployment benefits, social security... "Sonja Dolinsek, a Humboldt University lecturer, says. "Prior to the 2003 ruling, this wouldn't have applied to sex workers. They also could have been kicked out of health insurance before the law, so there was this discrimination in terms of legally having to pay taxes but not having the same rights as everyone who has to pay taxes." 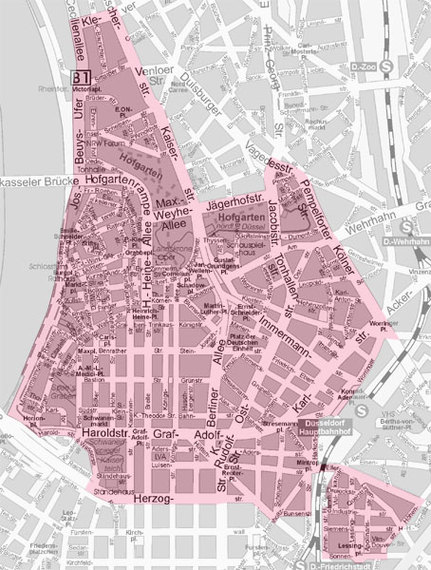 A map of Dusseldorf "Sperrgebiet," areas where all forms of sex work are forbidden. Source: https://www.duesseldorf.de/ordnungsamt/bilder/sperrbezirk.jpg

What the 2002 Act failed to do was create federal mandates on zoning, registration, health and safety, and police power. This left substantial jurisdiction to German states, and--in practice, meant that (especially conservative southern) states--never removed local laws grounded in the "immorality of prostitution" that the 2002 federal theoretically abolished.

While commercial sex was technically legal prior to 2002, many cities and states established "Sperrgebiet" or prostitution-free zones, effectively prohibiting prostitution (especially street prostitution) in large parts of the country. ProstG allowed German allowed states to keep (or even establish new) restricted areas. The system, Dolinsek says, is "a drop-down thing. There is a federal law that allows states to make...laws, and then a state says, 'we don't want any prostitution in places that have less than 30,000 or less than 50,000 inhabitants' and then bigger cities decide where in a city this can take place."

Prostitution in restricted areas is criminalized: "the first two times you get fined...between 100 & 200 Euros...the third time or if you can't pay, you have to go to jail..." And today, it's estimated that prostitution (or at least street-based prostitution) is only legal in ~230 of Germany's 2,064 cities and 11,253 community areas, and in those 230 cities, only legal in small Tolerance Zones. According to Sex Work AT an estimated 98% of Germany geographically, and over 90% of German towns and cities are restricted areas, and over two-thirds of German residents live in a city where commercial sex is prohibited. 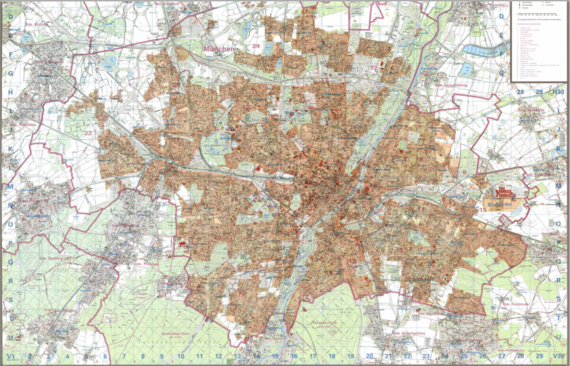 Fully "legal" prostitution, then, is an exception in Germany: Berlin is one of only three german cities without restricted areas. In other cities, street-based sex work is limited to a few blocks (Hamburg, Augsburg, Dortmund) if not completely forbidden (Düsseldorf). Indoor sex work is often banned from the innercity or most of the city...which, in places like Munich, Frankfurt and Dresden, means sex workers could also be fined or arrested from visiting clients or working from their own homes. In Munich, which only allows commercial sex in 3% of the city, sex workers say police regularly stage sting operations to lure sex workers into prohibited zones.

Also unchanged by ProstG, and augmenting Sperrbezirk, are state police laws, which--even in liberal cities like Berlin--give police the free reign to enter wherever they suspect commercial sex is taking place...including a sex worker's home. As for registration, that's voluntary...in theory. However, Dolinsek says, in conservative cities like Munich, "if a brothel employs sex workers who are not registered, the police will raid those brothels until they go out of business."

Moreover, even after ProstG, morality language is still entwined into some sections of the German federal code. "A lot of unrelated laws still include 19th century language such as “Gewerbsunzucht” (commercial debauchery)," Dolinsek says. "A migrant can be deported for contravening to sex work laws; If you work for the state, you can be fired, because prostitution is associated with criminality and corruption."

As in Germany, legalization often means criminalizing street solicitation and non-native sex work, fueling police abuse, and creating restrictions that criminalize sex workers from working collectively or from their own home.

And as Germany's regulatory system demonstrates, "this can lead to a two tier system where many sex workers operate outside these regulations and are still criminalized - often the most marginalized street based sex workers..." and in Germany, foreign sex workers...but I'll get into that in Part Two.

Of course, no country is completely free of regulation...nor is this something that Amnesty is advocating for. However, some countries do decriminalize sex workers themselves. New Zealand, for example, decriminalizes street solicitation and collectively owned brothels used by under 4 sex workers, requires licenses for operators but fees are minimal, and allows cities to establish zoning laws for brothels...but not prohibit them entirely.

Ultimately, Germany's regulatory system is liberal in theory but as distant in style from New Zealand's as the country is geographically--and it's oceans away from the system of decriminalization that Amnesty calls for. And as such, irrelevant in critiques of Amnesty's position.