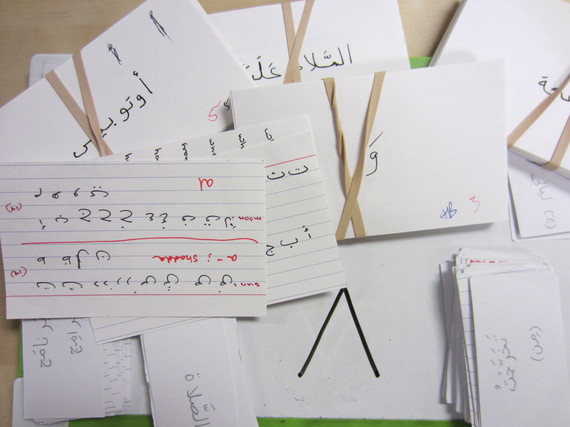 As a student of Arabic and a frequent airport traveler, I was extremely concerned when I learned that the Arabic flashcards I sometimes carry with me could be cause for detention or even arrest. This revelation hit home as I read the story of Nicholas George, a former college student who recently lost his bid to sue the federal agents who detained him because of his Arabic flashcards as he tried to board a flight from his Philadelphia home to Pomona College in 2009.

George stated that after the officers discovered the cards, they swabbed him and his cell phone for explosive residue and then called a supervisor, who subjected him to an aggressive interrogation. As related by Raw Story, it went a little something like this:

TSA Agent: Do you know what language he spoke?

TSA Agent: Do you see why these cards are suspicious?

As if that was not bad enough, during this questioning, a police officer entered the room, handcuffed George, and led him to the airport police station, where he was detained for an additional four hours. Eventually, the FBI arrived and began inquiring as to whether he was affiliated with "pro-Islamic" or "Communist" groups or had encountered anyone overtly against the U.S. government during his travels. George was eventually released after they determined he was not a threat.

In fact, according to George, his mentality was quite the opposite of what the agents assumed.

"I want to serve my country using my Arabic language," he said in an interview with CNN. "And it just seems crazy to me that for that I was arrested and treated like a criminal."

For the thousands of American students who wish to do the same, such as myself, this story is certainly discouraging, if not downright frightening. The correlation the TSA supervisor implied between bin Laden's actions and the Arabic language is not only illogical, but dangerous. If the TSA is only paying attention to Arabic, are they overlooking would-be terrorists speaking or writing other languages? Are German and Japanese speaking terrorists less likely to get caught simply because they don't speak the same language as bin Laden?

The judge who ruled over the case stated that TSA agents were justified in detaining George because in addition to words such as "yesterday," "fat," and "cheap," the deck of flashcards also contained words like "bomb," "terrorist," and "explosion." While it is understandable the words could be suspicious on their own, George had told the officers he was studying the words for an Arabic study abroad program, and judging from the recent unrest in the Middle East, they could prove useful there. Besides, what was he supposed to do if something happened while he was there? Sign the word "bomb" to natives? I'm sure that would be super helpful in a life and death situation.

Even if he wasn't going abroad, aren't those words included in every dictionary, regardless of the language, that passes through airport security? Should we arrest everyone carrying one, then, because they could be a terrorist threat? Or should we only arrest those with Arabic dictionaries because, after all, Osama bin Laden spoke Arabic, too? What about other "Arabic-looking" languages such as Urdu and Farsi? Do those count as well? (I've recently been learning Urdu, so I guess that makes me a double threat.) The ridiculousness of this logic ceases to amaze me.

I realize that TSA's job is to keep everyone safe while flying and I stand behind that 100 percent. However, censoring languages is not the answer. When innocent situations like carrying Arabic flashcards end up taking away resources from more viable threats, such as homemade bombs made with materials found inside airport terminals, one has to wonder how safe we really are. It is better to focus on what people are doing and carrying, rather than what language they are speaking, learning, or what they look like, if we want to keep our skies truly safe.