“Are these for you?,” asks the woman at the checkout counter of a New York City toy store as I buy eight packs of “The LEGO Movie” characters. Now, my first instinct is to lie. I come close to telling her that they are for my son –- I’m old enough to have one of those, even though I don’t. For whatever reason, I have a hard time lying to any sort of authority figure, even a toy store cashier. So, instead, I just decide to ignore the question ... which only results in an uncomfortably long pause while absolutely nothing progresses with my attempted transaction.

“Yes,” I finally answer. “We have a display,” I add, thinking that if I use the word “we,” effectively adding another person to this scenario, it won’t be as embarrassing. This tactic didn’t work. (There really is a “we,” but my skittish use of the word at this moment cemented this woman’s opinion that I live alone and that I will forever live alone.)

“Okay, enjoy,” she says as I sulk out onto 3rd Avenue, looking for the nearest bar.

What’s odd is that I wasn’t really that into LEGO when I was a child. Sure, I had a few sets -– like most people, I had the generic spaceman set that Charlie Day skewers in "The LEGO Movie" -– but why would I want LEGO when I had G.I. Joe, Transformers and Master of the Universe to play with already? LEGO didn’t really fit into my young individual canon.

When you visit New York City, there are a million things to do. When you live in New York City (for me, 10 years now), there are still a million things to do, but you stop doing them. Your social life outside of your tiny apartment basically boils down to one of three categories: eating, drinking, and exercising. (There are groups that you can join that can cover all three of these in one outing.)

After a while, even just hanging out in bars gets old. (There is a law in New York City that dictates that if you write for a living, you must spend all of your free time at your local Irish pub. I have never broken this law.) Around six months ago, almost as a lark, my girlfriend and I purchased a small “Star Wars” LEGO set at our local Duane Reade -- mostly because my girlfriend thought the Yoda looked cute. So, along with our milk, cereal and toothpaste, we bought a LEGO set that I kind of assumed we would never build.

The next night, we were at our local pub and, as yet another lark, we brought that LEGO set with us. And while we sipped pints of beer, we built that “Star Wars” LEGO set –- and it was a wonderful experience. It was almost as if there was something to show at the end of the night for my time wasted at a bar.

With the smaller sets, for the most part, people left us alone. It really wasn’t that much dorkier than playing old board games in public, which happens all the time around here for whatever reason. (Full disclosure: I’ve participated in that, too.)

Things took a drastic change when we decided to build an entire U.S.S. Enterprise at a bar. (Which isn’t even LEGO, but instead the Hasbro version, Kre-O. Perhaps this is when I should have realized I had a problem –- when I started building off-brand versions to get my fix.) Now, this particular bar we were at that night is what I would consider a personal haunt, but, on this night, a large group of well-dressed non-regulars flooded in –- all of a sudden, I’m the weirdo building a U.S.S. Enterprise surrounded by people in evening wear.

“Hey, buddy, mind if I move your spaceship toy so my wife can get closer to the bar?” a handsome man asked me.

“Um, it’s the Enterprise,” I started to respond, before thinking better of it and saying, “Okay,” then asking for my check and attempting to disappear into the night. It’s weird –- LEGO seems so normal, until it isn’t.

Yes, this has become a problem. And, yet, incidents like this don’t seem to stop me. A month ago, I didn’t know there was something called The LEGO Store. As I write this, I’ve visited that store four times in the last two weeks.

For Christmas, my girlfriend bought me the “Back to the Future” LEGO DeLorean, which we decided to build at a local Mexican restaurant while drinking margaritas. Halfway through, an older gentleman yelled at us from across the bar, “What is that?” After explaining, it was apparent this old salt had no idea what “Back to the Future” was, so any chance he’d leave us alone because we were building something retro “cool” was gone. And, yes, in-between stories about his ex-wife, he had an occasional pithy comment for us. As we left, he said, “Goodbye, LEGO people.” Ten minutes later, walking down First Avenue, I finally thought of my George Cosatanza “jerk store”-type comeback, but my girlfriend, wisely, wouldn’t let me go back.

We would return to that restaurant a week later to build a LEGO Sarlaac Pit.

I emailed my friend, a fellow writer who regularly contributes to Grantland, Matt Patches, about all of this. He put more thought into his answer than I ever thought he would, “There's creative ambition and then there's Howard Hughes behavior. I know you as a well-meaning LEGO builder, the kind of adult who takes joy in sipping a beer while piecing together a spaceship step by step. But maybe the ‘Everything Is Awesome’ mantra unlocked a darker side to that passion. Weeks after catching 'The LEGO Movie' ... at this point, I don't know if you build LEGOs or live them.”

He’s right about “The LEGO Movie.” Its mainstream success and its stranglehold on the box-office has told me Hey, this is okay. In the past month, I have purchased and built a Tie-Fighter, a Millennium Falcon and, the biggest financial investment, a "Red Five" X-Wing, which is about half the length of our coffee table. I am eying the LEGO Death Star. I honestly have nowhere to put it, but my bartender, of all people, is trying to talk me into buying it. He's an enabler in a way that I didn't think was possible. 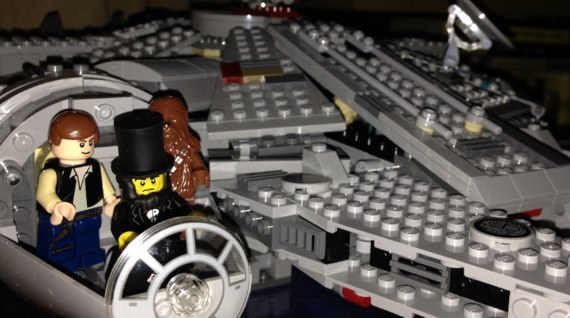 I should add: Writing this piece just makes me want to go buy more LEGO. I’m basically a bar-hopping version of the Will Ferrell character from “The LEGO Movie,” only without any offspring to teach me a valuable lesson.

On Sunday, I finished the 1500+ piece X-Wing Fighter, building the last parts of it at a bar near our apartment on First Avenue. As the final touches were added, a dart-playing-bro-type guy approached the table. “Hey, man, is that an X-Wing?," he asked.

“Yes,” I answered, waiting for him to dump what’s left of our pitcher of beer over my head, then give me a wedgie.

“That’s awesome,” he replied. Then he walked away to throw a dart.