Close your eyes. Picture the word "librarian." What do you see? Is it the shushing civil servant? Marian the Librarian from "The Music Man"? Rupert Giles from "Buffy the Vampire Slayer"? Or does your mind wander to something more prurient: the naughty/sexy librarian?

Generally, the image revolves around stereotypical descriptors such as: frumpy, stoic, intelligent, awkward, and authoritarian--even as the media assures the public that us librarians are indeed hipsters.

In May, Lego released its "Lego Librarian" as part of its popular minifigures series. I watched with some trepidation. More trite stereotypes? But then I thought: wait, this means librarians have officially hit the big time--we've been immortalized in Lego form!

It's worth noting that this isn't the first time librarians have been depicted as toys. Nancy Pearl from Seattle Public Library is the model for the Librarian Action Figure, which was released in 2003, sparking some debate about the image of librarians.

So does the Lego Librarian does hit all of the stereotypes? Yes: female, glasses, sensible hair, cardigan, muted colors. Her appearance is oddly reminiscent of "The Big Bang Theory"'s Amy Farrah Fowler, played by Mayim Bialik. As expected, the Lego Librarian comes with a book - "Oranges and Peaches" - an inside joke that references Parker Posey's movie "Party Girl" (1995) in which she portrays a library clerk.

Through its use of stereotypes, the Lego Librarian is immediately identifiable to the public. I get that. That's exactly what it needs to be. But here's the thing. Not all librarians are alike. Sure, a slice of us have our hair in a bun, and wear glasses and cat applique sweaters, but we're just as diverse as any other profession.

So I decided to take Lego's default librarian look and see if I could twist it around a bit. The librarian profession is full of quirky personalities all ripe for satire: busy working moms, stuffy academics, jaded old-timers, slacker males, pink-haired non-conformists, and first amendment watchdogs. To see how I mix and matched various Lego pieces to poke a little bit of fun at my profession, check out my blog post. 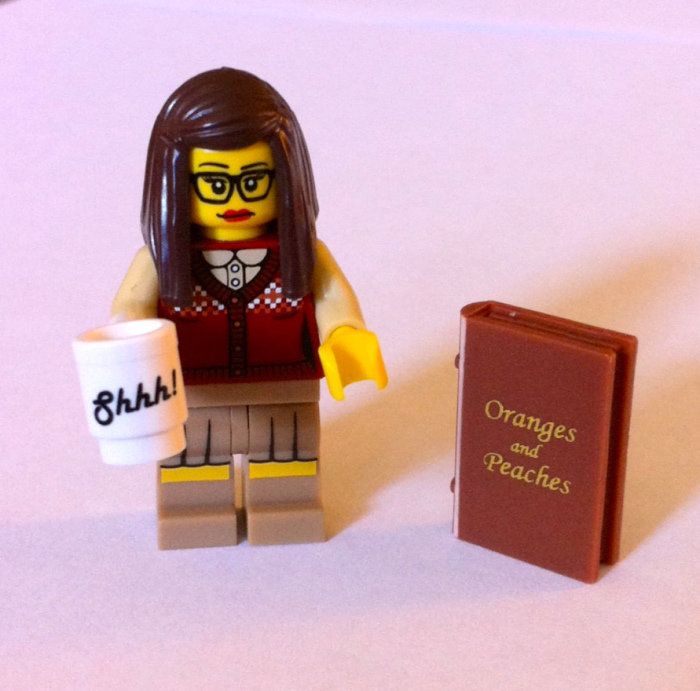