The singer sat down with Janessa Slater for an episode of "Sound Advice" for the comedy network Above Average. In the series, Slater plays herself as a media coach who gives advice to musicians. Meester released her first studio album, "Heartstrings," in October.

"People have pulled on my heartstrings, and I know what that's like, and it's just hard for me to believe that people have ever pulled on yours," Slater said. "You know? Because I tend to think that women that are naturally beautiful don't really experience life."

"Yeah, I mean, I haven't really been dumped, I guess, but I've been hurt," Meester, who married Adam Brody last year, responded.

"So you've never been dumped?"

"Not really," she added, "but the more heartbreaking thing is I just stick it out for a really long time."

Meester is yet another genetically blessed "Gossip Girl" actress who doesn't have to deal with things like rejection or exercise. In 2013, Blake Lively told Vogue that she indulges in chocolate more than she goes to the gym, although she made sure to add that does have "an active lifestyle."

"I'm always on the go. I don't need to have a [trainer] or pay attention to what I eat," she said. "I can't start my day without a cup of hot milk chocolate or finish without crunching a few dark chocolate squares. It's good for my morale." 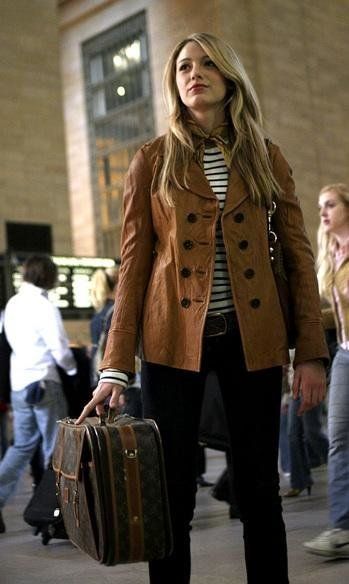 1 / 76
Serena (Season 1, Episode 1)
The first and most iconic outfit: Serena getting off the train at Grand Central Station looking like the well-traveled, well-heeled teen she is. The Louis Vuitton luggage, the Breton striped tee and the jaunty scarf scream, "I've been to Europe and back more times than you can count."