Corks were popping onstage, backstage, and in the lobby last night as the Metropolitan Opera opened its new season with a sparkling new production of L'Elisir d'Amore, Donizetti's tuneful romantic comedy of how an unrequited love can become requited with a good bottle of Bordeaux wine.

New York's social elite, elegantly gowned and bejeweled, turned out for the grand occasion and heard the soprano Anna Netrebko and the tenor Matthew Polenzani bring fresh life to one of the more enduring fixtures of the opera buffa repertory. They were joined by crowds who packed Lincoln Center Plaza and Times Square to watch the first night performance on a giant television screen.

The new production by Bartlett Sher, the fourth for the Met by the Tony Award-winning stage director, will also be the showcase premier for this season's Live in HD series which begins on Oct. 13 in some 1,900 movie houses across the country, in Canada, and overseas. It is a good choice for anyone new to opera as well as established opera fans. It is also a good date opera.

The story is a simple one. A handsome young peasant (Nemorino) is desperately in love with the beautiful owner of the farm on which he works (Adina). Shy and hesitant, Nemorino is initially rebuffed, and when a dashing army sergeant (Belcore) enters the picture to woo Adina he feels all is lost.

But when a traveling snake-oil salesman (Dulcamara) offers to sell the hapless Nemorino a magical potion, the elixir of love of the title, that will make Adina love him instead, hope revives. Nemorino gives Dulcamara his last ducat for the love potion, which in fact is nothing more than a bottle of wine. However, it has unexpected results.

Donizetti was one of the more prolific composers of the mid-19th century, turning out some 60 operas before his death in 1848 at the age of 51. While only a handful are still produced today, they are among the mainstays of the bel canto era, both comic and dramatic, including among the latter Lucia di Lammermoor, Anna Bolena, and Maria Stuarda, which will also have a new production at the Met later this season.

L'Elisir d'Amore has been a crowd-pleaser since its premier in Milan 180 years ago. It first arrived at the Met in 1904 as a vehicle for the legendary Caruso, and it has never been long out of the repertory. Pavarotti virtually adopted the role of Nemorino, singing it 49 times at the Met, and the beautiful and poignant second-act aria "Una furtiva lagrima" became a standard in his concert appearances.

Polenzani, an Illinois-born tenor who has been a stalwart at the Met, put his personal stamp on the role in the new production, getting most of the evening's laughs and delivering a well-sung performance from the opening "Quanto e bella" to a touching and moving rendering of "Una furtiva lagrima," the furtive tear he noticed on Adina's cheek that told him she loved him.

Netrebko, the Russian soprano who has become one of the favorites of Met audiences since her debut as Natasha in Prokofiev's War and Peace 10 years ago, was in excellent voice as Adina. Always a fine actress, her strong and mellifluous phrasing produced a stronger sense of the character of the once-fickle farm owner.

The bass Ambrogio Maestri as the quack Dulcamara and the baritone Mariusz Kwiecien as the roving seargeant Belcore rounded out the solid cast, and Maurizio Benini conducted a Met orchestra that was in fine form. Sher's production returns the setting to an early 19th-century Italian farm. Occasionally it seemed Sher wanted to find serious drama in what is never more, or less, than a charming romantic comedy, but the end result was a delightful staging of an enchanting opera.

CLICK through for pictures from the Met premiere of "L'Elisir d'Amore":

PHOTO GALLERY
Donizetti's "L'Elisir d'Amore" at The Met
Download
Calling all HuffPost superfans!
Sign up for membership to become a founding member and help shape HuffPost's next chapter
Join HuffPost
Voting Made Easy
Register to vote and apply for an absentee ballot today
Register now 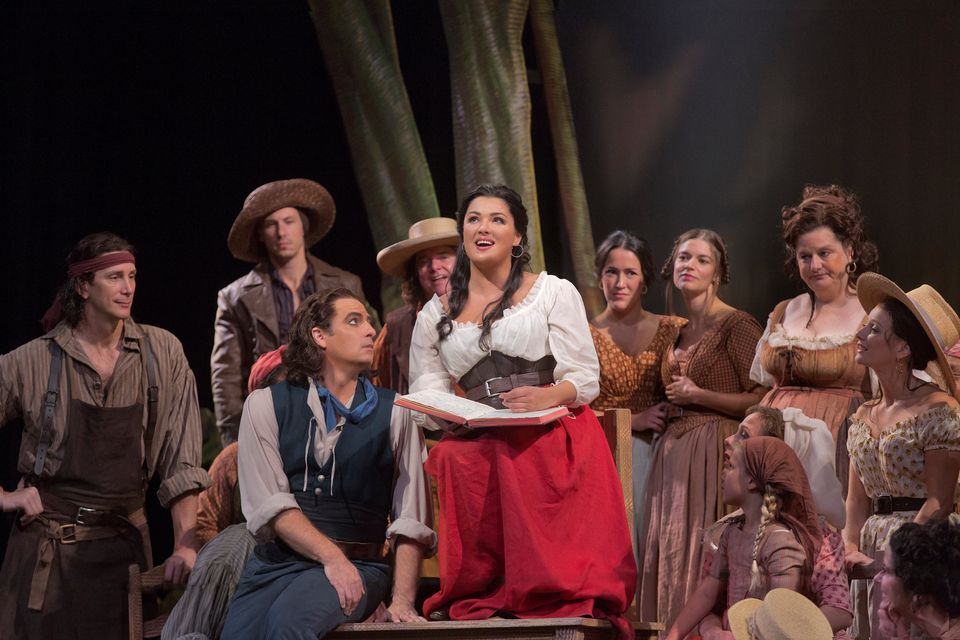