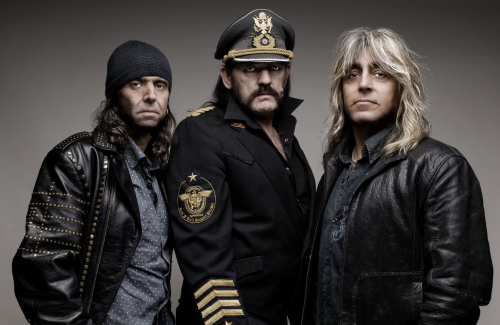 Last Saturday September 12th, the Motörhead tour came through Detroit at The Fillmore along with thrash metal pioneers Anthrax and a newer face of hard rock Crobot. It was loud. It was rock-n-roll! The crowd was a sea of metal t-shirts, denim, and black, with an audience of all ages causing all sorts of ruckus.

Motörhead recently released their 22nd studio album Bad Magic, charting high globally. Afterwards, I was able to chat with the legendary front man of Motörhead Lemmy Kilmister about the bands legacy and why he's still doing this as he's almost 70 years old.

How do you think a band like Motörhead stays relevant after 40 years?

I have no idea! (laughs). I have no clue. I'm just grateful for it.

40 years of Motörhead. What sticks out your mind about those early days when the band was just starting?

You were one time a roadie for Jimi Hendrix. How was that experience?

It was difficult to remember because we were all tripping all the time (laughs), so it's a bit fuzzy, but as you could tell obviously its Jimi Hendrix every night. What's better than that?!

I've heard many times you wanted to make music one of our legendary Detroit bands MC5. What was it about them that influenced you?

Did you ever meet any of the guys from MC5?

Yeah, I sang a couple of songs when they reformed as the MC3. I went and played two songs with them.

Lemmy, you've always had a way with the ladies, and I always feel like Motörhead had that groove in their music that was sort of sensual like a bad ass woman. How does that correlate into the music?

We were always bluesy in the beginning, especially when Eddie [Clarke] was in the band. He was blues freak and so was I. It is kind of a blues band, its just a very very fast one.

At the show here in Detroit, it was like the older guys in the audience causing the most ruckus. How does it feel to have such hit such a nerve with so many for so long?

If you look, we cross generations too. We get kids of 15 as well and people bring their kids to see us. Its all great fun you know. Rock-n-roll fun!

It was great to see people of all ages at the show and once those opening riffs of "Ace Of Spades" hit, it was just mayhem.

At that show, Mikkey Dee and Phil Campbell sounded great with you. How has it been being in the band with those guys for so long?

It's alright, you know. Phil's great and Mikkey's great. I was lucky we got the two right guys. It's a powerful band.

Really powerful. It was such a big sound!

Yeah, some people would say too loud (laughs). I don't think you can have too loud.

Hell no! It sounded great!

We try to do our best so we leave you less caring than you did when you came (laughs).

With Bad Magic, Motörhead charted high all across the globe, but the music business is this whole other thing than it used to be, do you even care about record sales and charting and stuff like that anymore?

It seems like a lot of the older metal bands that are still around are still charting pretty high in the USA and around the globe.

Even with the blues influence, Motörhead came from a counter culture to what was mainstream at the time, but you are now well into a maturation period of something that was once deemed a fad.

We've always been maturing. I don't know. I'm just glad that we can still pull a crowd. We don't sell out all of them. We just debuted on the charts at 17 I think. The last one debut at 22. We've been in the top 100 with those, so I'm please with that.

You're almost 70, most bands have already started to wind it down or have closed up shop completely, why do you still do it?

Because I like it and anyway, what am I going to do if I stopped? (laughs)

Right (laughs), I was wondering what would Lemmy be doing right now if he wasn't doing music. Sitting on a beach somewhere or what?

I'd totally be in jail (laughs).

Still being an outlaw at 70 years old?

Yeah, age is only relative to what you can do. You can get into all sorts of mischief. It doesn't matter.

Its always been a cliché that people what say that they going to be doing this until they die. I think you might actually do that!

I think I might as well. I don't see the point of retirement when there's nothing to retire from. Imagine if I retire. What am I going to do? Sit at home all day playing records and say 'Ahh, those were the days." No thanks, that's not me.

I wouldn't think any less would come from you Lemmy. Do you see any more Motörhead albums in the future?

Yeah, we'll make albums until the day we drop. I'll probably die in the studio doing a vocal track (laughs).

When its all said and done, what do you think the legacy of Motörhead will be?

Party music. Rock-n-roll. That's what I like. We do rock-n-roll. I say that at every show. We are Motörhead and we play rock-n-roll.