Over the past year, "Girls" powerhouse Lena Dunham has become a certified media darling, racking up celebrity acquaintances and Twitter followers by the boatload. But, if her words in a recent V Magazine profile are to be believed, Dunham hasn't always been so fortunate.

Dunham, who's become known for the quirky charm and witty persona she imbues both on- and offscreen, says her "worldview was formed from feeling isolated."

The writer-director-actress says she's grateful to be "freed from the prison" of beautiful Hollywood women whose careers revolve around their appearances. "I ate cake for breakfast on the day of the Emmys, I ate cake for dinner, my workout didn’t require Spanx, and I still feel like I looked better than people expected me to. It was amazing. I could feel the envy of every woman in the Sunset Tower.”

Dunham may have enjoyed basking in her radiance at the Emmys, but that isn't the only time she's been floored by her own image, which is often viewed as a respite from the stick figures that populate most of Hollywood. She's still amazed by all the free clothes she receives thanks to her celebrity status, saying she's glad no one is "being an asshole and sending them in a size 4." Dunham says she wears them "for several days straight" because her "grandma’s depression-era mentality makes me think it is the most beautiful thing I ever owned."

Here's an official photo from Dunham's spread in the latest issue of V Magazine, as photographed by Terry Richardson: 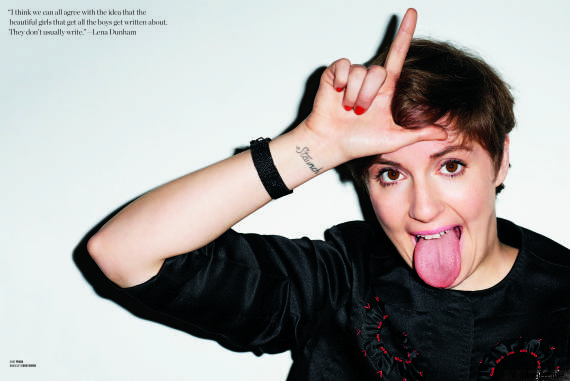