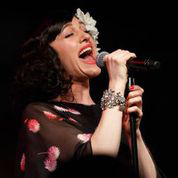 You think a Tony-winning star would perform Broadway show tunes for her engagement at the Café Carlyle. Not Lena Hall, who told me at the "Kinky Boots" opening night back in 2013, that her true music metier was rock in the manner of Robert Plant and Janis Joplin. Of course she was a rocker in her awarded role as Yitzhak in "Hedwig and the Angry Inch," so when she was invited to sing at the Carlyle, she was not sure they even knew what she'd do: had they made some kind of mistake? And, would a loud sound work in an intimate room?

Perhaps the show's title, "Sin and Salvation," hints at a desired edge. After all, rock women can take naughty to extremes. Adorned with a Billie-like gardenia in her hair, selecting a mix of the familiar and what she called "B-side" tunes, and backed by a superb band including John Deley on keyboard, Lee Nadel on bass, Brian Fishler on drums, and directed by Watt White on guitar and backup vocals, she delivers, the rock genre consciously calibrated for the Carlyle's elegance. For the Carlyle's exuberant crowd on the run's second night, this strategy worked fine.

Channeling a variety of vocalists, yes, Plant and Joplin, but add Erykah Badu, Elton John, Tori Amos, and Annie Lenox, Hall's range is impressive. Her set features Paul McCartney's "Maybe I'm Amazed," David Byrne's "Psycho Killer," James Brown's "It's a Man's Man's World," and Jack White's "Three Women." She'll be performing at the Carlyle till April 18. Watt White, her music director said that the Carlyle may mark the beginning of a tour; he will be joining Hall in San Francisco, bringing "Sin and Salvation" to Feinstein's at Hotel Nikko.