What do United States students holding painted prostheses, a flash mob in Germany, an 11K race in Colombia, a
concert in Afghanistan, and a photo exhibit in Turkey all have in common?

When the participants roll up a pant leg, they are all part of a global action, known as Lend Your Leg, to ban landmines and support victims.

Every year, more than 4,000 people are victims of landmines around the world, and 70 percent of them are civilians. This is not just a number or a statistic; these are people like you and me, with dreams, with families, with a life.

The Colombian NGO Fundación Arcángeles launched the Lend Your Leg concept in 2011, asking individuals to roll up a pant leg in solidarity with landmine victims and call attention to the issue of landmines and their devastating effect on communities throughout the world.

Beginning on March 1, 2013 (the 14th anniversary of the Mine Ban Treaty’s entry into force) and running through April 4, 2013 (the International Day for Mine Awareness), campaigners in 50 countries around the world, from Afghanistan to the United States, Ethiopia to South Korea, and Cambodia to Syria, are urging governments that remain outside the Mine Ban Treaty to join immediately and all governments to take steps toward achieving a mine-free world.

Since the Mine Ban Treaty became legally binding in 1999, much has been achieved to reduce the humanitarian toll of mines. Positive outcomes include:

But mines still threaten millions of people in around 70 countries, people who often already live in the planet’s poorest and most vulnerable communities. All over the world, these indiscriminate weapons prevent access to land and destroy the chance for people to build safer and more prosperous futures for themselves and their children.

More must be done to ensure all states clear all their land, destroy all their stockpiled mines and ensure mine victims have their rights respected and their needs met.

No country is immune to the dangers of landmines.

In fact, between 1999 and 2009, the Landmine Monitor recorded 212 U.S. casualties from mines/explosive remnants of war (ERWs)/improvised explosive devices (IEDs): 83 killed, 129 injured. If we take into account the mine accidents prior to official reporting dates, the total number of mine/ERW/IED survivors in the U.S. is likely to number in the thousands.

Additionally, from 2001 to March 2010, 967 American soldiers lost at least one limb in Iraq and Afghanistan.

In 1994, President Clinton became the first world leader to call for the “eventual elimination” of antipersonnel landmines. In 1998, Clinton set the objective for the U.S. to join the Mine Ban Treaty in 2006. However, the Bush administration reversed that decision in 2004 and decided that the U.S. would retain the right to use any antipersonnel mine equipped with self-destruction or self-deactivation mechanisms (also called “non-persistent” or “smart” mines) anywhere in the world, indefinitely.

In response to an outcry from the global community, the Obama administration initiated a review of U.S. landmine policy in late 2009. At the Mine Ban Treaty’s December 2012 Meeting of States Parties, the United States observer delegation stated that the U.S. will be announcing the outcome of its three-year review of its landmine policy “soon.”

Over the past three years, Obama and his administration have received letters of support for U.S. accession to the Mine Ban Treaty from 68 Senators, nearly 100 leaders of prominent U.S. nongovernmental organizations, key NATO allies, U.S. military personnel, 16 Nobel Peace Prize recipients, innumerable landmine survivors and countless citizens from around the world.

By joining the treaty, the U.S. would send a clear signal that all types of antipersonnel mines are unacceptable weapons. Joining would also encourage other remaining outlier states to accede and strengthen international security.

You can show your support for landmine survivors and pressure the Obama Administration to announce their landmine policy decision by:

Together we can show global solidarity for the survivors of landmine accidents and call on all countries to: 1.) Join the Mine Ban Treaty if they have not yet done so; and 2.) Implement the Mine Ban Treaty by destroying landmine stockpiles, clearing mine-contaminated land, and assisting victims.

Join us. Lend Your Leg to Ban Landmines.

‘Lend Your Leg' to Pressure the U.S. to Ban Landmines
Ecuador Mine Removal 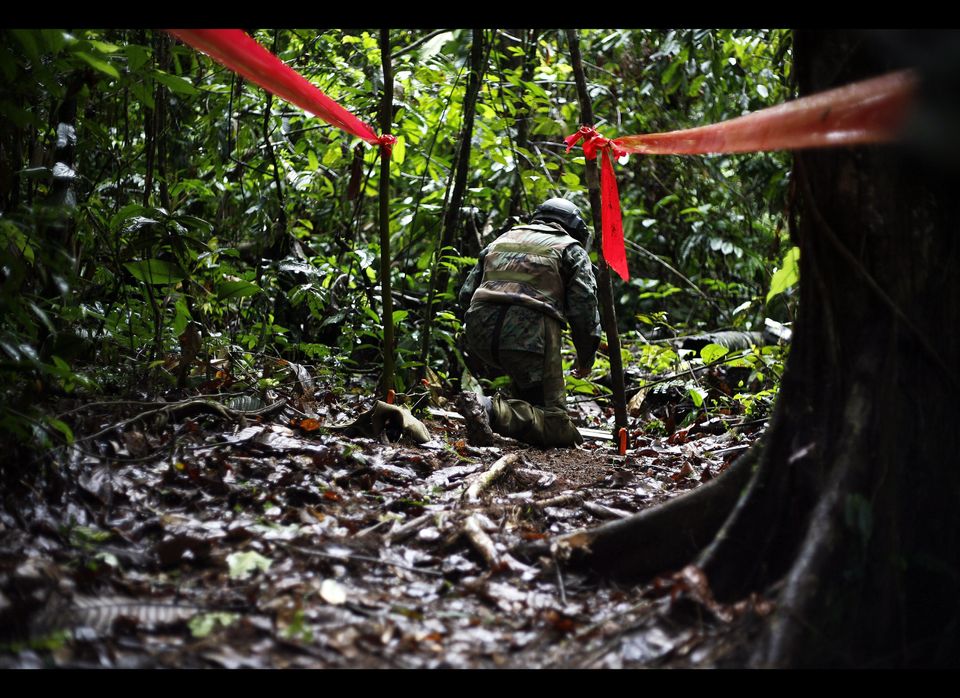 1 / 14
Ecuador Mine Removal
Soldiers look for mines in Morona Santiago, Ecuador Nov. 17, 2011. Even though the safety protocol is meticulous, most of the work in this zone is manual. The soldiers trace every centimeter of the jungle with their hands. Approximately 100 soldiers that belong to the Ecuadorian Army are charged with the deactivation of 16,000 mines that were placed during the successive conflicts between Peru and Ecuador. They must clear all the area before 2023, according with the agreement between Ecuador and the Organization of American States (OEA). The soldiers work at five Ecuadorian provinces: El Oro, Loja, Morona Santiago, Pastaza and Zamora Chinchipe and at the moment have removed 4,887 mines, 74 antitank, and 9 explosive appliances or grenades without detonating. The soldiers have several technologies at their disposal in order to detect the mines such as dogs trained, a robots, excavation with machinery and the manual removal. (Edu Leon, LatinContent / Getty Images)
Edu Leon, LatinContent / Getty Images