Last week, as Ukrainian President Viktor Yanukovych tried to hang on to power, opposition protesters tore down statues of Bolshevik leader Vladimir Lenin across the country, according to the BBC. The symbolic gesture signaled the protesters' desire to tear away from Ukraine's Soviet history and the country's ongoing dependence on modern Russia.

In one video, far-right activists with the group Pravy Sector are shown pulling down a Soviet statue in the town of Zhytomyr, according to protest organizers Euromaidan.

Euromaidan also tweeted a photo of a statue tumbling in Odessa.

As parliament ousted Yanukovych on Saturday and he fled the capital of Kiev, Lenin statues continued to fall across the country, Radio Free Europe reported. One Ukrainian newspaper, Ekspres, counted as many as 90 Lenin statues torn down by Monday.

And as Mike Opelka of The Blaze points out, even a music video emerged, featuring a montage of "Falling Lenins" in different cities set to patriotic music.

Not all Ukrainians were cheering, however. In the Russian-speaking east, many Ukrainians are protective of Soviet tradition and skeptical of the Ukrainian revolutionaries' anti-Russian stance, the BBC reports.

In the eastern city of Kharkiv, some residents rallied to protect their Lenin statue on Sunday, as shown in this RT video.

Though the wave of falling Lenin statues crested in the last week, the tide began long before Ukraine's climactic weekend.

On Dec. 8, 2013, Ukrainians tore down Kiev's Lenin monument during a mass rally in reaction to President Yanukovych's rejection of a pact with the European Union. Ukrainian protesters accused Yanukovych of kowtowing to Moscow, Forbes reports. 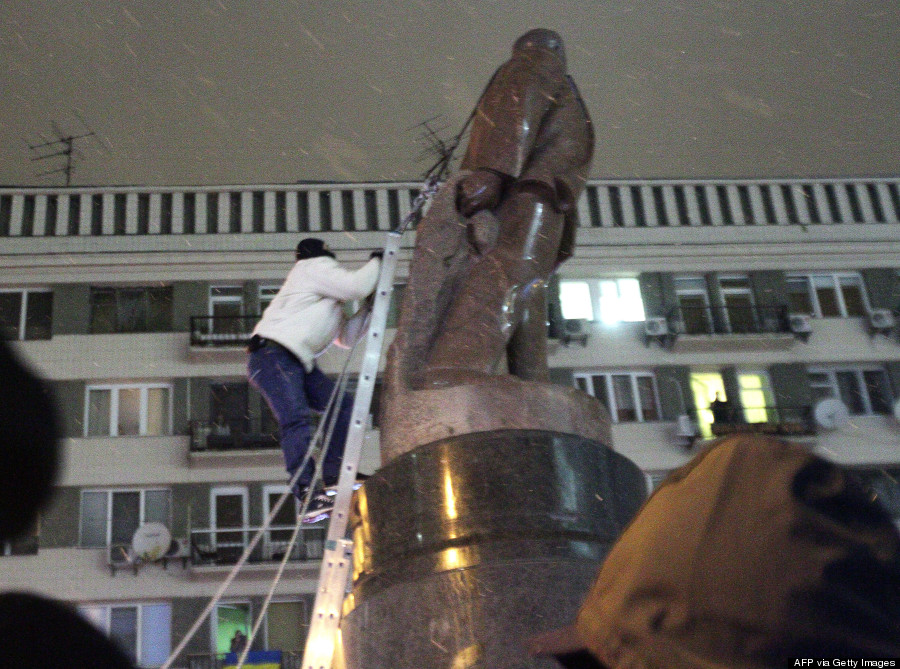 A protester climbs a ladder to attach a cable and prepare to pull down a statue of Lenin in Kiev on Dec. 8, 2013. (ANATOLI BOIKO/AFP/Getty Images)

Protesters thereafter erected a golden toilet in place of the Lenin statue, a symbol of regime excess based on rumors that Yanukovych had such toilet on his country estate, Euronews reports. 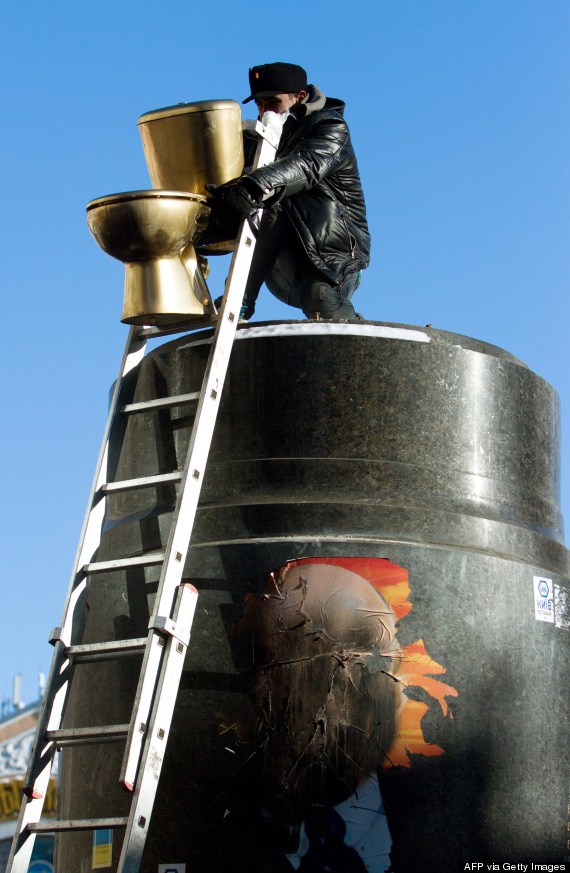 An activist of an Ukrainian students organization installs a golden toilet on a pedestal where a statue of Lenin used to stand in Kiev on Feb. 3, 2014. (ANATOLII BOIKO/AFP/Getty Images)

Even before recent protests erupted, statues of Lenin were a battleground between Ukraine's political left and right. Between 2009 and 2012, 12 Lenin statues were smashed with sledgehammers, broken, shot with paintball guns and dressed in a rabbit mask, according to Ria Novosti.

As the BBC explains, the relics of Soviet-controlled Ukraine are tainted by Ukraine's divergent interpretations of its history. To some, the statues are historical treasures. To others, a nostalgic reminders of an idealized Soviet-time. But for Euromaidan protesters and their brethren, the icons represent the continued grip Ukraine's former master still holds on the nation -- something they're more than happy to see come crashing down.