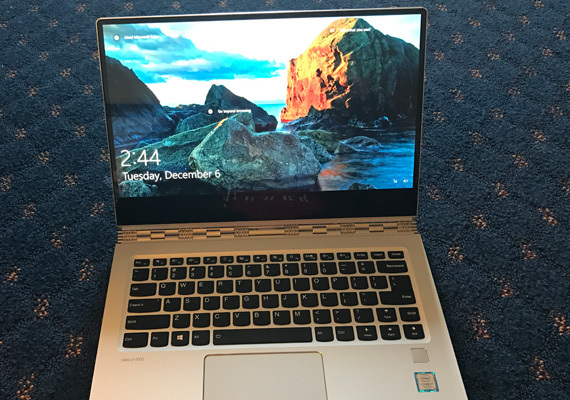 The industrial metal design with the glass cover may make the Yoga 910 weigh more than it should (3.09 pounds), but it is still light, very portable, and it feels so good touching your hands that you'll forgive the extra weight. Because it's a hybrid, you can fold the screen all the way back. In order to be able to do this without accidentally touching the screen, Lenovo had to add a large space below the screen. Perhaps the space is a little too big. 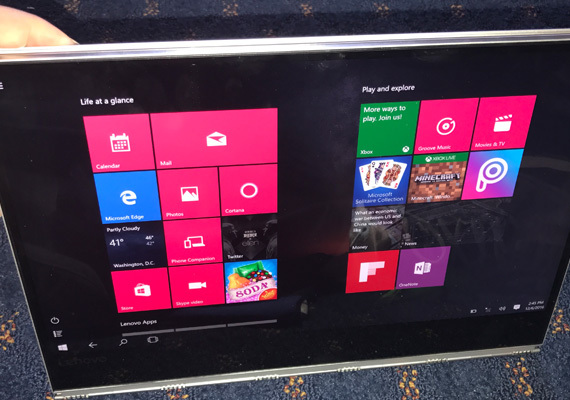 The Lenovo Yoga 10 has an eye-popping screen. [Photo by Daryl Deino]

The 4K screen is one of the best available on a laptop. Many say that you do not need a 4K screen on a 13 or 14-inch laptop because your eyes can't tell much of a difference between Quad HD and 4K. That may be true on a smartphone, but you can definitely tell the difference on Lenovo's 13.9-inch screen, which also has an excellent contrast ratio that outdoes the Dell XPS 13 or even the Surface Pro 4.

The keyboard for the Yoga 910 may be a reason this laptop hybrid will be returned by some, but it doesn't have to be.

The right "Shift" key is a small key all the way to the right. You will certainly miss it and accidentally press the "Up" key instead, which sits where the "Shift" key should be. That's where a program like SharpKeys comes in and lets you remap the keys. Overall, the typing experience on the 910 is average once you do the remapping.

The Yoga 910 runs the latest 7th generation Intel Core i7 processor at 2.7GHz (2.9GHz Turbo Boost). The version for this review has a 512 SSD and 16GB of RAM. Despite all those monster specs, it only has an Intel Graphics HD 620 graphics chip, which isn't a problem in most cases.

The 910 was able to handle 4K video editing in Cyberlink's Power Director very well, even though Google Chrome and Microsoft Word were running in the background. The only problem, at least when I first started using the device, is the most discussed flaw of the Yoga 910 - fan noise.

When I first launched Photoshop, I heard this loud whistling noise that was very strong. At first, I didn't even think a laptop was capable of producing that noise. It never lasted long, but was annoying. After checking different online forums, I realized that this was a huge issue with Lenovo's latest hybrid device. However, going into the Power Management settings and setting the maximum processor speed to 99 percent makes the problem a lot more tolerable. I tweeted Lenovo about the situation, and they said a solution to the problem was being worked on.

If you are looking for a system that can be guaranteed to run from early morning to late evening without having to lug a power adapter along, the 4K i7 version of the Yoga 910 is not your device. That said, once you understand how much power a 4K screen with a powerful processor eats up, you'll certainly appreciate the 910's battery life.

With the brightness set at 70 to 80 percent at different times, I was able to stream back to back videos from Netflix for six hours. The battery life on the Yoga 910 outlasts that of the high-end version of Microsoft's Surface Pro 4 and the 2015 version of the Surface Book. You will definitely want to carry the USB-C charger with you, but chances are you may not even need it.

The Yoga 910 may not be the best PC laptop available, but it is definitely the best PC laptop available for its price. Getting the most out of the Yoga 910 means changing the settings in power management to quiet the extremely loud fan and remapping the "Page Up" key to "Shift." You shouldn't have to do this once you pay over $1000 for a laptop. However, Lenovo's Yoga 910 proves worth these minor sacrifices.