You know what parks need? More geometry. We may not have come up with this unlikely combo on our own, but after seeing Leo Villareal's geometric sculpture in New York's Madison Square Park we are saying out with the swings, in with the spheres! 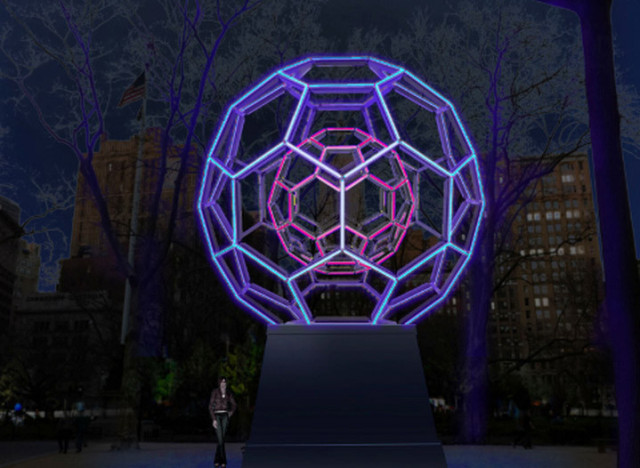 Villareal, the LED maestro behind the light sculptured facade at the Brooklyn Academy of Music, harnesses universal phenomena through tangible objects. The slow choreography of the galaxy or the inscrutable mathematics of molecules gain a digestible and almost empathetic narrative through the artist's touch. This newest installation is no different, bringing a 30-foot illuminated sculpture to Madison Square Park.

The sculpture, dubbed "BUCKYBALL," is an ode to inventor Buckminster Fuller's geodesic dome, an incredibly strong sphere-shaped structure made of triangles. (One example is the Spaceship Earth at Walt Disney World.) Villareal's lights are arranged in a series of pentagons and hexagons that mirror "Fullerene" molecules, which are -- you guessed it -- named for its resemblance to Fuller's invented shape. Spherical fullerenes are also called "buckyballs."

The piece is made of 180 LED tubes, with individual pixels located every 1.2 inches, and is able to display a whopping 16 million colors. The gargantuan light-molecule will emit a glowing palette of colors onto the surrounding park, using chance-driven software to emit random compositions of color and speed.

The piece will trigger the human response to search for patterns and meaning in their surrounding environment. The iconic shape epitomizes when science's aesthetics and futility become intertwined. The happy meetings of art and science in this work make us so happy inside, even the time-travelling team of inventor Fuller and artist Villareal gets us excited.

"BUCKYBALL," presented by Mad. Sq. Art., will remain on view daily from October 25, 2012 through February 2013 in Madison Square Park.