WASHINGTON -- Leonard Matlovich. Does the name ring any bells?

It didn't for me. But it was his tombstone that I used to jog by a couple of times a week just to read his powerful parting message to the world.

"A Gay Vietnam Veteran," it reads in bold letters. And then, this: "When I was in the military they gave me a medal for killing two men and a discharge for loving one." 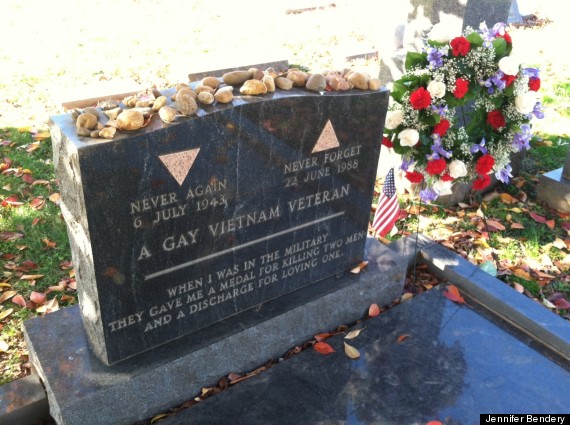 There's no name on the tombstone, which is tucked into a quiet section of the Congressional Cemetery in Washington, D.C., where a cluster of gay veterans are buried. It almost seemed better without a name, like it was a symbolic grave for all the gay soldiers who fought for their country but had to hide their true selves. I only noticed a name today, on Veterans Day, on a nearby plaque. Matlovich. So I looked him up.

It turns out Matlovich was a hero on a couple of fronts. To the military, he was an esteemed Air Force sergeant who earned a Purple Heart and a Bronze Star Medal. To the gay community, he was the first U.S. service member to purposely out himself to challenge the military's ban on LGBT people.

It was March 1975 when he walked up to his commanding officer and handed him a letter stating that he was gay. According to a TIME story on the incident, when his commander asked, "What does this mean?" Matlovich replied, "It means Brown versus the Board of Education," a reference to the landmark Supreme Court case that banned racial segregation in public schools.

Matlovich was promptly discharged. He fought unsuccessfully for years to end the military ban, which stayed in place until 2011. But he made a name for himself as a vocal gay rights advocate at a time when there weren't many. He tried to create a memorial for the late Harvey Milk at the Congressional Cemetery. He forced Northwest Airlines to reverse its ban on passengers with HIV, and was arrested outside the White House protesting what many viewed as President Ronald Reagan's insufficient response to the AIDS crisis.

Today, as I watched locals stroll in and out of the cemetery with their dogs running loose on the grounds, I asked some of them if they had seen Matlovich's grave. Most people didn't know him by name, but they all knew his tombstone. One mentioned there was even a wreath-laying ceremony at his grave earlier in the day.

"It's a big deal," said one woman being dragged along by a Labradoodle. "Vietnam vets come here all the time. It pays tribute to them all."

I used to think this tombstone was a gem that nobody really knew about -- a spot I could revisit from time to time to feel moved by this unknown person's final words to the living. It turns out lots of people know about it. Now you do, too.