On April 30th, the 37th anniversary of the end of the Vietnam War, the photo of gay Vietnam veteran Technical Sergeant Leonard Matlovich's powerful tombstone resurfaced online -- sparking discussion of its famous phrase:

"When I was in the military they gave me a medal for killing two men and a discharge for loving one."

A purple heart and bronze star recipient, Matlovich was discharged from the U.S. Air Force after confessing his sexuality to his commanding officer. While he successfully sued the Air Force for reinstatement in 1980, Matlovich agreed to drop the case in exchange for a $160,000 settlement. 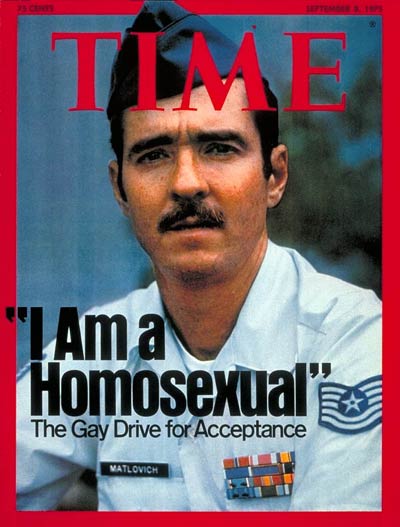 "The most eloquent and most convincing testimony against the policy of 'Don't Ask, Don't Tell' comes, as such testimony usually does, from those who have paid the highest price for the policy's failings," Senator John Kerry said, according to a website run in Matlovich's honor. "And the most compelling I have ever read is on a tombstone in Congressional Cemetery, not far from the Capitol."

Matlovich's struggle triggered a national movement and discussion of gay rights -- especially in the military. It was highlighted by his 1975 TIME Magazine cover.

Matlovich died on June 22, 1988 from complications of HIV/AIDS after years of speaking out for the cause.

In the section of the website dedicated to the story behind tombstone, it notes the inscription of his last name at the foot of the memorial is the only tie to Matlovich himself, as he wanted the stone to be a monument for all gay veterans.

View other LGBT related photos and videos that have gone viral on the Internet in the slideshow below:

Correction: An earlier version of this story incorrectly stated April 30, 2012 was the 35th anniversary of the end of the Vietnam War. It was the 37th anniversary.