On Monday night, I was invited to participate in the red carpet event celebrating Tuesday's release of the Star Trek DVD/Blu-ray.   Not only was it at the Griffith Observatory, somewhere I've always wanted to go, but the legendary Leonard Nimoy stopped to chat with me.  I couldn't help myself.  I had to ask about a little video he did years back called, “The Ballad of Bilbo Baggins”.  It's gotten over a million hits on YouTube.  I'm sure you've seen it.  If you haven't, check it out here. 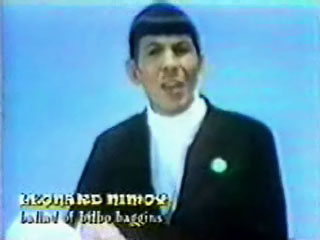 Nimoy couldn't have been sweeter about it.  He laughed when I told him I had just put the video up on my blog that day.  He said, “Ha!  Now that comes under the heading of 'be careful what you do because it lasts a long time'!  It's a great kids song.  It's a charming kids song.  I'm amazed to see...it's got over a million hits on the internet.  It's great!”  He also gave me a few thoughts on Star Trek's lasting appeal. 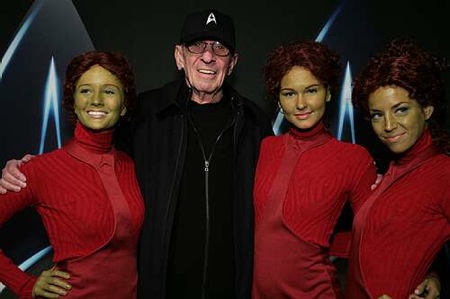 Why has Star Trek lasted so long?  Why does it still have such loyal fans?

Well, there's so many ways to look at it.  It's a great space adventure.  It's a great subject matter.  We did terrific social commentary stories.  We did some important work.  And watching this family of characters interact with each other and solve problems together is something the audience doesn't get tired of.

Well, since they've changed the game here and the time travel story in the new film allows them to take the characters anywhere they want, what would you like to see happen to Spock?

Well, the family is back together again and there's a whole new formation.  They can go wherever they want to go.  I have no idea what they're thinking about.  But the world is their oyster in more ways than one.

Did you give Zachary Quinto any advice about playing Spock?

I didn't advise him.  We had a lot of good conversations, about what Spock was about and what Star Trek was about, and where Spock fits in in the Star Trek universe, but I did not advise him.  Zachary didn't need my advice.  He's a very intelligent and very well-trained actor.  He's a great guy too. 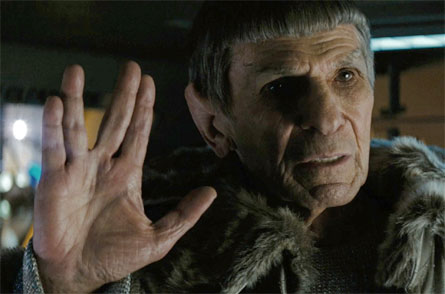 Here's hoping they'll find a way to get Nimoy into the next two sequels.  I'm hearing rumors about William Shatner doing a cameo in the next one.  If that happens, I promise to get him to do “Rocket Man” on camera.