Leonardo DiCaprio is trying to promote his new movie, “Once Upon A Time In Hollywood,” but he has a “Titanic” problem.

It seems people can’t stop asking him why Jack, his character in the 1997 movie, froze in the ocean instead of climbing onto a floating door that saved Rose, the role portrayed by Kate Winslet.

Robbie admitted she had been nagged by the same question since seeing “Titanic.”

“Oh my gosh, I thought it. I remember bawling my eyes out when I was a girl,” she said.

But DiCaprio refused to go there.

Robbie wouldn’t let it drop, calling it “the biggest controversy in modern cinema.”

Pitt noticed DiCaprio clearly wishing to talk about something else and decided the only plan of action was to double down.

“Could you, could you have squeezed in there? You could’ve, couldn’t you?” Pitt teased.

“Did you mention it at the time? Were you like, should we make the door smaller?” she asked, only to get shut down by DiCaprio.

“Titanic” director James Cameron joked in 2017 that Jack had to die “because it says on page 147 [of the script] that Jack dies. Very simple.” But no one has ever explained why two people couldn’t fit on the door.

“Once Upon A Time In Hollywood” premieres in theaters July 26.

You can watch the exchange between DiCaprio, Pitt and Robbie below: 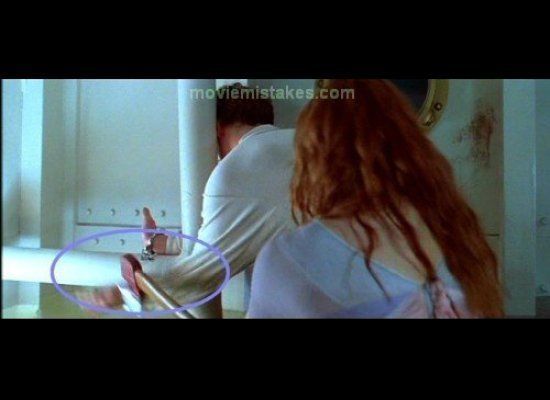 1 / 10
'Titanic' Movie Mistakes
When Rose (Kate Winslet) went to break Jack (Leonardo DiCaprio) out of handcuffs, she decided to use an axe. If she missed -- which, obviously, she didn't -- she would have ended up cutting his hand off. However, if you look at the scene frame-by-frame, you can see that Rose actually <em>did</em> hit Jack, right on the wrist. Lucky for Leo, that thing wasn't real.