Like a character out of some ancient fairy tale, Russian artist Leonid Tishkov can't seem to go anywhere without a human-sized crescent moon by his side. Be it Paris, Austria or Taiwan, the artist can usually be found with his lunar travel mate in tow, lounging on rooftops or dangling off the edge of a boat in scenes that take us back to our favorite childhood books.

Tishkov's most recent obsession -- a love affair with an illuminated, man-made moon -- tugs at the heartstrings of any romantic soul. He's documented the entire experience in a photography project called "Private Moon," inviting viewers to glimpse intimate moments of his strange adventures.

We asked Tishkov about his celestial pal in a recent email exchange, which was conducted in Russian. Anthropomorphizing his moon at any chance he got, he explained how the two met, the intellectual world of Russia, and his hopes for the future of Russian art. Scroll down for the full interview.

How did this project begin? In other words, how did you meet your moon?

One day I was invited to do an open-air installation in a picturesque place near Moscow. On the shore of the lake was a beautiful old pine, and I suddenly imagined a moon shining through it's silhouette. I remembered the work of the Belgian surrealist Rene Magritte which featured a thin moon frozen in the silhouette of a tree. This painting is called "Tree with Crescent Moon" or "Le 16 Septembre [1955]."

So I booked the studio and went to work creating my two meter-long moon with lamps inside. I hung it on the pine tree, stretched out a long cord to the nearest outlet and turned on the light. And then the miracle happened. Many viewers thought that this moon came down from heaven to Earth. In an amazing coincidence, the event was held on the evening of September 16. It will soon be 10 years since my moon jumped from the behind the pine branches in Moscow and began traveling around the world with me.

As an artist, do you often find any inspiration in Russian fairy tales?

Of course! I'm an artist -- a storyteller -- so folk tales inspire me. The ancient Ural peoples who lived in my home told a fairy tale about how a shaman goes into the next world, illuminating the path of the moon. So in all of my photos, I can be seen in my late father's cloak, because he travels with me in this way. There's also a story by the Russian writer Nikolai Gogol about how the devil stole the last moon from the sky. I am inspired by poetry as well, like the Chinese poet Li Bai.

How many places have you have visited with your moon?

At first, we were not traveling. I just saw my moon in a forest near Moscow, then on the balcony of my cabin and then on the roof of my workshop. But eventually my moon saw photos of people from around the world and she began to ask if we could travel. So we went! In Austria, I offered to give the moon to anyone who wanted to take her for himself. We traveled to Paris in December. It was very cold! There you could see glimpses of silvery moonlight in a frozen pond fountain of the Louvre and the Tuileries.

Then in the United States my moon was in the Bass Museum in the 2008 exhibition "Russian Dreams." In April, she returned to travel around in Washington. I hope to show her the blossoming plums and the old Cape Henry Lighthouse in Fort Story, Virginia, because lighthouses are the children of the stars and the moon.

Where is the most interesting place you and your moon have visited?

The strangest place was in the depths of the Yenisei River -- this cold, fast-flowing river in Siberia. I took hold of the moon's chain and pulled her onto a fishing boat like a huge, bright gold fish. And I swam with her to a deserted shore.

If you could take your moon to one place you've never been before, where would it be?

I would like to fly with her to the moon, and show her the American flag that astronauts have put there. It sounds very poetic -- the moon on the moon. Here she is, against the background of stars and stripes, while I am in a suit embracing her, hanging in the sky behind the blue Earth. And then, after returning we would go visit Barack and Michelle Obama. 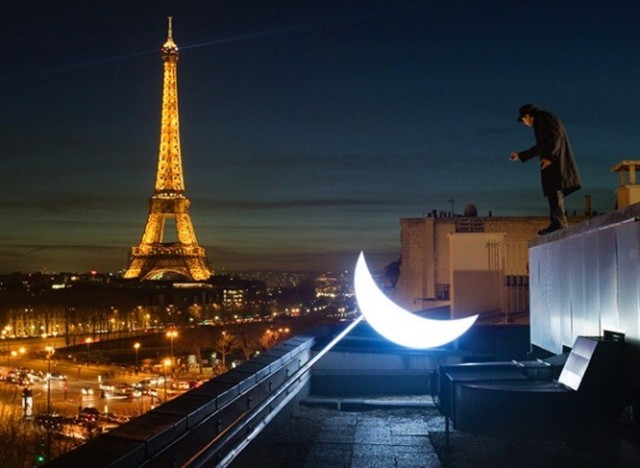 In a poem you wrote about meeting the moon, you say that you are both mythological creatures living in the real world. What does this mean?

All of us are partly mythological creatures. From birth, we build a world around us like a fairy tale, inhabited by our own characters. It's like my favorite book, Maurice Sendak's "Where the Wild Things Are." I am like the boy Max, but I was born on the other side of the world, in a small town in the Urals. I also came up with fairy tales, which I wanted to jump inside of. Fate had me become an artist, and then I was able to give in to my imagination!

As a contemporary artist, how would you describe the art world in Russia today?

I started as a cartoonist in the Soviet era, in the late 1970s. Then my art was censored and I was banned from publishing in journals because I participated in exhibitions abroad. After the revolution of 1990, I painted and created installations with an ironic context, addressing totalitarian myths and creating my own absurd worlds. And I felt free. In the 2000s, I began to work with the theme of memory, and began to tell simple and poetic stories. But being an artist became more difficult. Now, there are few collectors, foundations or grants supporting the arts. The government is trying to exert ideological pressure on the artists as well. But young people resist, with more allusions and hidden hints. Artists will always try to swim against the current.

Who are your favorite contemporary artists in Russia?

From the old generation, I appreciate the artist Erik Bulatov, especially his paintings with text. And from the new generation -- a very young street art artist from Yekaterinburg named Timothy Radya. He recently collected a tower of shields that the police use during crackdowns, and set them on top of a gilded throne. Suddenly, the wind blew, and the whole house of cards collapsed in one second! It reminded me of the old story of King Ubu, which was written a hundred years ago by the French writer Alfred Jarry. History repeats itself, but humanity does not learn her lesson!