Sitting in Paris in the rain is a strange place to be dreaming of leopards, but as elegant women bob up and down the Champs-Elysées in front of me in all forms of mock leopard print, I mull over why this particular pattern has endured as being beautiful while others fade away. We've all seen the array of animal prints that come in and out of fashion, but ultimately leopard print beats it all. Fashion designer Oleg Cassini, the man who designed a real leopard-skin coat for Jackie Kennedy, wrote later that his design started a fashion trend that ended up being responsible for over 250,000 leopards being killed in a decade -- killed just for their beauty, just for their skins, just for our vanity. At first I railed against even the fake representation of leopard patterns, because it is still adornment of a symbolically conquered animal, one that may erupt once again into some idiot still wanting the "real thing," which we all know is best adorning leopards, not humans. But now, as long as it is not real fur, I believe it simply celebrates the pattern's beauty. 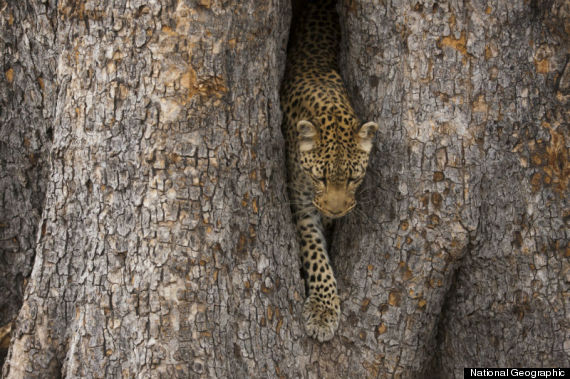 A week ago Beverly and I sat in a very different place, one where a different kind of Champs-Elysées paraded its beauty in front of us: elephants in their hundreds beating the lacework of paths in the Selinda Reserve in Botswana from the interior to the lake in the north. Each line of 30 or 40 elephants wound their way through shrubs and bushes and around trees such as the one we sat in front of. This large "sausage tree" has somehow managed to survive being crushed by a few thousand elephants a year, so it was the perfect fortress for what we soon saw as just a small movement inside a hole in its trunk. As our eyes refocused, we started making out the spots and rosettes of a cat, a leopard hidden in the most impossibly small hole for her size. The parade of giants around her hardly woke her, but when she did stir, we saw something we did not expect: A 1-day-old leopard cub, its eyes still tightly shut, wobbled its head up for an instant and opened its mouth in a silent cry for food and care and all the things the vulnerable and young of any species impose on us all. It is a weapon they are born with that turns us all into putty, their innate ability to be cute. 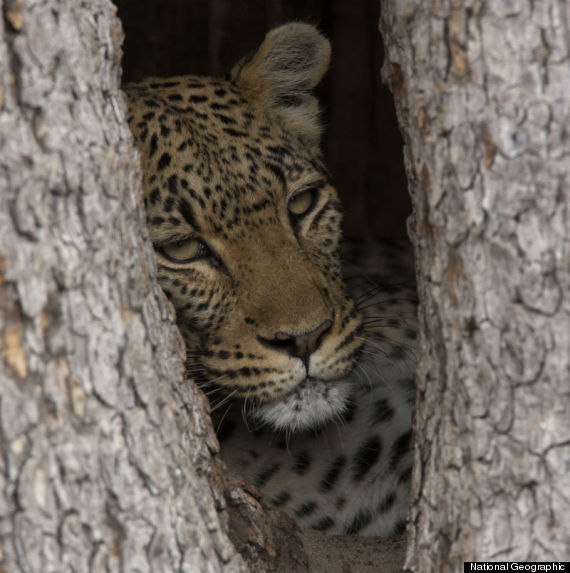 Beverly and I have made films on leopards before, "Eye of the Leopard" and "The Unlikely Leopard," both for National Geographic Channel and Nat Geo WILD, but we did not have leopards out of our system: We both leaned forward, spoke in hushed tones and settled down to see what would happen next. This was the youngest leopard cub we had ever seen. The opportunity to follow another young life into the world of big cats is alluring, and even after 30 years of working with big cats, the two of us were still seduced by the beauty of the fur's pattern, the life in those luminescent cats eyes and the stealth of the mother as she squeezed out of the tree, looked at us and moved off to hunt. It's impossible to consider anyone cold hearted and emotionally depleted enough to want to kill such a thing. But people do. CITES still issues about 1,000 permits a year to hunt and kill leopards in Africa. Every place in Africa that leopards are hunted sees a decline in the population and yet we continue to allow this to go on. 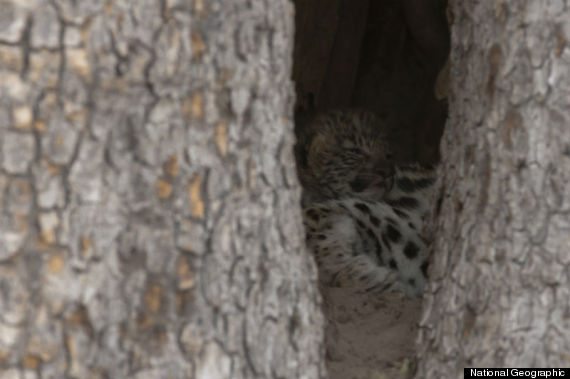 With our friends at National Geographic and our Big Cats Initiative, we are determined to make leopard print a cause for celebration, not a reminder of our collective failure.

Dereck and Beverly Joubert are award-winning filmmakers from Botswana who have been National Geographic Explorers-in-Residence since 2006. Their mission is the conservation and understanding of the large predators and key African wildlife species that determine the course of all conservation in Africa. They have been filming, researching, and exploring in Africa for more than 25 years. Their coverage of unique predator behavior has resulted in 22 films, 10 books, six scientific papers and many articles for National Geographic magazine. Their films have been featured in Nat Geo WILD's Big Cat Week (Nov 28 - Dec 3), an extension of the Big Cats Initiative, a long-term commitment by the National Geographic Society to stop poaching, save habitat and sound the call that big steps are needed to save big cats around the world.