CARACAS, Venezuela -- The moment the tragic situation in Venezuela becomes normal, they have won. I tell myself this every time I enter Ramo Verde military prison to visit my husband, the Venezuelan opposition leader and prisoner of conscience Leopoldo López. At the prison, the guards regularly humiliate me, either by refusing my entrance, making me wait hours for no reason or conducting strip searches.

I know I am not alone in this embarrassment; countless women have allowed this routine, an indignity that must be silently endured to see our loved ones. However, in January, the degradation reached a new level, and so now I raise my voice on behalf of all women who are humiliated each time they visit a relative in Venezuela's prisons. During this visit, the colonel in charge of Ramo Verde prison forced me to wait two hours before seeing Leopoldo, while other visitors were allowed to pass through. As I waited, he started to yell at me very loudly, discussing my marriage and insulting me in front of all the other soldiers. I asked him to lower his voice and he told me that if I continued talking back to him, I would be banned from visiting Leopoldo for months. Eventually, I was moved to a separate area in the prison, a small room with two soldiers in it, who ordered me to remove my shoes, pants, t-shirt, undergarments and even my underwear. They later did the same thing to my mother-in-law, Antonieta Mendoza de López. But in her case, she was also forced to open her legs, while the soldiers repeatedly yelled at her, "Open them more!" in front of my children -- her grandchildren -- six-year-old Manuela and three-year-old Leopoldo Santiago. 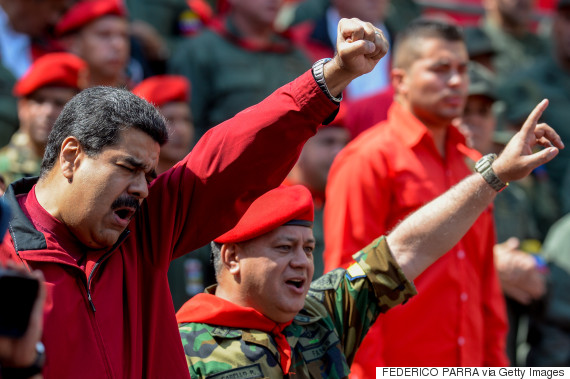 Venezuelan President Nicolás Maduro (L) and deputy and former president of the National Assembly, Diosdado Cabello, salute during a ceremony. (FEDERICO PARRA/AFP/Getty Images)
The
United Nations Committee Against Torture
and the
Inter-American Commission on Human Rights
set standards for acceptable conditions of detention and have judged that invasive visiting procedures violate the physical and psychological integrity of prisoners and their visiting relatives and qualify as cruel, inhuman and degrading treatment. Yet the Venezuelan government continues to employ these tactics as a way to demean and break us. To my fellow women who are victims of such abuse: we must not allow ourselves to become accustomed to it. We must never allow ourselves to become accustomed to the endless lines, insecurity, persecution and medical crises -- from the Zika virus to drug shortages -- that currently plague Venezuela. On Dec. 6, the people of Venezuela
voted
for change in legislative elections, and our National Assembly now has a supermajority from the political opposition aligned against Maduro. This starts by ending the need for people like me to visit their loved ones in prison. We must push to free the political prisoners, the persecuted and their families from these terrible situations. On Feb. 18, my husband Leopoldo will have spent two years unjustly imprisoned by this regime, our young children will have grown two years older without their father and I will have spent two years fighting for my husband's release. But our new National Assembly has the means to choose a different future for my family. On numerous occasions, the U.N. has
called for
Leopoldo's immediate release -- a call that has been
echoed
by the Organization of American States along with
many other
international organizations and world leaders. The National Assembly is
set to pass
a law providing amnesty for the country's political prisoners, but this will not happen unless there is intense regional and international pressure on Maduro. 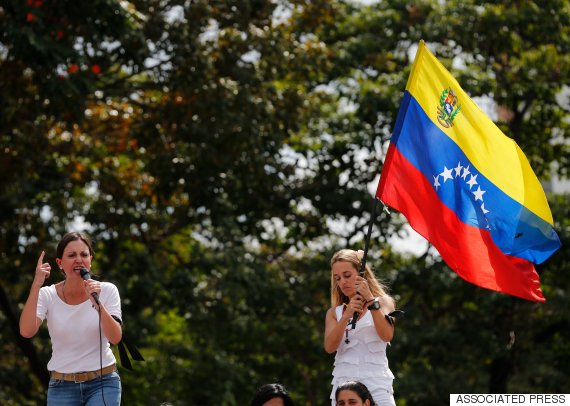 Opposition leader Maria Corina Machado (L) and Lilian Tintori, wife of jailed opposition leader Leopoldo Lopez, lead a protest in Caracas on Feb. 26, 2014. (AP Photo/Fernando Llano)
The soldiers who conducted those humiliating searches told us they were following orders from the leadership in the regime. If they are to be believed, which I am inclined to do, then we now know that the persecution and harassment will not stop until the leadership is held to account. The people of Venezuela are fighting the impunity of this regime, but it is not a fight we can win on our own.

We ask that all countries that value freedom, democracy and human dignity demonstrate to Maduro's regime that its attempts to silence domestic opposition will be met with unequivocal and relentless action, and that its lack of respect for the physical and psychological integrity of its citizens has been witnessed by the world and will not be tolerated. Despite the outrage that Venezuelans share over our country's crisis, today we are full of faith and remain committed to fighting injustice. My resolve has only been strengthened as the pressure on everyone who has dared to confront the regime has gotten worse. The people of Venezuela will prevail in restoring our freedoms, including the release of all political prisoners, through peaceful and democratic means.