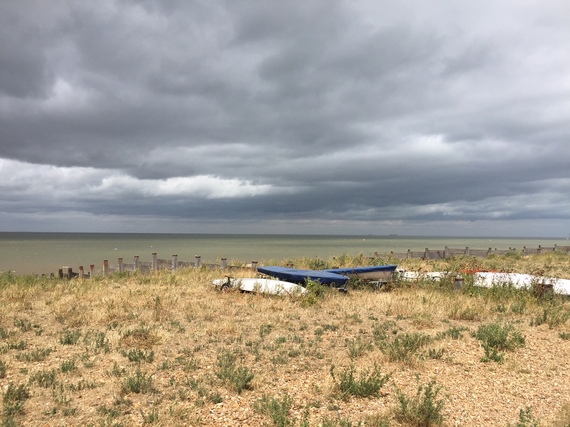 What is the relationship between global events and the decisions we make to travel?

People fleeing conflicts in the Mideast and Africa are thronging the French coastal city of Calais, desperate to make the crossing into the imagined paradise of England. Meanwhile, a strike by French ferry workers is critically slowing traffic both ways through the important Eurotunnel. These crises might have something to do with why Airbnb host Lesley Delacourt, whose hospitality I enjoyed recently in London, is experiencing slower-than-expected bookings this summer at her second home in France, about 46 miles from Calais. Since she rents rooms in both places, she travels frequently through the strife-ridden port.

"What I feel as I come through Calais is amazement at all the people from so many different countries and cultures, and the traumatic stories that have collided there in what is not even a slum, not even a campsite, as there are no facilities. It's the end of the line, a bottleneck, and an international scandal," she writes.

Delacourt, a 60ish Englishwoman with bright blue eyes and simple demeanor, reads news of the crisis in Calais with a concern both humanistic and personal. On the one hand, she worked as an international volunteer in the developing world for many years and understands that the refugees in Calais have legitimate fears for their lives. On the other hand, she has a house to let in the tranquil French town of Montreuil-sur-Mer, where the patterns of rural life carry on unchanged as they have for centuries. How to let prospective visitors know they'd have nothing to fear?

Despite her entrepreneurial interests, she can relate to historical forces that drive people to move around the world. Notice that this British host has a French surname? Delacourt's Huguenot ancestors came over from France around 1685, after Louis XIV revoked the Edict of Nantes and the resultant strife between Catholics and Protestants drove many Protestants to flee for their lives.

"My family had to pass through Montreuil to get to Calais and make the crossing to England, more than 300 years ago," she told me.

Montreuil-sur-Mer is known as the town where Victor Hugo's epic novel of class struggle, Les Miserables, is set; the novel's beleaguered hero, Jean Valjean, was its fictional mayor. It was the first place where Delacourt ever spent a night outside of England; her parents took her there for a vacation when she was a child. It took nine hours to make the journey then. Today, you could drive there from London in under four. It's a smaller world though no kinder than that of her forbears. Ask any of the 2,000 to 5,000 migrants who have made it to Calais from Syria or Afghanistan, Egypt or Eritrea.

"We come with one hope: just to feel safety. Not to feel cold," a Syrian refugee told a Guardian reporter in a video titled "Calais migrants: 'Get to England or Die Trying'."

Delacourt returned to Montreuil-sur-Mer later in life and found that her fond childhood memories did not deceive her. Though the town is not -- as the name implies -- on the sea, lovely beaches are only 30 minutes away. There are cultural activities, great food and wine, and regional charms in every season. In October, there is a Festival of Soup and Bread. At Christmastime, there is an ice rink. Two of the town's restaurants have Michelin stars. She eventually bought an 18th-century building and fashioned a cross-channel life, with one foot in England and one in France.

"In 10 years of residing in two countries I haven't yet found myself driving on the wrong side of the road," she told me in London with a wry grin. "There are things I like about both places. It's all part of the pleasure of traveling back and forth."

Perhaps as an effect of having lived in places such as Tibet, Delacourt cultivates minimalism and lives with as few material possessions as are practical. But she has two of everything that she or her guests would need -- one for each house -- so there is no need to cart things back and forth. She says she likes "sharing the resources I have with others who appreciate them."

But share them with the migrants? Not bloody likely.

"I feel guilty that I have all the freedoms of British passport, money, house, and car, as I have eye contact with the young guys hanging around the motorway exit to the tunnel," she writes me. "I think about housing people but ultimately couldn't face the hassle."

Some British activists are rising to the humanitarian challenge, and Delacourt is definitely on their side. But such responses are in the minority compared to the popular "raise the drawbridges" reaction in both France and England.

Nor has the English government exactly welcomed the "huddled masses yearning to breathe free." In 2014, less than half of those who sought asylum in the UK were accepted - a mere 10,050 souls. (France accepted 14,815.) As for political refugees fleeing the horrors in Syria? To date, the UK has given legal status to just 187 Syrian refugees. Turkey, in contrast, has taken around 1.6 million.

"I feel hugely sorry for these people," Delacourt writes. "I feel irritated that my journeys are disrupted and outraged at my government's 'more fences and dogs' response. I feel depressed at the thought that this is just the beginning, not the end, of the story, as desperate people will make these awful journeys and we have climate change refugees as well who will eventually need homes...

"I know there is no single solution...But the whole thing is very depressing."

So while the struggles in nearby Calais play out under the Klieg lights of major media, Lesley Delacourt will keep her lamps lit for visitors who want to experience the things that make the French happy to be French and foreigners like herself fall in love with France. Despite the shocking disparities, both flows of travelers are markers of human civilization. And England must define what it is to be English, while people seeking a safer life struggle to get there.