Ahh, the Republican Party of Virginia. You know, in the recent past, they've sort of given the world no indication that they're anything other than a dysfunctional, Twitter-abusing, confused and chagrined state party in precipitous decline. This hasn't changed at all. But we have to hand it to them: they're finding even newer ways to screw up, royally.

As Virginia political blog Not Larry Sabato details, someone who runs the RPV's official YouTube channel was apparently way into a YouTube video titled "The Kiss," a video that could potentially redefine the age-old "Virginia is for lovers" motto to include lesbian softcore erotica.

I think you'll agree, this video is probably NSFW, unless you work for the Republican Party of Virginia.

Sadly, however, this brief flirtation with edge came to an end after someone removed this content from the RPV's YouTube channel. It's just like the Amazon fail in reverse! That's too bad! Those ladies worked very hard on their phallic simulacra and really appeared to care about one another as they convincingly navigated the awkwardness of their feeling for one another to the swelling strains of some annoyingly repetitive piano vamping. Luckily, Not Larry Sabato preserved the memory with this screenshot. 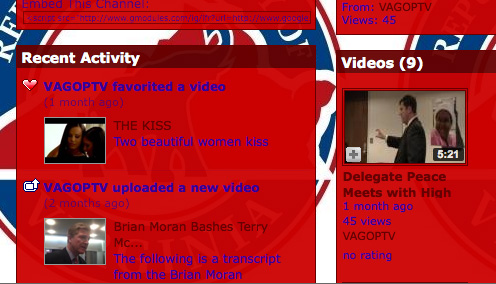