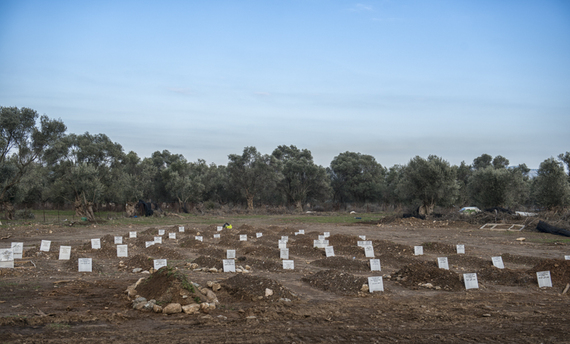 I came back from Lesbos yesterday with a heavier heart than usual. We keep hearing about the lives that get lost while trying to make the dangerous crossing from Turkey to Greece on rubber boats. Lives lost due to the harsh weather conditions at sea, the fake life jackets that are given to the refugees and the overloaded boats. Traffickers have no mercy. Bodies are recovered on what seems like a daily basis from the open sea by the coast guards or the fishermen; others are washed to shore, young and old alike.

I decided to visit the cemeteries where some of these people have been buried, because it is one thing to hear about the lives lost and it is another thing to see the graves with actual tomb stones engraved: Ahmad -- 9 months old; unknown baby -- 1 year old; Majed -- 5 years old; unknown girl -- 5 years old; Ajmal -- 23 years old; Ahmid -- 30 years old... The list goes on and on. These are the new Alan Kurdi. All had chosen to live and had the right to live, like we all do. They had chosen life over death but little did they know that life had not chosen them.

Where has our humanity gone? It is in times of trouble that we see the true face of those surrounding us revealed, and what I see could not be uglier. The whole world is standing by watching and doing nothing other than avoiding any kind of responsibility and pointing fingers to Greece for not doing a good enough job in stopping the flow. It is said that Greek authorities were told to push the boats back... a paraphrase to this would be to drown them. Whether this is true or not, the actions of the governments confirm just that, they don't need to say it in so many words.

The western world has a lot of soul searching to do. They should acknowledge their huge responsibility in this crisis, show more solidarity to Greece and step up. Every day that goes by is another day of mourning for humanity.