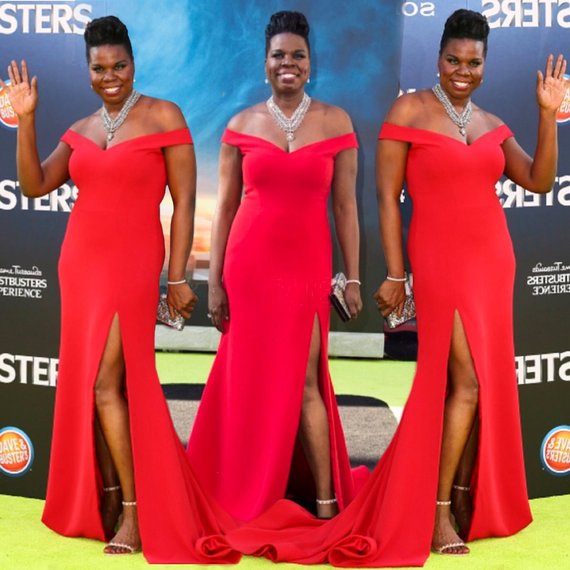 Leslie Jones at the premiere of "Ghostbusters," wearing Christian Siriano

Last week, a viral internet post about Leslie Jones made me cry. It was a clip from her guest appearance on The View, where she discussed her leading role in the reboot of Ghostbusters. Jones herself was misty eyed as she told Whoopi Goldberg what it was like to see her on screen when she was a little girl, saying:

"I just want to thank you from the bottom of my heart because now I know what I'm doing when I put on that Ghostbusters suit and little girls see me on TV now. They're gonna go, 'I can do it,' and you gave that to me."

It was hard not to share in her tears during this uplifting moment, which showed just how important and impactful on-screen diversity can be.

This week, yet another viral story about Leslie Jones made me cry. Only this time out of despair and not joy. After a successful opening weekend for Ghostbusters, a swarm of racist misogynists took to Twitter to spew vile hatred at the film's only black star. The comments and images that were sent to Leslie Jones publicly -- which are all too base and disgusting to be repeated or described -- left me wondering how anyone could possibly be so miserable as to feel the compulsion to attack another person this way. Even if Jones had given the worst screen performance in the history of cinema she would not have deserved such reprehensible treatment, nor would anyone under any circumstances.

But the loathsome attacks are especially perplexing and ironic given how truly wonderful Jones is to watch on the big screen. She has proven herself to be a real movie star.

Leslie Jones is always vibrant and laugh-out-loud funny in her stand-up routines, and in her work on Saturday Night Live. But she transcends her comedic persona in Ghostbusters, by tempering it, and revealing a soft charisma, nimble wit, and subtle intelligence, that we don't necessarily see when she's performing in sketches and bits. We also get to witness her radiant, if unconventional, beauty in the movie, which is a refreshing deviation from the dainty, ultra skinny, white women, with teeny-tiny features, that Hollywood has traditionally set as our standard for leading ladies. All of the same is true for her Ghostbusters and SNL, co-star, Kate McKinnon, who smooths over the spastic, comedic edge for which she has become famous, to allow a character to shine through, at whom we may laugh, but with whom we can relate -- even if she's somewhat strange. It is a complete pleasure to watch both actresses work with their more seasoned big screen co-stars, Melissa McCarthy and Kristen Wiig, and to experience the rare thrill of seeing complex, funny, women, as protagonists in a big-budget action movie, who are all showcased respectfully by the film's creators, and who seem to actually like each other.

We rarely see women at the helm of movies like Ghostbusters, so before I return to the unwarranted, heinous vitriol that was vomited at Leslie Jones, let's take a moment to consider how we got so lucky as to see her and the other women in these comic/action hero roles.

In a recent article in New York Magazine, the director of Ghostbusters, Paul Feig -- who also directed the hugely successful women driven comedies, Bridesmaids and The Heat -- discussed the drought of leading roles for funny women, and his drive to create more of them, crediting in large part his close friendship with his mother for this. Similarly, director JJ Abrams has described his own wish to see more women protagonists on screen -- such as the character of Rey in the Star Wars sequel that he directed -- saying that he wanted his daughter to see herself embodied by an action hero on screen.

And as I've said many, many, times, in many, many, different ways, casting matters. The more diversity of characters and actors we see on our stages and screens, the more opportunities we can create for identification and empathy between one another.

Furthermore, the greater varieties of skin colors, and body types, and forms of beauty, and intelligence, and charm, we are able to see on screen, the less people will be targeted for not fitting into the Hollywood mold.

We hate and fear change more than anything else. Just look to our current political crisis for clear examples of this. But we cannot give in to that fear and hate. Like Paul Feig and JJ Abrams, we have to make choices -- in our movies and our lives -- that make more of us visible to one another. This way we can share both laughter and tears, with more of our mothers, and daughters, and sisters, and friends.

One way we can do this right away, is to buy a ticket to Ghostbusters, and to use the hashtag, #LoveForLeslieJ, and buy the Leslie Jones action figure, and celebrate her brave, bold, radiant, and true talent. She is a movie star worthy of your love, your respect, your laughter, and your tears. Despite the undeserving obstacles in her way, she continues to cultivate and to share her great gifts. And that is her gift to all of us. 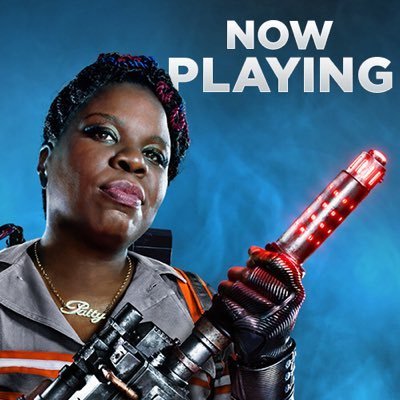 Into the White White Woods

The Oscar Speech I Wanted This Year: Mya Taylor from "Tangerine"

Calling All Hobbits of Color

My Gay Voice and Yours