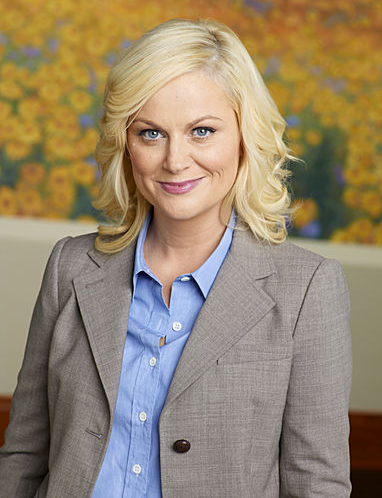 Leslie Knope, you fantastic feminist fictional icon, it is time to bid you adieu. After seven seasons of Parks and Recreation, the show is coming to an end. Leslie has fought passionately for everything from safe sex for seniors to gay penguin marriage. However her best moments are when she ever so smartly kicks patriarchy in the balls, showing us how absurd, ridiculous and outdated gender assumptions and stereotypes are.

If you're on the fence about feminism, Leslie Knope can change your mind. Perhaps you hate your vagina or the right to vote or equal pay for equal work. Because how annoying is all that shit?! Or if you're a man, maybe you find it totally annoying that feminists hate it when you call them "sugar tits." This is why you need Parks and Rec.

Throughout the years, Leslie Knope has boldly brought feminism to the small screen showing us that women can be career-focused, smart, bossy, feminists and at the same time love men, love life and really love waffles. She is a treasure trove of brilliant ideas and displays an unabashed nerdy enthusiasm for government. She shows us how awesome feminism is simply by being herself. As Parks and Recreation comes to an end, here is a look back at five times Leslie showed us how to us why she's a kick ass feminist.

In a culture where pop stars and actors are heralded as gods, it's refreshing to see Leslie proudly display photos of female politicians on her wall of "inspirational women". Hillary Clinton, Condoleeza Rice and Nancy Pelosi are some of the figures decorating the wall. By showcasing women known more for their brains than their boobs (though I have nothing against tatas) she shows us that women are smart, valuable and successful. Little girls can aspire to be politicians or astronauts, not just princesses or models or Justin Bieber's girlfriend.

In the "Beauty Pageant" episode, Leslie becomes a judge in the Miss Pawnee competition and attempts to subvert this hot mess of a pageant by judging the contestants not on beauty but on something she calls "the Naomi Wolf" factor. But alas, she is the lone wolf in this absurdity. Though she champions Susan, the piano-playing, history major who volunteers at a childrens' hospital, Trish, a pretty but vapid woman who has been on YouTube, loves hanging out with her friends and whose talent is holding a baton, wins the crown. Leslie may have failed at showing her fellow judges how ridiculous pageants are, but the viewers received her message loud and clear.

Leslie doesn't just have girlfriends. She has a seriously tight group of badass besties. She actively celebrates her friendships and cherishes her girlfriends for the beautiful little butterflies they are. Ladies, are you confused about how to prioritize your female friendships? Let Leslie set you straight. "Ovaries before brovaries", "Uteruses before duderuses" and a twist on an old classic, "Hoes before bros" are just some of her philosophical gems on the importance of lady love.

Her relationship with Ann is a genuinely sweet example of female friendship. They always have each other's back, supporting one another through breakups, job failures and life mistakes. When Leslie's crush Mark sets his sights on Ann, Leslie does not turn into a crazy banshee like one of the mob wives when someone looks at them sideways, (though she does get a wee bit jealous.) Instead, she graciously gives Ann her blessing to date him, truly living up to the phrase "ovaries before brovaries." But her greatest girlfriend achievement was creating Galentine's Day. A day before Valentine's Day, Leslie has commemorated February 13th as a day to hang out with your gal pals, eat waffles and get down with pussy power.

3. She surrounds herself with supportive men.

Leslie does not hate men. Or marriage. Or children. Probably because being a feminist doesn't mean you're an evil sea demon who eats male babies for breakfast. On the contrary, there are many awesome men in Leslie's life.

First off there's her first boyfriend, Dave. Unfortunately when they first meet, Dave actually mistakes a photo of Madeline Albright for Leslie's grandmother causing her to reconsider whether she wants to date someone less informed than herself. He soon realizes his ignorance is not going to curry favor with Leslie. So he makes a point of learning who all the women on her inspirational wall are just to impress her.

Then there's Ron Swanson, the resident alpha male and Tom Haverford the resident pervert, who are consistently supportive of Leslie and her endeavors even if they don't agree. Her gender is never an issue as they see Leslie for who she is -- an honest, upstanding person who always stands up for her friends and what she believes in. However her most ardent and steadfast male supporter is her husband, Ben. Whether Leslie is running for city council or simply trying to get fluoride into the city's water, Ben is always Leslie's biggest cheerleader. Even if it means taking the backseat and letting her shine. Like a megawatt bulb.

4. Leslie is not afraid to challenge gender roles and assumptions.

Leslie unabashedly aspires to be the president one day and even takes on the sanitation department in a challenge to see if women can be trash collectors too, (spoiler alert, Leslie won.)

In the Pie-mary episode, Leslie is forced to make a very important decision when her husband Ben decides to run for Congress. To compete or not compete in the pie-making contest among the wives of the candidates. Though at first she says turns down this exciting opportunity, (because she has like a job and stuff), she decides to participate after journalists accused her of being against hugs and hating her family. P.S. Have you ever hugged a woman who can't bake? It's like hugging Satan himself.

Not wanting to sabotage her Ben's campaign, Leslie agrees to bake a pie in order cement her standing as a proper wife, mother and all-around perfect submissive female. However Ben is unwilling to let his wife participate in this foolishness and rushes to her defense professing his love of her smarts and independence. Leslie follows up by questioning answering all the questions she knows she's going to be asked:

She tackles these double standards head-on, questioning the way we traditionally judge women. Leslie (and that sweet, sweet hubby Ben) show us how sexist assumptions make a mockery of not just women but men as well and ultimately act as a disservice to all of us.

5. Leslie is not a stereotype.

Watch your average female-lead show and you'll come away with the following lessons:

• We LOVE shoes.
• We are obsessed with relationships.
• We are neurotic and for all the wrong reasons.
• We care solely for sparkly things, rainbows and Beyonce.

Not in Leslie's world. Leslie is less interested in Beyonce and more interested in Barbara Boxer. Leslie may be somewhat kooky and intense, but only because she's passionate about what she believes in -- parks and people. Not that there's anything wrong with loving shoes or rainbows. But Leslie shows us there's a lot more to women than chocolate and baby fever. Because we are multidimensional and crazy and weird and shit like that.

Thanks to kooky, crazy, lovable character of Leslie Knope, we get to see that feminism isn't a dirty word and feminists aren't all angry ball-busting, hairy-legged, man-haters. Unless you're Pat Robertson, in which case we all are. Or maybe he's just bitter. In the words of Leslie, "I guess some people just object to awesome ladies."