When the raunchy "Bachelorette" debuted at Sundance this year, audiences were quick to note that, yes, the comparisons to "Bridesmaids" were inevitable, but that this new film was much darker. The woman responsible for this? Leslye Headland, a playwright who introduced the film's mean-girl characters on stage in 2008. In her play "Assistance," which premiered in Los Angeles and opens tonight in New York, she focuses on a different group forced together by circumstance: young assistants frantically responding to the calls of a demanding boss.

Though Headland did her own time as an assistant at the Weinstein Company, she says she was never interested in writing a roman à clef. In fact, she purposely never shows the boss or even reveals what the company does. "I was a lot more interested in the assistant's mentality and what happens to you," she says. "Is it you or is it the job? And does it matter which job it is? Is it sort of a mental construct you create for yourself?" Headland spoke with HuffPost Women about what it's really like to be an assistant and her surreal experience at Sundance.

Your play was really funny, but it also totally stressed me out.
It's not something that I set out to do necessarily, to be funny or to be dark or anything. I just try to be as honest to the characters as I possibly can, and that sometimes ends up being disturbing to some people and then funny to some people. When I saw "Devil Wears Prada," I was still an assistant and everyone was laughing in theater, and I was having a panic attack.

This play was part of your "deadly sins" cycle. When you were coming up with your topic for the greed play, what made you think of assistants?
It does sort of pervert the idea that we have of it, which is that greed is a sin that's reserved for people who already have money. For me, it's like, where does it start? Daniel [the boss] wasn't always Daniel. He must have assisted somebody or he must have learned that behavior from someone or he must have been put in some sort of situation that developed that idea, so where are those people and what's going to happen to them?

You were an assistant for six years. Did you pull specific incidents from your own experience when you were writing the play?
It's mostly the idea. I just sort of thought, What's the worst thing that could possibly happen here? If you actually wrote down a lot of the stuff that you experience in an office job, it's really mind-numbing.

It may be boring when you lay out each item, but your characters seem to think they're doing the most important job in the world.
And that's what I think is so interesting. When Jenny says to Nora, “It's just a job,” I didn't intend for that to be a joke. And I think people sometimes laugh at that line is because it obviously is something that has become much more than a job to her. From Jenny's perspective, it's just a job, and from Nora's perspective, it's absolutely life or death. It's combat. It's survival.

The relationships between the characters are interesting -- they're friends, but they're not really friends.
When I first started writing the play, I thought about Nick and Nora’s relationship and the relationship between a sniper and the guy who's in his ear explaining where to shoot. You rely on them, they're giving you instructions, they're helping you, but they're not your friend. We just happen to be in the same place, doing the same job, the same tasks and we form an alliance as a result of that, but that can change if the situation changes. I've seen "Band of Brothers" about a thousand times, and I just love the idea that Winters forms this incredibly close bond with his men and he gets to know them and yet he has to leave them. When I was talking to [actors] Michael Esper and Virginia Kull about their characters, I was like, "You know, it's weird when you sit across from somebody as long as these two characters have been sitting across from each other because if Nick is up late on YouTube watching funny shit, his first thought may be like, Nora would love this." Nora's not his friend, nor is she his girlfriend, but because that's who he sees every day and that's who he's interacting with, she becomes the first person that pops into his mind.

Do you think being a woman affects how Nora deals with the job? She and Nick are both really stressed out, but they handle it differently. On the other hand, Nora and Jenny, both women, also handle it differently.
I hesitate to say this because I feel like enough people have called me a misogynist already, but I think it does. There's a reason there's a line in the beginning where Vince says, "I hate girls, they're so stressful." What I meant by that joke, and what I also mean by showing Nora's collapse under the stress of the job, is that I guess sometimes women are just so much more emotionally in tune to what's going on. I certainly have felt that way directing movies -- there were a lot of times when I was just touched by how beautiful it was. I would think, Oh my god, this is gorgeous. And I couldn't cry on my set. I'd be like, Don't feel that, feel it later. And then I'd go into the bathroom and cry because I was so excited or so happy about what had just happened and then I'd come back out and be like, "OK, we're ready to go!" There's a certain decorum that you're supposed to have in the professional world, and I just think women, they feel things, they really do. They have a certain relationship with their emotions that is really important, and I think there are some jobs and some professions that don't want that or allow that. The other side of the coin is Jenny. There are plenty of women out there who would not have the same emotional reaction to it. You can either adapt the way Jenny does, or you can not adapt the way Nora does. She's just like, "Fuck this, it's not worth it if I always have to push my feelings into a little box." Whereas Jenny is like, "It's totally worth it to me."

At a certain point, you did leave your job as an assistant. What made you feel it was time?
Oh god, I think it was just getting older. Honestly, I was fast approaching 30 and getting to a place where I was like, "I could continue doing this and build a career here, or I could go out there and do something else that I feel very passionate about, although a little fearful to do it." I finally very boringly put in my two weeks' notice. I got a lot of support from my co-workers, who said, "Yeah, you should do that." You know, you're not a very good assistant. You're probably a much better writer.

Do you think there's a benefit to this kind of role?
Absolutely. A lot of the stuff that happened prepared me for what I'm doing now. If there's any advice I would give, it's that whatever your dream is, don't let that fade into the background as a result of having an assistant position. Take some risks and work as much as you can and either move on or if it's something that you feel like you can do, do that. The danger of a job as an assistant is that you sort of end up facilitating somebody else's dream instead of your own.

Finally, I have to ask you about "Bachelorette." It got a ton of buzz at Sundance.
Oh my gosh, it was like a dream. I must have saved like a school bus of kids in a different life. We had no idea that it was going to have the response that it did. It’s like that child you have a really strange sort of freaky relationship with. I don't understand "Bachelorette" -- I don't know why she keeps insisting going out there and showing everyone her private parts and her boobs. I'm almost like, "Can you put some clothes on?" But she seems to be this other being. I had never walked the red carpet before. I even told one of the actors, "It's so good that I read so much US Weekly and watch so much E!" because I sort of knew what to do. It was a huge group, a beautiful screen and a beautiful sound system. It's like seeing your kid dressed up in a nice outfit and a great haircut. You're like, "She looks good out there." 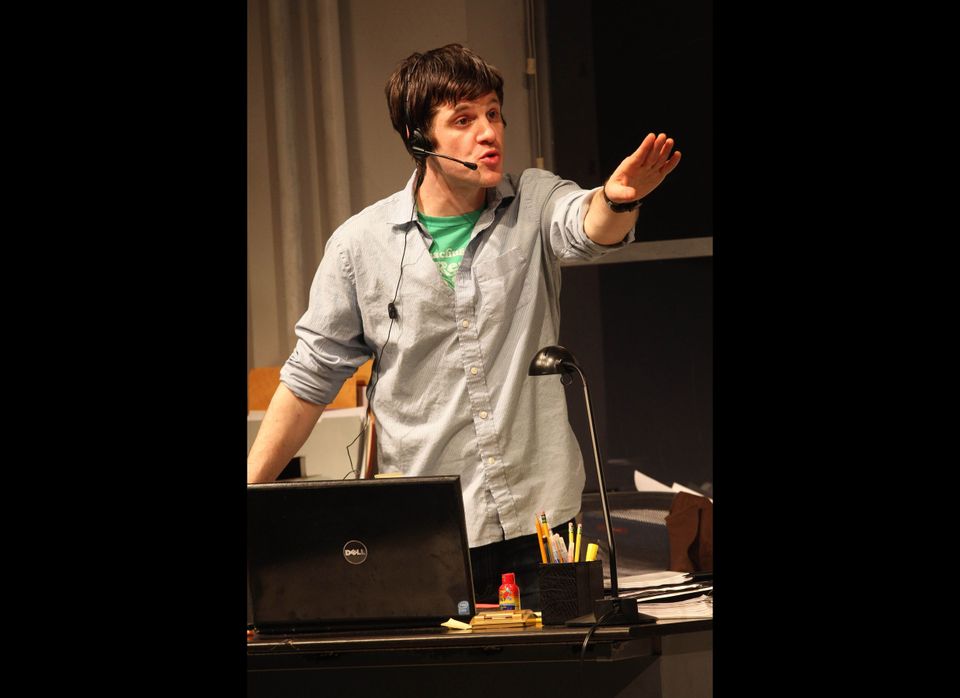