A few weeks ago, a grammatically incorrect billboard appeared along Kingston Pike, Knoxville TN's main thoroughfare. The billboard declares, across the Tennessee state flag, "Lesser Government is Better Government." It might have been beneath mention if it hadn't been posted by Martin Daniel, Tennessee's representative for the 18th district and owner of Elevation Advertising. Daniel has been spending a lot of his time micromanaging our schools and introducing more, not less, government control over the enterprise. That fact makes "lesser" an interesting word choice and a revealing error. 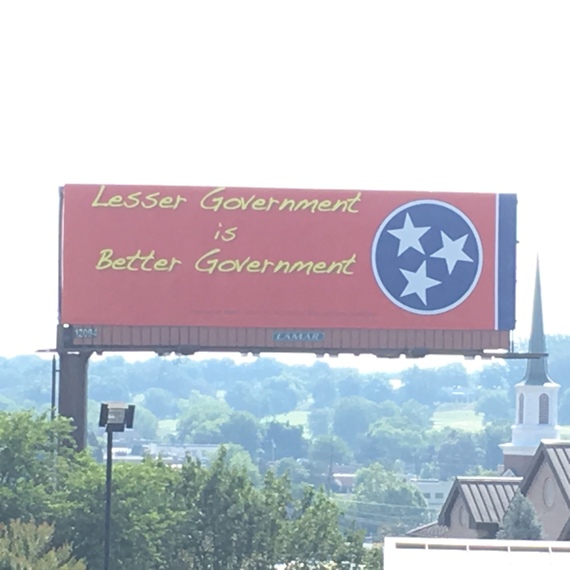 If the billboard had said "Less government is better government," we could debate the issue, but as it stands, Representative Daniel is simply wrong. "Lesser" refers to degree or quality, while "less" refers to amount. Daniel has claimed, without realizing it, that a worse government is a better government, which is a logical impossibility, not a policy statement. One could say that the government of Venezuela is a lesser government than the government of Australia (no offence to Venezuelans, and Australians, pipe down), but to declare something that is lesser -- i.e. inferior -- is better is saying the first shall be last and the last shall be first, but not in a social justice "what would Jesus do" kind of way.

It turns out that social justice is also under fire as part of Daniel's campaign for inferior government. He recently complained to school superintendent Jim McIntyre about his daughter's 4th grade homework at Sequoyah Elementary, targeting a reading assignment that included a story about a boy in a poor (and mostly black) school district. When the boy's mother complained about his tattered and torn school books, the school principal in the story explained that when white school districts got new books, theirs got the hand-me-downs. She then consulted with a lawyer and got the school board to provide the same quality books that the children in the white district have. The exercise was an assignment on cause and effect, in which students had to infer the historical time period of the incident ("around the civil rights movement") to get the correct answer, based on previous class discussions.

I would call that a story with a happy ending, but Daniel didn't like it at all, and he only got madder when he discovered that the week's lesson also included pieces on Sojourner Truth and the Rev. Martin Luther King, Jr. The unit was called "My Brother Martin." Other units focused on animal behavior, the Constitution, ancient civilizations, and space. (Note: McIntyre, who replied personally to Daniel's complaints, has since stepped down from his post, citing a politically dysfunctional climate in the Knox county system.) In his reply to the superintendent, which he also sent to the Knox county and state boards of education, the governor, the textbook commission, and a few others, Daniel opined: "What purpose is served by introducing lessons of social injustice to our young children via a course assignment in Reading? Are our children being taught to assume that everyone who has difficulties in life is a victim of oppression? Should those children who simply attend good schools feel guilty? Should those children who otherwise enjoy the benefits of their parents' hard work and resulting success be made to feel guilty?"

You can read Daniel's entire letter and more about the story in this Nashville Scene article, but let's get right to it; the key word here is "guilty." His concern about feeling guilty shows that he is simultaneously aware of his own socioeconomic privilege and oblivious to its implications-- a matter of concern to all of us as long as he's a state representative. I share in his relative privilege as someone who was able to buy a house on the edge of the Sequoyah neighborhood, where home prices are high because the schools are excellent, a causal claim that is neatly reversible: rich neighborhood, good schools; good schools, rich neighborhood. I didn't feel guilty about sending my son to Sequoyah a few years ago; I felt fortunate. My good fortune makes me feel called to work for better funding for education for all the children in my state, and my experience leads me to believe that supporting education and educators is the best thing legislators can do to keep American society healthy. In a follow-up interview, Daniel asked: "Why does a 4th grader need to learn about race?!" Sequoyah had only 9 black students (out of 452) in the 2014-2015 school year. That's less than 2 percent. Zero students were identified as Latino. Only 9.5 percent of Sequoyah's students are deemed "economically disadvantaged," as opposed to 40 percent of the students in Knox County schools and 57.9 percent in the state. That is the answer to his question.

Daniel's outburst about Sequoyah Elementary's reading lessons won't come as a big surprise to those who caught his recent comments about Muhammad Ali on Twitter or who have been following his attacks on the Office of Diversity and Inclusion at the the University of Tennessee. Using lots of legislative time and effort, Daniel and his colleagues have passed interventionist legislation that closed the Office of Diversity and Inclusion, which had helped UT stay eligible for millions of grant dollars, supported the PRIDE center, and sent messages about racial diversity that were resulting in real recruitment gains. Daniel and other TN legislators rode the wave of a few high-profile, sensationalist, and phony FOX-news stories about gender-neutral pronouns (never mandated) and a "War on Christmas" (didn't happen) into the spotlight while embarrassing the University. Originally, there was no story on campus (I heard about the pronoun flap when a friend texted me from New York) but the faux-news stories created real protests, substantial ones, with hundreds of students who were furious about the assault on the Office of Diversity and the attacks (literal and rhetorical) on the PRIDE center. Congratulations, legislators; you created quite a few new activists.

The Very Big Government efforts of TN legislators have cost the University alumni dollars in every political direction and catapulted UT backwards in national rankings on campus life, diversity, and matters of race. They have also jeopardized the institution's SACS (Southern Association of Colleges and Schools) accreditation, which mandates that the university's governing board be "free from undue influence from political, religious, or other external bodies" and "protects the institution from such influence." In the wake of this legislatively manufactured controversy, the departure of Vice-Chancellor Rickey Hall and, most recently, the announcement that Chancellor Jimmy Cheek will step down, it will be hard to prove that this is not the case. Making a political target out of the University might win a legislator a temporary victory, but it isn't serving the public. UT is still fundamentally healthy and an excellent university, and Knox county schools still get top ratings, but if our own legislators keep attacking them, that excellence won't last forever. And if that's what this legislature really wants, then God help us all.

Representative Daniel seems determined to provide the people of Tennessee with a lesser government. It's time to expose the "lesser government" ruse for what it is--more government intervention, more control at the top, and a flat-out mistake. He probably got an excellent deal on the "Lesser Government" sign since he owns the billboard company, but perhaps this self-described advocate of free speech should have paid a proofreader. Sometimes, it's the things you can't see that can hang you up the most.