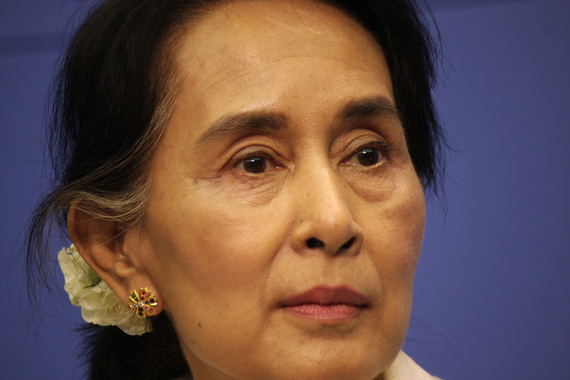 As the holiday lull ends and American presidential campaigns ramp up, it's a good time to look at the example of a leader in another part of the world: Burma.

Why Burma? Burma (renamed Myanmar by military rulers), is where Aung San Suu Kyi is preparing for her party to assume leadership in Parliament in March. Her National League for Democracy swept an astonishing 78 percent of the seats in fall elections. One can only imagine the joy, relief and exhaustion the Nobel laureate must have felt, having led the struggle against military rule since 1989. She spent 15 of those years under house arrest. It's instructive to note some of the first things the democracy leader did after the election victory:

First, she spent time meditating. She took time to calm her thoughts and restore her energy after months of expending herself on the campaign trail. Leaders who are pulled a hundred different directions by advisers, supplicants and commentators need time to think deeply and "fill the well." They seldom get the time. They should insist on it.

Secondly, when Suu Kyi resumed public events, she led a national cleanup day. The 70-year-old put on a pair of plastic gloves and urged everyone to join her in picking up plastic bags and rubbish. Don't just stand there, she chided photographers, come help. The symbolism was Gandhi-esque. Our problems are many, Suu Kyi implied, everyone must pitch in to rebuild their broken country. She's right. She's the public face of reform, but she can't do it alone. Third, Suu Kyi extended a hand to the military leaders she had just unseated. She sought out current President Thein Sein, a former general who had been part of the military junta that kept her locked up. They discussed a smooth transition. She also met with the Commander in Chief of the Army, Min Aung Hlaing, because the army still controls key cabinet positions and 25 percent of the Parliament. They discussed cooperation.

She even met with former Senior General Than Shwe, who had presided over the ruin of the country for two decades and amassed a vast personal fortune. It was Than Shwe who used the military to destroy ethic villages. It was Than Shwe who callously denied aid to cyclone victims and ordered attacks on unarmed monks.

The aging and ailing general no doubt wanted to test if Suu Kyi would seek vengeance on him and his family. Apparently not. Instead, she has invited the military to help rebuild the country. She carefully studied the reconciliation process in places like South Africa and Czechoslovakia during her years of house arrest. She understands that violence and recrimination usually beget more violence. With power now within her grasp, she has pledged to be merciful to the people who were not.

Fourth, she met with ethnic leaders and assured them they would have a voice in the government. The offer of a seat at the table was a message that needed to be heard. Much still needs to be done to resolve the bloody ethnic conflicts that have gone on for more than 60 years. But inclusiveness signals respect. It opens to door to dialogue. And dialogue opens the way to change. The process is sure to be messy. But the alternative is worse.

Yes, there continue to be complaints about what Suu Kyi has or has not done. There are concerns she doesn't have enough bench strength to run the country, that her inner circle's too small, her temperament difficult. It's still uncertain whether constitutional barriers can be overcome so Suu Kyi can serve as President herself someday. But she is already demonstrating leadership in direct and indirect ways that are worth noting:

• Build bridges with your rivals, as Abraham Lincoln did.

• Open the tent wider to people of differing backgrounds.

Those goals are easier to say than do. Burma is no exception. But saying them is certainly a welcome contrast to an American election year dominated by negative personal attacks and catering to special interests.

They are also a needed example for parts of the world where democracy and rule of law are in jeopardy. How many developing countries around the world can be named where power has been handed over peacefully by authoritarian governments -- and where the presumptive leader has called for forgiveness, inclusiveness and rule of law? That's precisely why Burma remains one of the rare success stories of 2015 and its transition deserves continued attention in 2016.

Rena Pederson, a former speechwriter at the U.S. Department of State, is the author of "The Burma Spring."