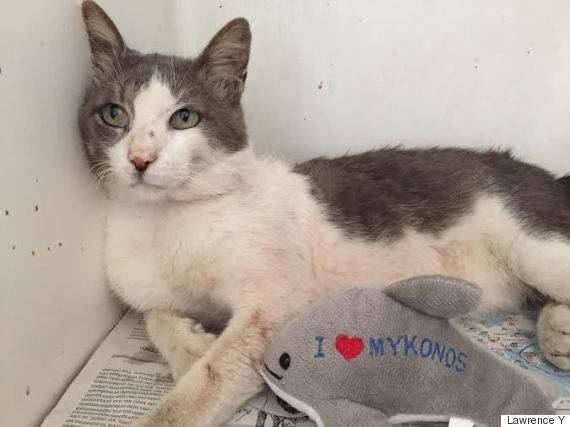 Odysseus is recovering at Mykonos Vet awaiting to see if someone can adopt him in Greece.

I recently had a conversation with some friends about Arianna's new book, Thrive, and the zeitgeist of today. I do agree that Western societies are at an inflection point -- that we are experiencing a collective wake-up call about the deeper meaning of our lives and social purpose of our organizations outside of material success.

A few nights ago, my friend Julien and I had an extraordinary experience that aligns with these conversations that we wanted to share. We came upon a distressing scene on the cascading street steps in front of our little rental house in Mykonos: A woman was weeping and crying out in Italian next to a grey-white stray cat that was sprawled out in a pool of blood struggling to live.

More than a dozen people emerged speaking a cacophony of languages grasping for ways to save the cat. So, we focused on finding a Greek person from the island who could help.

Just at that moment, a friendly merchant appeared. He explained it was the day of the Ascension and no clinic would be open. But the assembly of neighbors would not yield. After exhausting almost all the options, the merchant called and found one vet willing to open his clinic.

With a local waitress on a motorcycle to guide our jeep, we raced the cat -- that the assembly had bundled in a box -- to the clinic. We meditated and soothed him, encouraging the cat to stay with us. He shot back innocent sparkles from his eyes.

When we arrived, Kostas, the vet, was waiting in his clinic beaming light from atop a hill overlooking the town. Kostas found in the little cat a deep stab wound from a knife still gushing blood. (We have since learned there are adolescent boys who taunt cats in the neighborhood.) With no staff at hand, I assisted the operation for one hour as we stitched the inner muscle and then the pelt of the cat.

The cat survived and we were thrilled. We tucked him into bed at 10 p.m. only to learn the following morning that he may not be able to walk. Julien has named the cat Odysseus, and we are hoping to learn in a few days that he can continue to survive the voyage.

In light of some of the reflections we had been sharing together with some friends a week before this incident, I have been pondering the meaning of it all.

One message is clear: The endgame of cruelty need not prevail; collective human compassion and intelligence can overcome it. Still, it takes an outpouring of kindness to overcome one act of cruelty and it takes believing that the first can trump the second.

No matter the trauma that Odysseus endured, he never exhibited fear of the assembly of neighbors. Just the opposite -- he seemed to believe that it was the first that can prevail in humans.