The creeping light of dawn tiptoes down the dark hallway, creeping past girls fast asleep in their creaking bunk beds, creating a canvas painting the tale hues of dawn. An earth without her sun gives a chill that runs up your fingertips and courses through your limbs. The sun meets the sky and spreads like an open hand, reaching a vast sea of orange­ blue, her fingers climbing higher and higher as they bloom and begin to shout across the sky.

The sun rises and sets for both no one and everyone. It saw us in our first, most raw form in which we came to see our first sunrise. Everyone shares the same beginning and end, from our very first breath our ends are sealed to an inescapable fate. We all enter and exit the world, no matter the privilege and disadvantage implied by our identity. As the sun oversees from above, we stand before it equal.

Our intrinsic worth is oftentimes forgotten, masked by a shroud of doubt. But the sun shines down with the light needed to see past the dark. This flickering gleam guided me inward, and I was able to peel back each layer and uncover my own self worth. Years steeped in misconceptions, social stigmas, and microaggressions had trampled my worth to where I forgot about equality. I trapped myself into believing I wasn't enough in order to be something. I repackage myself to fit this oppressive mold.

As a little girl, I was told I held the power to make even the wildest dreams a reality­­ and I believed this with every ounce of my being until the voices around me expanded to include a larger circle of people, who changed this message.

In elementary school, being smart made me feel powerful and was used as a tool to quantifiably measure my own self validation. That feeling, a combination of exhilaration and pride, that came from knowing I was the first to shoot my hand into the air; the sense of absolute certainty and confidence I had in myself was intoxicatingly satisfying­­ I was something of an untouchable phenomena. But this constant fight to upkeep this image of perfection was a fragile and volatile state to constantly strive for; I soon was awoken to a reality I did not want to accept, a reality that perfection could never be met.

Yet, I still wanted to protect this personae, of my then ideal, to mask what I perceived to be my shortcomings. At the time, my vision of perfection was someone more than smart, someone whose mind was able to conquer the unimaginable. I met my heroes ­­Marie Curie, Sally Ride, Clara Barton­­ through the children's biographies that lined my bookshelves. They all had their own uniform, and so I too adopted one of my own: a denim, green jacket from The Gap and a plain t­shirt. Along the way, I had somehow internalized the message that being feminine was synonymous with being meek and inept­­ another facet of what I tried to conceal in my projected identity of what I thought was perfect.

In middle school my opening, developing social eye was stimulated and calibrated in an environment of casual gossip and lies. Manipulation as a means to protect one's status became the norm. Being smart was no longer what I strived for­­ on the contrary it became obstacle in achieving my new idea of perfection. All I wanted was to be wanted by the boy who sat next to me in history class and the girls who were supposed to be my friends. Intelligence was no longer a valued characteristic, if not looked at with disdaining disapproval; it separated me from the people I wanted to be just like. I adopted a new costume of catiness, hair constantly twirled around my finger, and "friendships" built on a shaky foundation of rumors and false promises. I dressed for this battle of compensation donned in an armor of cherry lipgloss, hot pink nail polish, and words that were deceptively double­sided. Again, I went to great lengths to build a "better" version of myself, even if it meant ignoring the real version of myself.

Paradigm shifts and other perspective altering revelations happen in the most un­profoundly simple places. In front of the sun, I looked at myself and locked eyes with my own reflection- here, I­ saw myself without any of the illusions that tried to conceal or embellish what I thought I lacked. For once, my feet stayed put and my eyes did not look away,­­ no longer feeling the need to run from my own self.

A truth so many forget, and yet a truth so real and so charged with life, power, and strength: to believe and to know you are enough. 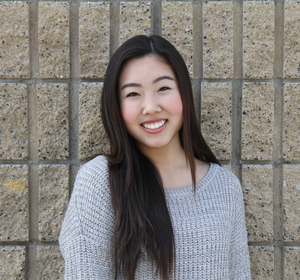 Morgan is a student from always sunny SoCal. She is passionate about giving a voice to the underrepresented, providing help to the overlooked, and peanut butter. In the future she hopes to find a career in the intersection of global health policy and culture to create effective, sustainable solutions.