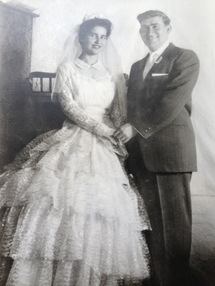 My parents wed on a September morning in 1960 in a small farming village in Greece. My mother learned the news when the busses started to arrive delivering the guests. She was just two months past her seventeenth birthday. There was a rented white dress that was a few sizes too large, a severe brother who had brokered the deal, and a much older groom who wanted to bring a wife back to America. She had met him only once, and what she remembered from that encounter was that he'd told her to walk properly rather than skipping like a donkey. She was one of ten children, and normally the girls would be married off by order of age, oldest to youngest. It wasn't her turn, but the family's crushing poverty and crowded house allowed for an exception to the rules.

My father was born in a tiny mountain village surrounded by mountain ranges, where the earth glowed red and the wheat harvest produced a vibrant golden yellow grain. Bougainvillea, pomegranate, geraniums, fruiting trees abounded, but so did poverty, invading Germans, danger, and a suffocating feeling of entrapment. I imagine the idea of escape gnawed at him. He brought his baggage with him when he finally did run down the mountainside in the dark, hiding from soldiers, breath held. His baggage carried stories about his only meal being onions and bread, and the time his mother had one egg and split it between him and his cousin. He never forgave her for not giving him the whole egg. An uncle in America had offered to sponsor one brother, and my father lunged at the opportunity, leaving his family behind.

After several years in America, he returned to Greece for a wife. He needed someone to cook and clean for him and to take care of his needs. And so it began. A poor young girl in a rented dress too large, collarbones showing from hunger. A groom with a fancy wool suit and a cream-colored tie. It was the beginning of their arranged marriage, a marriage devoid of choice.

As a child, I came to understand that my parents would constantly be at each other's throats. My mother was beautiful and fiery, like a caged animal pacing until it struck. My father gathered his suspicions like a bag of shrapnel until they would explode, striking anything in his path. He was often mistaken for her father, which only fueled his insecurity. He dropped me off at elementary school one morning, and before saying goodbye, he paused to ask me, "Do you think I'm handsome?"

Despite their constant fighting, distrust, and acrimony, they stayed together 50 years, until one morning, my father died in his bed at home after many years of illness. My mother had spent the previous 18 years caring for him after a debilitating stroke. She was the epitome of devotion and martyrdom.

These are the lessons I took away from my parents' arranged marriage:

It's better to pick your own spouse. When they were married, choosing who you married was unheard of. I remember a cousin in Greece "marrying for love" in the 1980s and it was high scandal in the family. I was always determined to pick my own partner, and vowed I would never marry a Greek man. When I came out as a lesbian, I realized that I would shatter all cultural expectations, and while I suffered some guilt, I knew that my happiness was at stake.

You can stay with someone for your whole life, even if you are completely mismatched. This was certainly the case with my parents, and for many years I carried this as a badge of honor. I took their commitment as proof of loyalty and stability. I was proud of my parents for never divorcing, even though they both suffered together for 50 long years.

Children do not benefit from unhappy parents. Despite being grateful that my parents never divorced, the truth is that my sister and I lived in a battle zone. We never witnessed a healthy, loving partner relationship. Neither of us had that model to refer to when picking our own partners. Our partnership model was one of strife, control, and distrust. It has taken me many years to learn how to be comfortable enough in my own skin to love someone enough to let them be comfortable in theirs.

It is okay to call it quits. I walked away from my childhood believing that staying together no matter what was the ultimate goal, a source of pride, and proof of honor. I still think there is honor in working extremely hard to stay together. But only if staying together supports you to feel whole as an individual. If, by being with someone, your soul and purpose are enhanced. Otherwise, it is much too easy to fall into stagnation, a forgetting of oneself for the sake of the staying together.

Children survive divorce. As a child, I often thought that the fighting would only stop if a family member died. I felt death would bring my family to their senses and help them to see what was important in life. Imaging death should not be a child's coping strategy. I see now that divorce can be a healthy option. No one has to die! If parents are able to cushion and support their children, and manage to co-parent separately but cooperatively, children can thrive where they once withered.

Even though I have chosen my own partners, and luckily escaped the arranged marriages proposed in my youth, I still carry these lessons in my pocket. Always be true to yourself, and have the courage to ask, Is this marriage still working for me? If it is, great! If it isn't, it is okay to begin anew. Don't stay only because you once arranged it for yourself. Stay because you want to be there today. And remember, the world is a huge wonderful place full of unexpected surprises and people you have never met.