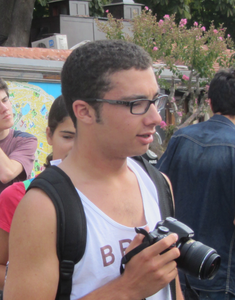 The plane lands at a small airport surrounded by dead yellow grass. Endless old beaten-down cars and trucks speed down the highway. I am in Istanbul. I have traveled halfway across the world for a family reunion on the Iranian side of my family. However, it is the lessons from the African-American side of my family that inspired me to embark on this adventure.

Rewind eight years. I hit the ramp hard. My bike follows, tumbling on top of me. I get up and immediately hear the laughs; they sting more than the aching in my shoulder. Everybody in the skate park saw me. I could not escape the jarring commentary on my fall.

I was only nine and I loved BMX, but was just learning. A few months later at our family reunion for the other side of my family -- the African-American side -- in Las Vegas, I told my cousin Harry that I was frustrated with the taunts and wanted to quit BMX. Harry interrupted me, "Son, I don't see any reason for you to quit doing something you enjoy. Bijan, just because you fall down a few times and embarrass yourself doesn't mean you just give up. That's life...You should never give up on something you love."

I did not quit. In fact, I practiced more. My own sense of adventure matured as I learned more about my much older cousin. I once saw him hop in and out of the cockpit of a P-51 Mustang like a kid on a jungle gym. He was 90 and could still pull it off. Harry started to tear up sitting in the cockpit, remembering how he and three other Tuskegee Airmen had won the USAF's first Weapons Meet of 1949 to determine the title of Top Gun. However, they were barred from receiving recognition because they were black. The Air Force officially recognized their victory 46 years later.

I was glad I followed his advice when I entered my first BMX competition at age 12. I started my run down the ramp with my first trick in mind, jumping with an X-up. I hit the ramp and while in the air I crossed my arms in the form of an "x" so that the handlebars would turn 180 degrees. I quickly reversed the process before landing so I wouldn't wipe out. After that first trick I felt more relaxed and performed simple tricks like 180s, fakies, bunny hops, manuals. I fell a few times, but nothing could replace the thrill, the rush and the challenge that I continue to experience in BMX.

I furthered my sense of adventure by taking up snowboarding the following winter as well as jumping into the world of theatre where I love working on the crew. I could not resist the adventure to travel halfway across the world to learn more about the other side of my family in Istanbul last summer. I rekindled connections with family members that I hadn't seen in years. Since then, I have become very close to Sue, my younger cousin who lives in England. She has been coping with people's negative reactions towards her bisexuality. We talk almost everyday on Facebook: "What they think doesn't matter. Being yourself is a key ingredient to life. Don't let anybody make you feel bad about who you really are and how you live your life." The words I type on the screen to Sue echo the wisdom passed on from Cousin Harry.

Helping Sue come to terms with her identity has led to my interest in psychology. I now want to obtain the academic foundation that will allow me to help others overcome issues related to identity, depression and stress. Along the way, I can also inspire others to embrace adventures that can lead them to new passions.

Bijan Saboori, a graduate of Cleveland's University School, is a freshman at American University.