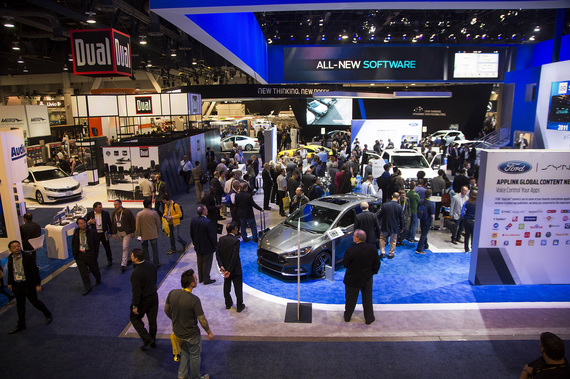 I have just returned from Las Vegas, where I joined tens of thousands of gamblers on their yearly pilgrimage, looking for, praying for, the Big Bet.

To give you context, I was attending the annual CES (Consumer Electronics Show), an event that I have been attending since 1996 -- and to give you some more context, the DVD was introduced at the show that year.

And a little more context: COMDEX -- which in its day was one of the largest computer shows in the world (a show that I also attended) -- closed its exhibition floors in 2004 when it could no longer compete and the industry swung its support behind CES, finally understanding that consumers do buy computers, and that business people are consumers, too.

But here is the most important context -- my mentor and friend Irwin Gotlieb, during his legendary tour of the CES Show Floor, recounted that when he first attended COMDEX to buy a computer for his office, 1 gig of memory cost in the vicinity of $400,000; today that same 1 gig costs less than two pennies, and therein lies the dynamic of betting today: As costs go down, so do margins, and the need to hit big and fast is critical -- just ask Amazon about Fire Phone.

This year the show expanded, yet again, and the miles of exhibition hall rows and the endless hotel suites and the myriad meetings in cafes and corridors were populated with everything from the latest chip technology, to smartphone batteries that recharge in seconds, to cars that park themselves in parking lots, to monitors that connect you with your doctor, to drones, to mind-blowing virtual reality, to home of today's future, to yes -- the latest and greatest large-screen TV sets and one of my favorites, a home-sized dry cleaner/presser, and more stuff in between and around than you could ever imagine.

Here are some links that are worth following to get a good view of the range:

The Year Ahead in Ad Tech by Rob Norman

Hebrew and Chinese were two of the critical languages spoken at the show, as the "start-up nation" and the "developing empire" fielded many of the most interesting and promising technology and applications (not apps).

It's also important to understand the shift in power over the years, as Samsung and LG gain in prominence, Motorola disappears, Sony shrinks, Microsoft is no longer on the floor, and Ford and other car manufacturers take pole positions while Intel continues to be a powerhouse.

Enough background. Let me share my thoughts and the learnings I took away -- and as I said, I will not comment on specific items; there is just so much already well-written and I would only add to the clutter.

What I found fascinating was the punditry around technology and how the show wasn't about objects; somehow it was really about Digital magic, Big Data and the future -- and it was for sure, as it always has been, but in the end, product trumps as the short-term bet is what can be sold.

I'd like to take a slightly different view and suggest a few new names for CES, names that helped me better organize my thinking and my takeaway and more -- setting up the long-term opportunities and bigger bets around what can and will be.

The Converged Everything Show: My readers know my mantra: Digital is everything, but not everything is digital. Folks, it's all converged -- that story is over and getting boring -- but we haven't yet delivered on the full promise of a converged world. Appliances talk, but to whom? And why? How many wristbands am I really going to wear? My clothing, my toothbrush, my car, my phone, my watch -- where is the common platform? Where is the real vision for my life and not just for another advertising platform? Let's be clear, the Netflix look-alike of China has just invested in driverless e-cars -- why? Convergence! You get the picture -- convergence is powerful and the future belongs to those who can leverage convergence for our benefit. It's here, and now.

The Connected Efficacy Show: Again, my readers will recognize this thought. Business models are key. Use cases are critical. Convergence is powerful. So what? Good news: For the first time I heard people talking about the benefits of connectivity/convergence. The fact that your car can turn on your lights and air-conditioning/heat when it's a couple of miles from your house saves countless dollars in aggregate. Doctors connected to their patients monitoring health stats and compliance will save lives and money too -- good for all. Talk to me about how connectivity helps save the world.

The Consumer Engagement Show: I'm tired of hearing the digital story. I want to hear the human story. I want to hear why it makes my life better; I don't want to hear that it's all about Digital. Some, like David Shing, the Digital prophet of AOL, get that point; as do, by the way, the leaders of some of our biggest social platforms. Make it all about me. I want to engage, but I'm not locked in some cave looking at a screen; I live a full life, interacting with people and places, going to restaurants and shows, creating seismic effects at sports events; bottom line is, it's all about engagement -- not the shiny object, not the operating system, not the Big Data feed -- ME...

The Content Enhancement Show: At the end of the day, everyone, from the wearable designers to the TV manufacturers to the chip makers, and everyone else in and around them, is obsessed with content. Seems that everything leads to content. Every engagement has a content potential, and in a converged world content can be had anywhere. Some of it is Hollywood envy or what we call star f@#%$ing. And some of it is real and brand centric and delivers huge value. Makes no difference -- content is on just about everyone's mind.

So to summarize: We live in a converged, connected world where the efficacy of engagement will drive success and where content, my friends, is still king, driven by informed data and viewed wherever the viewer wants and whenever they want it.

And there you have it. Yes; it's digital; yes, it's data. But in the end those are only the means; the ends are very human.

By the way, I didn't discuss security, nor did most; think about that as you peruse electronic gyro roller skates, one of my favorites.

All in all? You make the call: See if you find my taxonomy useful, versus the usual; and order your hot products now. I did.

P.S. Each year, as I continue to report on CES, the show gets bigger and bigger. Isn't it interesting that no one has suggested it will become digital?