My dad is big on talks.

A man raised in Nigeria under the kind of strict parenting that favored the rod (or in his case, a switch) over thoughtful conversations, he's enjoyed being able to share his worldview with his three children.

Sitting at the long glass dining table that served as his office desk, my dad would put on his reading glasses, lean back in his chair and bellow for whichever child needed to hear the lesson he had brewing that evening.

I hated it when it was my turn. Filibustering Congressmen have nothing on my dad -- I would stand and fidget, moving my weight from one foot to the other, as he launched into story after story: tales of supporting his family "back home" when he was my age, why a solid education was incredibly important, why one couldn't let discrimination get in the way of their goals... Really, the list covered everything from good hygiene to financial literacy.

After an hour of more of lecturing, he'd see his audience had had their fill of wisdom for the night.

And you know what? ... He was right. In honor of those long evening talks, a part of my adolescence I'm surprised to say I sorta miss, here are a list of the five Papa Akitunde lessons I find myself calling on in my adult years:

1. "Tomorrow isn't promised anybody."
Procrastination and I are tight -- we're BFFs, in today's parlance. My dad tried to nip this tendency in the bud by repeating this phrase to me. The message: Do what you can sooner, rather than later, because you'll never know if that opportunity will be there when you're finally ready. It's what I hear when I delay writing an article, or replying to an important email.

2. "The friends you play with in the sandbox aren't always going to be the ones you're going to be playing with in the boardroom."
My dad and I are the social butterflies of our family. But while my dad has an easier time reassessing friendships that have run their course, I agonize. During a conversation about how hurt I was that a childhood friend and I were growing apart, he said that golden line. And it's true -- friendships morph and change, and that's OK. I can appreciate who that person was to me when I was younger, and recognize that part of our relationship had gone as far as it was going to go.

Bonus: "If you have more than two best friends, you're in trouble." This especially bore out in the he-said-she-said days of middle and high school where I would find myself pulled into "friend" after "friend's" drama, but who were MIA when I needed them. My dad always stressed the importance of knowing who your real friends were versus "Hi and bye" friends.

My dad has lived this rule far before I came on the scene -- seeing pictures of him when he was younger, there was never a hair out of place or a wrinkle to be found on his wide-lapel leisure suits. It's a lesson he passed on to me, though I fought it for years, being the tomboy that I was.

He styled my hair in ways that rivaled most moms when I was in elementary school, taught me how to press my jeans (back when that was cool) and taught me it's far more important to be comfortable in an outfit than be on trend.

4. "Give people enough rope to hang themselves with."
This is one of my most repeated Papa Akitunde maxims. It means be generous with second and even third chances, but know when to cut a person out of your life when they do more harm than good.

5. "Show someone how much you care today, so you won't have regrets when they're gone."
My dad's office is filled with documents, photos, notes, and books he's acquired over the years. It also has some sad memorabilia as well -- obituary notices and funeral programs of friends and acquaintances who have passed away.

Showing someone how much you care through actions, more than words, was a lesson he shared with my brothers and I when we were kids, and with increasing frequency as he gets older. "You don't want to be crying at a funeral, saying, 'I love you, I love you,' when someone's dead and gone," he'd say knowingly. His message is clear: Enjoy and make use of the time you have now before it's too late.

See Dad? I was listening. 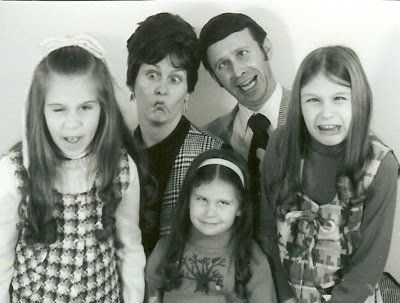 1 / 16
Lori Lavender Luz learned a lot from her father (including how to make a funny face, as seen in this 1970s family Christmas photo). "We both know that repeating things ad nauseum to kids annoys them now but they’ll thank us for these words of wisdom someday," she wrote. Read more: <a href="http://lavenderluz.com/2013/06/my-fathers-daughter.html" target="_blank">"Top 9 reasons: I'm my father's daughter because..."</a>
Courtesy of Lori Lavender Luz