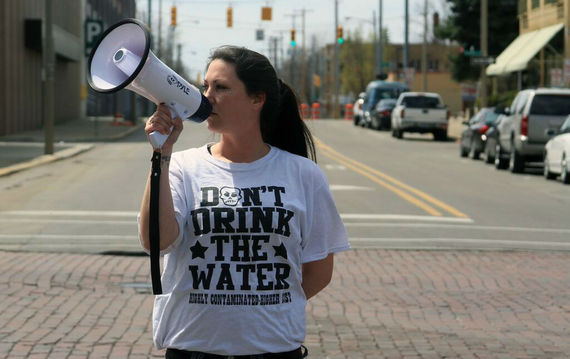 In Flint, Michigan, the camera crews have packed up after the Democratic presidential debate at which the city's water crisis was a favorite topic. The Members of the U.S. Congress have concluded their fact-finding trip to look at the response to Flint's poisoning through polluted water. The lead pipes are being dug up and replaced. The crisis in Flint has passed, right?

After initial crises subside and public attention wanes, there is a risk that progress will slow and those in need will be forgotten. Flint residents know all too well what it means to be ignored and left behind. They also know how to demand action. Amid the total failure of management and oversight that allowed Flint's water supply to be drawn from the polluted Flint River for more than a year, it was the community and its allies who broke through institutional resistance and compelled the local government to fix the problem.

There are crises of this sort across the country, with communities facing shortfalls in in public health, employment, education, law enforcement and a host of other areas. Because public attention and resources always fluctuate, communities must demand dialogue with public and private leadership when they fail to meet even the most basic needs of residents--and keep up the pressure once people are paying attention. Flint residents are showing three effective ways to go about this, and their efforts hold important examples for communities in crisis.

Almost immediately after Flint's water supply was switched to contaminated water, residents noticed disturbing changes in the smell, taste and color of their water. And just as quickly, they began using social media and public protest to declare their valid grievance. They found many deaf ears, but that spurred louder voices. Those voices continue to speak out today.

Social media is a powerful vehicle for expressing the popular will, and so too are organized marches and protests. The press is also needed. Community advocates and leaders are positioned to bring concerns to the public square and to the attention of professional and citizen journalists, who can in turn raise the message to a level public servants cannot miss or ignore. This forces a dialogue between stakeholders. The idea is to speak up with all the means available to you--and to do so relentlessly.

Rallying cohorts and building coalitions around similar interests can help break through opposition. There is a growing coalition of groups in Flint working to address what will be life-long consequences for the thousands of people who were exposed to high lead levels. This is critical. Even after the lead pipes are replaced, the health impacts contaminated water has had will span a generation.

For example, many Flint residents live in what are called "food deserts," where they lack ready access to retailers selling healthy food. Beyond obvious health benefits, fresh fruits and vegetables also help reduce lead absorption. Encouraging the growth of venues for accessible fresh food in Flint neighborhoods will impact the community's long-term recovery from the water crisis. The Flint Farmer's Market has been an oasis of fresh food in the city, but one market isn't enough. It will take collective effort from many stakeholders to expand access to fresh food in Flint.

It took proactive effort from doctors and other scientists to prove that Flint's water was dangerous. The catalyst for their efforts was, in part, the public demand for dialogue on whether the water was safe. The efforts of these professionals set off a chain reaction that made the crisis an undeniable public priority. For her efforts in bringing the water crisis to light, Dr. Mona Hanna-Attisha (as well as former Flint resident LeeAnne Walters) will be awarded the Freedom of Expression Courage Award by the literary group PEN America.

Doctors aren't the only professionals who can amplify community voices, affect change, and find personal and professional rewards for it. As well as promoting the public welfare, there are often incentives for professionals to work with communities on a pro bono basis. In the legal profession, for example, there are programs that reward lawyers in the form of continuing legal education credits for supporting their local community. For lawyers, teachers, scientists and others, don't just lament societal ills; find a way to take action.

Flint must not be forgotten, but in time, public attention will dwindle. It's the same story in cities across the country. The measure of community resilience in Flint and throughout the United States will hinge on how we respond to crises as narrow as contaminated water and as broad as Hurricane Katrina. Our hope lies in overcoming these crises and recovering from them through passionate and forthright dialogue.