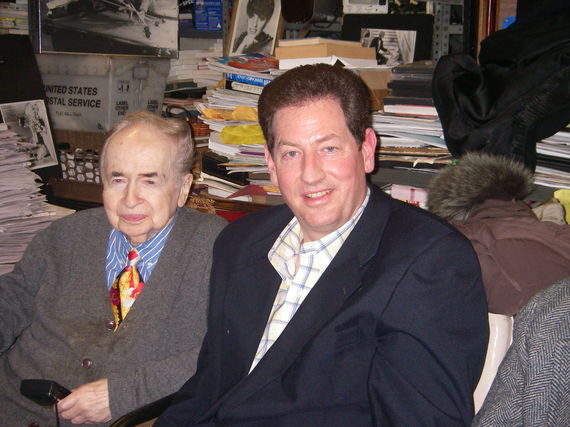 I first met Joe Franklin in late November 2014 in his beautifully cluttered Times Square office, itself a "jumbled museum" of 20th century American pop culture. Amidst luminous photos of Frank Sinatra and Lucille Ball, and a kitschy, colorful poster from one of Bob Hope and Bing Crosby's "road films," a coffee cup used by Rudolph Valentino in 1927 was rumored to be lurking somewhere.

I sat down, facing the King of Nostalgia himself, in an old chair that said "RCA Victor" on it. The chair had once belonged to Perry Como. It felt vaguely like being home.

In fact, I was on a "full circle" mission to feature Joe as a guest on my own talk show, Public Voice Salon -- an open dialogue on education, the arts and social change that I co-produce with my wife, Claudia. In my big dream segue into television land, following a successful 20-year career as an educator, hopes for my "second act" are kept alive by memories of my grandmother, who was rescued from a London orphanage at the age of 7 and brought to New York by the famous belle époque actress Blanche Walsh -- now forgotten but who, at the time, was America's Sarah Bernhardt.

Despite her amazing "real life fairy tale" theatrical roots in America, my grandmother, who nurtured a lifelong dream to be a singer, never became famous. She did sing to me as a child, however, and, just as crucially, made space for me. Humane space. Space where stories were told and dreams were shared. One of my grandmother's dreams, which she never realized, was being a guest on The Joe Franklin Show.

Joe Franklin was also a creator of humane space. Dialogic space. Already a success in radio, in 1950 he pitched an idea to ABC television that they originally rejected as crazy: the world's first television talk show. Face to face and eye to eye. Cheap overhead = two chairs. As an educator deeply committed to human dialogue, having been influenced by the work of John Dewey, Carl Rogers, and especially Martin Buber -- who, in his classic 1938 book I and Thou, wrote about the spiritual nature of authentic dialogue -- let me dare to place the name of Joe Franklin (a schmaltzy genius!) alongside these great philosophical thinkers. He opened the door for the humanizing potential of conversation to millions, not just an academic elite. Aesthetic talk that always circled back to the movies and music that enrich everyday lives with meaning.

Joe pioneered a democratic version of a Gertrude Stein Salon, infused with a humorous, "carnivalesque" spirit. In his theory of "heteroglossia" (the sound of many discourses), the noted Russian literary scholar Mikhail Bakhtin gave place of privilege to carnival not only in literary history, in particular the novels of Dostoevsky, but as a key element in the democratic public square; which, nowadays, has become strangely smothered with i-podded silence. Margaret Meade, when she appeared as a guest on Joe's show, shared the panel with a man who whistles through his nose. Ronald Reagan came on with the dancing dentists.

What distinguished Joe from so many of today's glib, empty suit talk show hosts, who cringingly worship the "already famous," is that he took chances and gave hope to unknown, struggling artists who he gave their first "big break" to by featuring on television. The list includes Woody Allen, Elvis Presley, Bette Midler, Barbara Streisand, Bruce Springsteen, Al Pacino, Dustin Hoffman, and Julia Roberts. There's a reason Al Pacino, when he spotted Joe Franklin in the audience at one of his recent Broadway gigs, had the houselights turned up and publicly thanked his dear mentor. In his sweet, caring, encouraging manner -- he gave big build ups even to those hapless souls (including yodelers and plate twirlers) he didn't have the heart to say no to -- Joe exemplified a true educator's soul, borne out by research proving the pedagogical value of unconditional praise and support in nurturing the creativity of others. It seems to work better than standardized tests in fact. It's also a strategy I employ in my classrooms, and, one that my grandmother knew instinctively when she hung my earliest art works (crayon and magic marker on paper) immediately up on her back porch "grandkids art gallery."

Joe, who kept alive memories of the past, was once told by an older woman that his shows gave her a reason to live. This could've been my grandmother talking. Once, during a childhood sleepover at her Fort Lee, NJ home in the 1970s, I woke up in the middle of the night to discover grandma in the kitchen listening to Joe Franklin on a staticky transistor radio. Maybe it's true that memories "keep the wolf of insignificance from the door," as Saul Bellow once said. When my big moment arrived and I was actually interviewing the great Joe Franklin, the memory of my grandmother welled up and I sang a few bars of a 1926 song she taught me: "Baby Face." Delighted, Joe joined me in a duet. He even gave me "4 stars!" In our increasingly fast paced and dehumanized society, with our memories and our time under attack from a corporate sector that values profits over people, I treasure these humane lessons taught me by my grandmother and Joe Franklin. To value the art of movies and music. To delight in memories and the telling of stories. And to never give up hope in our biggest dreams.