You see, I married the same person twice; one was a civil ceremony, while the other, a church (Catholic) ceremony.

And neither one was perfect.

My civil wedding happened three months after I entered the United States. We had to do it very quickly to take advantage of my mom being here on vacation at the time. More importantly, we didn't have the luxury of delaying for obvious immigration requirements. I entered a tourist, and ended up being engaged and, eventually, married to a U.S. citizen. (You can read more about this story here).

Lacking in preparation, as well as funds, it meant compromising on a lot of things and forgoing certain traditional elements in a wedding.

I had to go to Nordstrom to buy my (first) wedding dress and it was a champagne colored three-piece gown. It was gorgeous and I've gotten so much mileage out of that dress. But it wasn't white and certainly didn't make me look or feel like a princess.

On my wedding day, I opted to do my own hair and make-up. I didn't see the need to fuss over it considering I was only headed to the courthouse, a quick in and out, and that there was no party afterward. Lunch was served for intimate family and friends at our favorite Chinese dim sum restaurant in Chicago. There was no dancing-the-night-away affair, nor a DJ to play the Chicken Dance, the Cha Cha Slide or Y.M.C.A.

The most imperfect detail of that day was the fact that my groom had a severe gout attack. He was in so much pain that he couldn't help but limp and wince with every step, and it certainly took the element of romance out of the entire morning. At some point it made me wonder if it was a case of cold feet. But no. It was uric acid toe.

Short of a year and a half after that, we finally had our church wedding. We decided to do this for our faith, and to share our union with more friends and family. Objectively speaking, however, I felt it was sort of anti-climactic and was really just a formality. There was not much excitement to it since I had already been married to this man for a year and four months.

We had a guest list of close to 300, but still didn't include majority of my family and friends from the Philippines. Instead, probably close to half of our list was filled with names I didn't know, people who didn't know me either.

For this second wedding ceremony, I did go to a bridal store to get my traditional white dress. But the whole experience was so anti-Say Yes To The Dress. I went in by myself (no female relatives and close girl friends for a cheering squad), showed the associate a picture of the dress I had already picked online, fitted it and paid for it. There was no ambivalence, and definitely no drama and the 'oh-my-God-this-is-it-I-feel-like-a-princess-bride-goddess' moment. Though I loved my dress and thought it was beautiful, my thought bubble was more like, 'Shit-can-I-really-wear-this-all-night-long-and-do-I-really-have-to?' 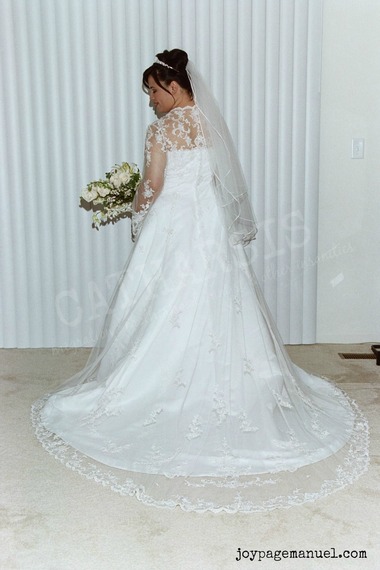 And did I mention how I hated our photographer who eventually screwed us by twisting part of the contract and wanted to overcharge? I was also bloated on that day as it was the time of the month and I don't think he was skillful enough to feature my better angles.

For a perfectionist (now a recovering one), all these glitches felt like shards of glass I was forced to swallow. I had to compromise on a lot of details which made the reality quite far from the vision I've held on to for years prior to finding the man I would marry.

But maybe that was the Universe being kind to me. Instead of feeling like the stars were conspiring against me, I believe the imperfections in my weddings were trying to teach me two things: (1) that perspective can be my best friend; (2) that weddings, like marriages, are never perfect and that the success of the journey ahead depends heavily on the partners' willingness to compromise.

So what that there was no dancing and partying for my first wedding? I never really enjoyed dancing anyway and to be honest, hearing the Cha Cha Slide and Chicken Dance only makes me want to shoot myself in the head.

So what that our first 'reception' was at a dim sum place? We love Chinese food!

So what that neither one of my dresses made me tear up, nor made me look like a princess? In truth, I wish I could've just gotten married wearing jeans and riding boots. And it really doesn't matter that my dresses didn't make me cry because both the officiating judge and the priest did that for my husband and me. I remember the judge saying how comfortable my husband and I both seemed, compared to other nervous, seemingly uncertain couples. And I still remember my husband tearing up, his voice shaking when he was saying his vows to me in church. I would take those tears any day over simply tearing up at the bridal stores.

So what that I didn't like certain small details? Beside me was a man who did all he can to marry me, TWICE, and who was clearly committed to loving me and building a family with me. It doesn't make sense to be upset over the little wedding wrinkles and thorns. After all, as the years go by and our relationship continues to grow, what we truly celebrate is not the wedding but our Marriage.

It's not because we said "I Do" twice that makes us strong. It's that we constantly choose to be each other's witnesses to how our souls are being perfected through our imperfect union.