It's been a dramatic week in Westminster. Yesterday, the Speaker of the House of Commons was forced from office for the first time since 1695. (Seven of his unluckier predecessors were beheaded, so perhaps there's some consolation.) The search for a successor -- who must be picked by MPs from among their number, relinquish his party allegiance, and chair Parliamentary debates -- has brought into focus the debating skills of our current crop of politicians.

The Parliamentary sketchwriter Quentin Letts recently lamented the poor speaking skills of modern Members of Parliament. 'We might have a better standard of oratory from the green leather benches,' he suggests, 'if more MPs had belonged to debating societies such as the Cambridge Union.'

Being accused of making a 'Cambridge Union' speech in Parliament is usually meant as a term of abuse -- the Union and its counterpart at Oxford supposedly being nurseries of clever but immature wit. As the author of a new history of the Cambridge Union, I feel I should join this rallying to the Union's defence. 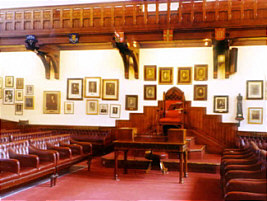 Since its foundation in 1815, the Cambridge Union been somewhere for students to test their opinions and hone their skills of debate -- clashing not only with their peers, but going head-to-head with experts in their field. The Union has attracted a long list of distinguished guests: Prime Ministers like Stanley Baldwin and Winston Churchill; presidents like Theodore Roosevelt and Ronald Reagan; eminent figures like Stephen Hawking and the Dalai Lama. They came not to deliver rigid speeches, but to be cross-examined by a chamber full of challenging undergraduates.

This exposure to great speakers -- and the chance to take them on in debate -- is clearly a huge privilege. But even the less awe-inspiring performances in Union debates can provide important lessons to eager students. Michael Howard, the future Tory leader, recalls watching a senior politician fumble his way through a disastrous speech, drop his notes, and knock a glass of water over the hapless Union Secretary. Such performances, he says, 'helped to disabuse us of any notion that Cabinet ministers were gods from another land.'

Some Union lessons were learnt more brutally. The Huff Post's own Arianna Huffington -- then a second-year economics student at Girton College -- was enlisted to speak alongside J. K. Galbraith against William F. Buckley, Jr. on the motion: 'The market is a snare and a delusion.' If her fellow speakers and the packed chamber weren't daunting enough, the debate was being recorded by NBC. Egged on by Galbraith (whose own speech had gone badly) Arianna interrupted Buckley's flow with a carefully crafted question about the free market. But it was elegantly dismissed. In front of the cameras and the rows of crowded benches, Buckley turned and replied: 'Well, madam, I do not know what markets you patronize...' Arianna confesses it still makes her cheeks burn to remember it -- but it did not hinder her Cambridge career: she was elected President of the Union later that year.

Battle-hardened by experiences such as these, it is perhaps unsurprising that ex-presidents of the Union have prospered in 'adult' politics. Twenty-four of their number have been elected to the House of Commons since the Second World War; seventeen (with some overlap) have entered the House of Lords.

Indeed, the Union can already boast two Speakers of the House of Commons -- W. C. Gully and Selwyn Lloyd -- as well as the current Speaker and Deputy Speaker of the House of Lords. So perhaps it's unsurprising, in their current hour of need, that today's Times advises MPs to turn to Vincent Cable -- another ex-President of the Cambridge Union...