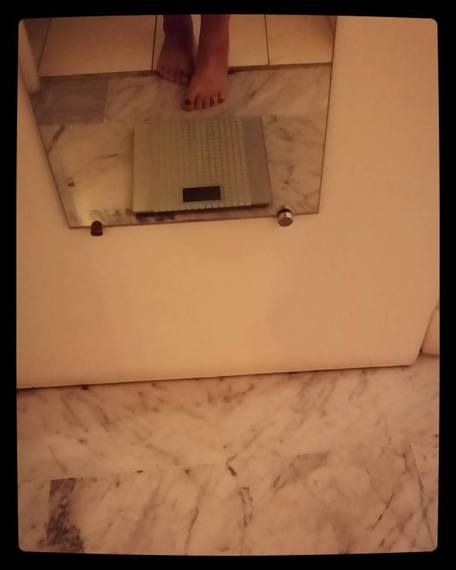 It's check-out day at the diet clinic in Cannes, France. I'm going home! I've been here for two full months, and I've lost 15 kilos (I'm going to get weighed one last time today, inshallah the caviar and vodka of New Year's Eve haven't left their mark). I feel much better than when I came in. But, my knee we now know it is the meniscus and arthritis is not much better (tell that to all those fat-shaming doctors!) Nor have they told me what I need to do to make it better. I'm hoping more weight loss will help.

I'm only about halfway to my goal. And I'm swimming upstream against a 95 percent failure rate statistic. I live in perpetual fear now. I guess some poor girls and women have lived like this all their lives. It can't be a solution. Only mastery over one's weaknesses makes any sense. Good old-fashioned self-control. I haven't made any friends here really. I have some numbers, but I learned long ago that female conversations bored me to death and that I preferred the company of myself to most people. I no longer try to fit in everywhere I go, like I did before. I'm no longer the Zelig of my youth -- I cherish and protect my otherness.

What gives me hope is what I've already achieved. It was a colossal effort to start this diet. To start a diet where you need to lose so much weight is a courageous act if I may say so myself. I kept with the diet. It makes me proud that I was one of the only folk here who really stuck to the diet and never cheated. I owe that to my American upbringing. Americans, for the most part, don't cheat. There may be exceptions but there is a work ethic in the States that I think I've happily picked up. We don't do things half way. I found that out when I first came to Boston and watched in awe how no one cheated on an exam in college even though the professor had left the room. That doesn't happen often elsewhere in the world, or at least not in my experience as both teacher and student.

So I come home not triumphant but humble because I've been here before, at this weight, and not just once. Boy, does that statistical reality loom large. But, I've figured something out this time around that I hadn't realized before and I'm hoping that will give me the edge I need to become one of the 5 percenters. I've realized that the only thing that will work is the notion of mind over body. An old fashioned notion but one that has become lost in the folds of pseudo psychology. The simple notion that my parents lived by before we even had a way to measure BMI and we used the term consciousness instead of mindfulness. The simple notion of the importance of self-control in building one's character has been put on the back burner. My father, born a Muslim in Iran, used to tell me before he died at the age of one hundred, how he used to fast in the adobe tower in his natal village not so much for religious purposes but in order to test the strength of his will. There was a notion that I grew up with, which is now largely ignored by the ever growing diet and health industry: that self-control builds character. But those old fashioned terms, "will," "self-control," "character," you will not easily find in the diet and health literature.

All efforts are aimed at making the dieting easy. You are not taught to eat less but to eat better things. You are not taught to wait and be patient between meals instead you are given healthy "options." The point is that snacking itself is the problem not just what is being snacked. The constant need to stuff one's face is the problem. Of course, it is easy to see why the industry has gone that way. Self-denial doesn't sell. You can't sell vitamin water and protein bars with ascetic notions. Also, telling people to be mindful sounds more exotic than telling them hey pay attention to what they eat, how they live, and what is happening around them. You can sell them endless meditation apps. with that one. But, really, all it means is good old fashioned consciousness. In the sixties and seventies, we called it consciousness raising, mindfulness was just that, but I guess that old term is too hippie or too political for selling self-help books.

Here is what I think will work in the long run. And hopefully, I'll be able to report back about its success. Dieting to look better is fine but the best form of dieting is the one that builds character. So instead of focusing just on your body it is best to focus on building your character. Control your impulses, delay your reactions, slow down your actions, once you have built a character that is strong then the diet becomes a strength rather than a symptom of your character. Mind over body feels best. When did we stop teaching it? Surely, it doesn't sell many diet cokes but it does build character. The kind of character I'm going to need to be one of the five percent of obese people who lose and keep the weight off.