In this age of instant gratification and social media get-rich quick stories, it may be easy to forget that truly substantial changes rarely happen overnight and instead are the result of concerted efforts over time. An example is the groundbreaking Mexico one peso tax (roughly 8 cents in United States currency) on sugar-sweetened beverages (e.g., soda) that made international headlines when passed in October 2013. The tax, which went into effect at the beginning of 2014, was the first nation-wide tax aimed at changing a behavior believed to be contributing to the global obesity epidemic. The thought was that the additional cost of a tax would dissuade people, especially those who have limited money such as children and low income families, from purchasing and consuming sugar-sweetened beverages, which have been linked to obesity and diabetes. As the figure below shows, early returns suggest that the tax is indeed having an effect on behavior: 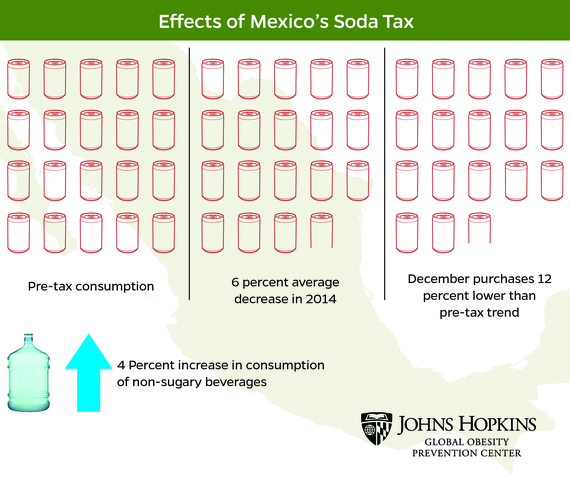 If the tax continues to have an effect, then other countries, states, and municipalities will likely consider following suit. But without seeing what transpired behind the scenes prior to the tax becoming a reality, the risk is that future attempts at such policy changes may fall short. A recent report, Advocating for Sugar-Sweetened Beverage Taxation: A Case Study in Mexico, compiled by the Johns Hopkins Institute for Global Tobacco Control (IGTC) at the Johns Hopkins Bloomberg School of Public Health, chronicles the tremendous amount of planning and effort involved in getting all the pieces together. In many ways this report can serve as a "playbook" to help bring to fruition any type of future policy changes aimed at altering potentially unhealthy consumption. Here are five general lessons from this playbook:

1. Exert patience and concerted effort.
Although many of us have heard the quote, "Rome wasn't built in a day," today's recurrent headlines of Internet and social media companies going from idea to initial public offering (IPO) within a year or two may make us forget. However, building substantial change is different from founding a company that sells yet another way for kids to tell each other that they are eating a cheeseburger. Remember longer-standing companies such as Google needed years of trial and error and lessons from other companies such as Yahoo, Infoseek, Excite, and Alta Vista.

As the report shows, the direct groundwork for the tax in Mexico began over five years prior to its enactment when an earlier iteration of the proposal stalled in the 2006-2009 Mexican legislature. However, one could argue that the groundwork began even earlier. For instance, earlier experience with tobacco taxes reducing smoking provided a scientific evidence base for using taxes to modify health-related behavior. Additionally, such an extended timeline means that when you advocate for change, the same decision makers that begin conversations may no longer be around in several years. So your strategy and whatever you propose need to have strong enough evidence and rationale to withstand differing key decision-makers, opinions and agendas over time.

2. Understand and engage everyone in the system.
The Internet and book stores are filled with lists on what successful people do...with the implication that if you do these things, you will be successful. (As a side note, if all successful people are morning people, then I am in trouble.) Some of these lists push the thought that you should spend your time and energy hanging out with successful people rather than wasting time with the childhood or school friend who hasn't hit it big or is struggling. The problem with this advice is that without deeper examination, you frequently do not realize who "matters" or will end up mattering in the future. People can help or hurt in many different and unexpected ways. If the person has not yet hurt you, why risk creating an enemy by ignoring him or her?

Analogously, a major part of the Mexico tax proponents' strategy was to first map all the people who may be directly or indirectly involved in the decision. Doing so helped proponents understand the system of people involved and how to best approach them. And proponents did not take for granted those who would already favor the tax. You undoubtedly have had the experience of someone making a decision that affects you without consulting you beforehand. Even if you agree with the decision such oversight leaves a bitter taste.

3. Communicate in many different ways across the system.
Recently, a friend exclaimed to another, "What? You still use [a certain method] to communicate? No one uses that anymore. Everyone uses [a social media platform]." Is there really only one or a few ways to communicate? In actuality, there is tremendous diversity in the manner and methods that people use to communicate. Even the in vogue modalities of social media seem to change every year. The wide variety of communication styles reflect the fact that people of all location, cultures, appearances, and sociodemographic groups are quite diverse. What resonates with one person may not resonate for another.

The report shows the many different ways both the tax proponents and opponents attempted to communicate their viewpoints. Newspaper advertisements, billboards, press conferences, scientific articles, radio and television segments, and online campaigns were just such some of the channels employed. And the messages came in different forms, ranging from the "12 spoonful's of sugar" campaign that emphasized the amount of sugar in soda to a YouTube video that asked, "What's more important: Public health or soda industry interest?" 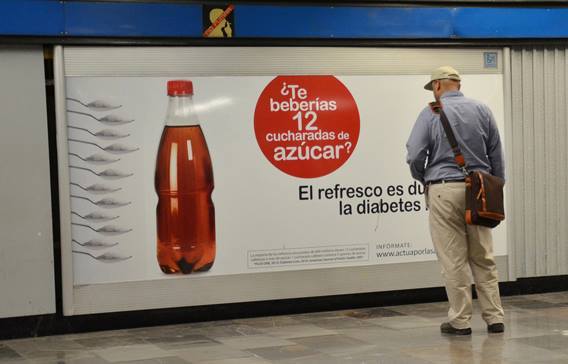 4. Utilize science.
These days, it may seem that science does not matter. After all, do you need science to star on a reality television show, sell things over the Internet, or post a YouTube video of you simultaneously singing, playing drums, juggling, cooking, and telling jokes? But people have been using science to make decisions for thousands and thousands of years. From Ancient Greek and Egyptian civilizations to the Chinese Dynasties to the European world explorers to the earliest leaders of the United States to emerging technology powers of Asia, science has played a major role in success and building sustainable systems. As the report shows, the Mexico experience was no exception. Scientists and scientific evidence and the manner in which advocates communicated the science, played a crucial role in designing, advocating, and implementing the tax.

5. Realize that things are more complex than they initially seem.
Finally, as the report shows, there is often a complex story behind major events that most do not readily see. The Mexico tax resulted from many dedicated, bright, and talented individuals and organizations working together across a wide variety of different efforts for a number of years. Of course, in the same lines, reversing the obesity epidemic is probably more complex than just reducing soda consumption. But reducing soda consumption could have many health benefits and lay the groundwork for a variety of future efforts.