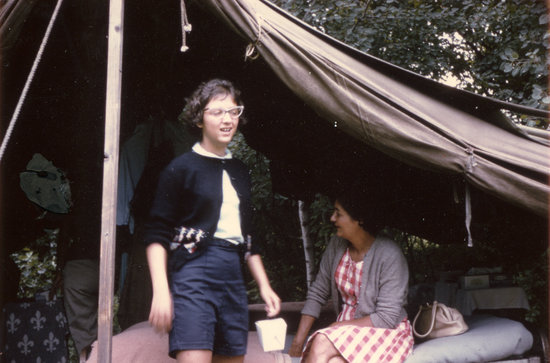 One summer in the early '60s at Camp Birch Ridge, when I was 12 or 13, I finally worked up the nerve to ask Paddles, my favorite counselor, the question that had been brewing in me: "How do lesbians have sex?"

Paddles, her camp nickname, was the boating and swimming instructor, as well as the head counselor for my unit, which, I swear, was actually called the Beavers. I had a mad crush on her, but of course I didn't think of it as that. She had a petite, muscular body, with the sculpted calves and rounded biceps of a swimmer. Paddles was pretty enough to enter county beauty pageants at summer's end. She needed to lose her bathing suit tan lines in order to parade in the strapless beauty pageant gowns, so during our after-lunch rest hour she would sunbathe topless, wearing only a bikini bottom. I would lie on my cot in the tent, writing letters home while sucking on a Sugar Daddy, and steal glances out the open flap over at Paddles lying in the grassy clearing, her body gleaming with baby oil. She had the most beautiful breasts. I memorized them, watching her breasts grow browner day by day while her blond hair bleached in the sun.

I don't know where I formulated my question, or how I even knew the word "lesbian." A topic so taboo was scary and intriguing, I suppose. I had no fear of self-incrimination, no worry that Paddles would think I was asking about myself, because it never occurred to me that I could be one of those perverted monsters -- that bulldagger image that I had somehow picked up underlying the culture's collective silence about lesbians. As far as I knew, it was just adolescent curiosity.

One day, the rest of my tent mates had taken off for our after-nap archery class, and Paddles and I were alone in the unit. Perhaps I lingered on purpose, poised to ask my question. She was safe to ask, because all her talk about her boyfriend meant that she was solidly heterosexual. She was no longer naked, having changed into shorts and a sleeveless cotton blouse, when I approached her counselors' tent. "Hi," I stammered. "I was wondering, uh, ummm, how do lesbians have sex?"

Paddles stared at me. Silence. She shrugged.

"You really want to know?" Paddles' mouth had turned down in a sour, disgusted expression.

"OK, I'll tell you." Paddles leaned her face closer. "With their knees," she said. Then she turned and walked away.

With their knees? I could not see how a knee could fit in a vagina. The only model I knew about for sex beyond kissing was intercourse. For years I imagined one woman hunched over another, no body contact being made, except for a knee lumpily pushing against the other's genitals, without much success of entry.

What is despised by a culture often remains in the dark like a tulip bulb over a long Dutch winter. My own sexual desire was buried deep throughout my childhood. Perhaps somewhere in my unconscious was lodged the terror that my mother's life embodied: Act on lesbian desire and you will suffer deeply -- you will become a suicidal and go to a mental hospital. When my eighth-grade girlfriends started flirtations with boys, I turned to ice cream, Vietnam peace marches and books. In high school, as I lost my childhood friends to their dates, I found myself playing Beethoven's "Moonlight Sonata" over and over again on the piano, filled with melancholy. My justification for my lack of interest in the boys of my small New Jersey town was that they were bumpkins and idiots. I believed that once I got to college I would meet some boys at my own intellectual level, and this meeting of the minds would initiate the explosion of my passion. As I had predicted, I did have boyfriends in college, but no passion exploded.

In adulthood I realized that the camp directors were a closeted lesbian couple, but in my camp years, no one -- neither parents nor counselors -- ever spoke of that. The directors had a friend, Miss Spencer, an adventurer who appeared at summer's end every year and presented a slideshow of that summer's journey. I remember her as a plain woman, a schoolteacher stout with middle age, always wearing sturdy, sensible shoes and a mildly stern expression. I'd bet she was a lesbian. In all her journeys, no traveling companion was ever mentioned. Whether she was a solitary woman or her lover was kept secret and carefully edited from the show, I'll never know. I remember one slide show in particular: her trip to Africa to climb Mount Kilimanjaro. She clicked through images of Serengeti wildlife: immense herds of gazelles, wildebeests and zebras, pictures of Masai women with their beautiful beaded neck and headpieces, while her narration lilted with names like "Tanzania," "Serengeti," "Kilimanjaro," evoking the wonder of exotic lands. And then there was a slide of Miss Spencer projected life-size on the screen, beaming into the camera, her walking stick raised triumphantly aloft from the summit of Mt. Kilimanjaro. That image lived in my adolescent bones, opening up what might be possible in the life of a common woman, how one could venture forth.

It would take the courage of feminist women and lesbian and gay pioneers -- those who initiated the women's and gay liberation movements, who broke cultural silence -- to allow me to find a voice and home for my passion. Then, in that welcome, I could venture forth myself into a life of activism and lesbian love.