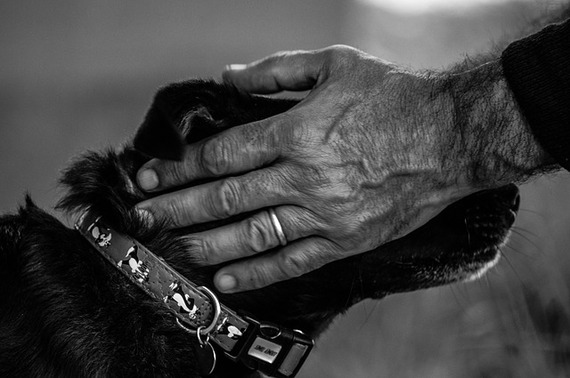 The dog was dead, and we were left to deal with the body. It wasn't even our dog, but our neighbors', a brindle-colored Plott hound named Dorsey who lived just a few houses down. This was in January 2007, and though I had just returned to college to finish my senior year, the distance did little to insulate me from the grief. I was 350 miles away but I wasn't always, and in fact, had spent quite a bit of time with Dorsey over holiday break due to my parents' dog-watching duties. Throughout Christmas and New Year's, I'd watched his body shrink and unravel, watched that dog become a shadow before my eyes. Some nights my parents, brother, and I took turns holding vigil, curling alongside Dorsey in our darkened living room, blanketed in the glow of Christmas lights.

Dorsey died just days after I returned to college. I received the phone call from my mother, who reported to me how Dorsey's humans had immediately returned home to retrieve their newly departed dog. They knew he'd been sick, just not how sick. Heartbroken, Dorsey's male human took to his shovel, busting through the frozen earth in an attempt to bury the body. He succeeded, mostly, but it wasn't until the following spring that a troupe of loyal neighbors and dogs -- myself included -- gathered in a shady corner of Dorsey's lawn to offer our true good-byes. Alongside Dorsey's previously dug grave we dug a second hole, into which we planted a fern.

Upon attending my first dog funeral ("memorial service," if we're getting technical) I surprised myself by finding the occasion far more sacred than profane. This was no goldfish's "burial-at-swirling-sea," but a carefully planned ceremony meant to ease our pain.

Though it didn't, at least not initially.

Sure, the hole in the ground was now filled, but not the hole in our hearts. My own grief felt unexpected, unfounded even, particularly because Dorsey wasn't even my dog.

He has his own loving family to grieve for him, I reminded myself as I peered down at his fern, so why do you feel this way?

Perhaps because Dorsey had shared something quite intimate with me in his final days, as had my parents, whom I'd watched hand-feed him hot dogs atop my old sleeping bag before carrying him to the bathroom in the backyard snow. Throughout our dog-sitting duties, my family had watched Dorsey grow weak and incontinent and, as the days passed, become more of a shell of a dog than a dog. Thus, I reasoned that the grief I felt for him was the result of what he'd given me: a front-row seat to a show I wasn't certain I wanted to see.

*
These days my dog-related duties are fully centered on Cici, my brazenly disobedient thirteen-pound mixed breed whose howls can be heard round the block. Undoubtedly she's taught me various lessons throughout her life, including the Zen-like qualities of chasing squirrels, chasing cars, and barking at whichever of the two first crosses her field of vision. Though I admit that on occasion I've treaded into the unthinkable realm of wondering what more serious lessons she -- much like Dorsey -- might teach me in her final days. Including the hardest lesson of all: whether my love for her will one day demand I place her aching body in the passenger seat as we take our final, fated drive to the vet.

I'll admit that my interest in pets, and specifically, what their abbreviated lives might teach us, is directly linked to my own current existential crisis. As I enter my thirties, I've at last reached the point in my life where the luster of youth's immortality has been swiftly replaced by the less-popular mortality. Today I am the proud-ish owner of a minivan and a mortgage, which is to say: today I feel like my dad.

Yet of far greater concern than my own future farewell is the fear of saying farewell to my loved ones. As a new father, I now think of death differently -- no longer an "if" but a "when." My son had hardly left the delivery room before Death transformed from a scythe-wielding cloak to a clock, one whose every tick reminded me that none of us are getting out of here alive. Now every scraped and skinned knee my son acquires serves as further confirmation that we cannot protect even the people we love the most. Worst still is the notion that when it comes to our pets, not only are we incapable of preventing this pain, but on occasion, we may be the cause of it. And one day, after sharing a life together for so many years, we may be forced to don the cloak and wield the scythe ourselves.

Come on, old girl, get in the car, we'll say. And tragically, that old girl will obey.

It's a pain most can't fathom, but what choice do we have? A life with no pets at all? If pets have taught me anything, it's that we should never shy away from joy for fear of losing that joy.

A few months back, this lesson hit close to home. My son and I were at the vet awaiting Cici's yearly checkup when I glanced up from the rainbowed rows of dog food to spot a man leaving an exam room unaccompanied by his pet.

My stomach dropped. And it dropped further once I realized that the man was a friend of mine, and that I'd inadvertently intruded on his moment of crisis. For weeks, he and I had chatted casually about our shared love for our dogs and our fear of letting go. And suddenly there I was witnessing his supremely personal moment, the interloper to his grief.

Upon seeing me he offered a halfhearted smile, then gave Cici a scratch behind the ears.

I bumbled through my long-winded condolences, trying hard to find a string of words that didn't feel canned, words that might offer true comfort. I wanted to tell him about Dorsey, about our unconventional goodbye, and about what that dog had taught me simply by slipping away.

After my bumbling subsided, my friend opened his mouth to speak.

"You know," he said, his voice wavering, "life might be easier without a dog, but it definitely wouldn't be better."

Fifteen minutes later my son and I left the vet with our dog in tow.

And life, for us, was better.

GPS For The SoulPetsgriefAnimalsLife Lessons
Go To Homepage

B.J. Hollars is a writer and professor at the University of Wisconsin-Eau Claire.