Millions of Americans miss out on critical hours of shuteye every day, and this epidemic of insufficient sleep holds critical implications for all of us.

How well did you sleep in the past week? If you're like many Americans, busy schedules, sleep troubles, families, stress and other things may have kept you from getting enough rest at least one or two days, possibly even more.

While awareness of healthier sleep habits and the benefits of rest has been growing due to increased research and public health campaigns, trends still show many people of all ages simply aren't sleeping enough.

At first thought, sleepy people may not seem like such a big deal, but the reality is a sleep-deprived society is less healthy and more dangerous. Read on to learn about the implications of America's lack of sleep, who is most affected, and how to get better rest.

It's estimated that between 30 percent and 40 percent of Americans regularly miss out on adequate rest, described as at least seven hours each night. While certain groups are more likely to be sleep deprived, it's something that can affect anyone.

Even if you sleep well most of the time, when family members, coworkers and fellow drivers are sleep deprived, insufficient rest can even have indirect effects. Let's take a look at what it means when people aren't getting enough rest:

The Face of Sleep Deprivation in the U.S.

The consequences of sleep deprivation are serious issues from a public health and safety standpoint, and studying these trends in different communities can shed insight into who isn't getting enough sleep, why, and how to improve. Here's a look at the current research on sleep trends and what they might mean for you.

Differences by State and Region 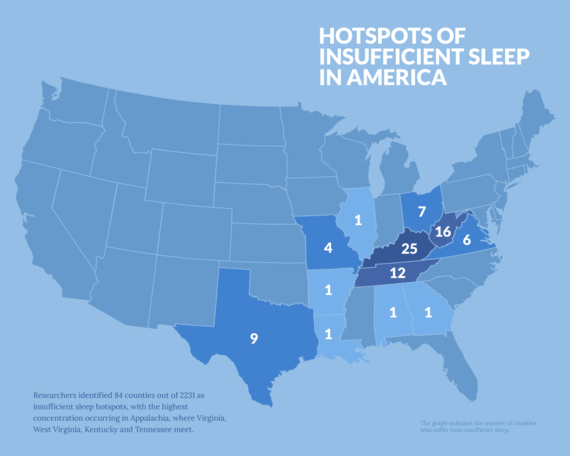 A recently published study in the Sleep Health journal looked at county-level trends to identify "hotspots" of insufficient sleep in America. Researchers identified 84 counties out of 2231 as insufficient sleep hotspots, with the highest concentration occurring in Appalachia, where Virginia, West Virginia, Kentucky and Tennessee meet. Overall, hotspots were found in:

On the other hand, "coldspots", where people had very low levels of insufficient sleep included 12 counties in Virginia; 7 in Texas; 6 in Wisconsin, Illinois and Iowa; 2 in Georgia and Michigan, and 1 in Alabama, Minnesota and North Carolina.

No clear demographic pattern was identified for coldspot counties, but in the hotspots, people were more likely to be white, younger, of low socioeconomic status, and in poorer health.

In the high-concentration Appalachia area, study authors report that populations are at also at higher risk for obesity, heart disease, diabetes and other illnesses than elsewhere in the nation, also commonly identified as risk factors for poor sleep and effects of insufficient sleep.

All three of the studies mentioned here show the more sleep deprivation in the Appalachian and Southeast regions of the U.S., which researchers speculate may be influenced by a general lack of education, employment, lack of access to care and infrastructure.

Effects of Age and Lifespan Trends

The 2008 CDC report identified that people under age 45, particularly in the 25 to 34 age group, were more likely to report sleep deprivation, while people over 45 were most likely to report no days of insufficient sleep in the month prior to the study. 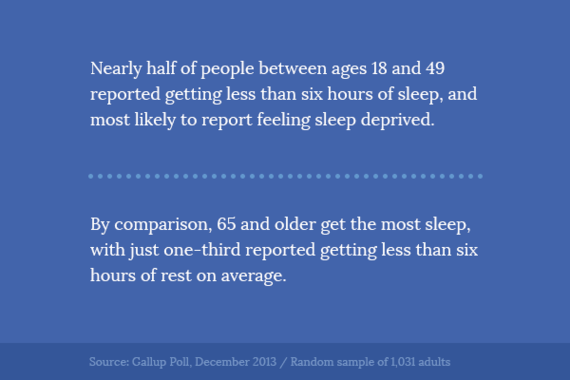 Younger people tend to lose sleep due to lifestyle and social factors, with having young children being cited by Gallup as a key issue. Other factors that may play a role are a shift towards eveningness in adolescence, higher prevalence of electronics use before bed, schedules, caffeine consumption, and poor sleep hygiene.

Other research also suggests that how well people sleep between 30 and 60, predicts mental functioning decades later as they age. Rather than viewing it as time wasted, researchers say younger people might consider healthy sleep as an investment in their later mental and physical health.

The Impact of Gender on Sleep

Although sleep is a universal function, it appears that men and women also tend to differ on amounts of sleep and on the impact of insufficient sleep.

In the U.S., women are more likely to report insufficient sleep in the past month compared to men, based on the 2008 CDC report. Polls from the National Sleep Foundation show women report more sleep difficulties than men, with higher rates of insomnia, restless leg syndrome and other disorders. Researchers suggest differences in sleep may relate to factors unique to women, including pregnancy, menopause, and changes to hormones over their lifespan.

This sleep gap may be pretty significant, too, according to a study from Duke University. Their research suggests that women actually need more sleep than men, and that women are more susceptible to the side effects of insufficient rest. Sleep-deprived women have higher risks of heart disease, depression, stroke risk factors, more hostile and angry feelings, and increased inflammation markers, which can worsen pain.

Men aren't in the clear though. One study found that under sleep deprivation, men tend to make riskier decisions while women tend to become more risk-averse. As an example, according to an American Automobile Association report, men are more likely to drive drowsy, to fall asleep while driving, and to be drowsy when involved in a crash. In particular, male drivers under age 25 exhibited the highest risk of drowsy driving crashes. 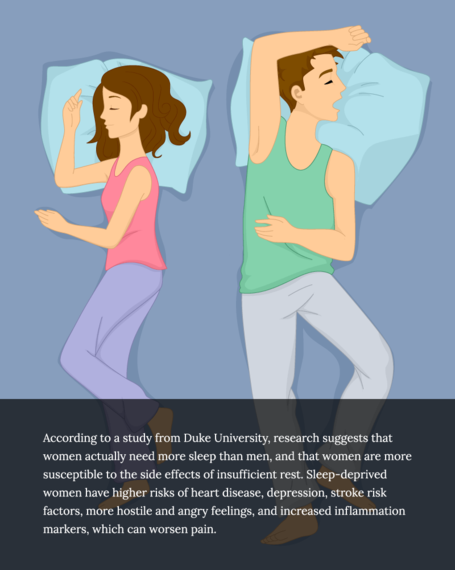 In the 2008 CDC study, people with a college degree or some college were less likely to report insufficient sleep compared to people with high school diploma or GED or less than high school education.

People that were unemployed or couldn't work were significantly more likely to report 30 days of insufficient sleep compared to employed or retired persons, students and homemakers, which researchers suggest may be due to higher stress, medical issues and other conditions.

The type of jobs people have can also play a role in their overall sleep quality. Shift workers in particular remain a key area of focus for sleep researchers, as they are at higher risk for chronic sleep deprivation, insomnia, and sleep-related health problems. Other research from the American Automobile Association shows that night shift workers are also six times more likely to be in a sleep-related car crash.

Improving sleep at the personal level depends largely on education and attitude. Organizations like the CDC and National Sleep Foundation produce regular public awareness campaigns that aim to explain the benefits of getting healthy rest and discuss good "sleep hygiene" tips people can use in their daily lives. The key tenets of good sleep hygiene include:

Workplaces can also have a role in improving people's sleep, by supporting healthy corporate cultures. Offices where a healthy work-life balance is respected, where napping isn't frowned upon (during appropriate times and places of course), and with some flexibility in hours tend to have happier and healthier employees over time. And, well-rested employees perform better on the job and are more satisfied with their jobs, too.

Ultimately, we each hold responsibility for our own health, and the more you know about what constitutes good sleep habits, the better equipped you are to get good rest and identify potential problems early on.

Do you regularly get at least seven hours of sleep? What do you do, or what can you do to improve your family's sleep habits?

This article originally appeared on the Amerisleep blog.