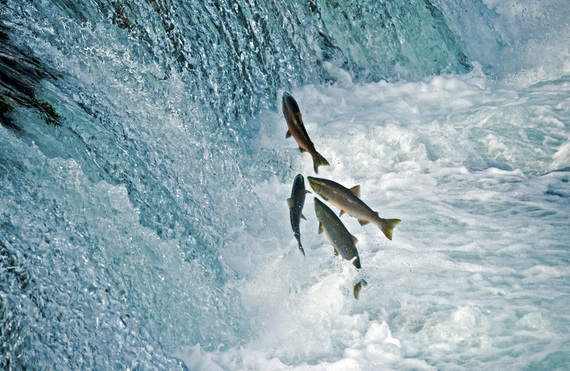 Each year, countless salmon must jump Books Falls in Alaska as they make the journey back to their place of birth to spawn a new generation. Photo © Ami Vitale

One day in 2014 a female eel set off from Nova Scotia on a long and hazardous journey to her spawning grounds. This was no ordinary eel. Scientists had released her with a tracker to learn more about her migration. After 45 days, the eel had travelled no less than 2,400 kilometers (1,500 miles) and reached the northern edge of the Sargasso Sea. There contact was lost, but it is assumed she spawned and released thousands of eggs.

It was the first time such a migration had been tracked in detail. The experiment, conducted by the Ocean Tracking Network at Dalhousie University, Nova Scotia, showed that migrating fish like eels have complex lives, combining journeys through rivers, down coasts and across open seas. For the eel, the unity and integrity of these ecosystems is a matter of life and death, as it is for other migratory fish--from New England river herring and California steelhead to the Mekong catfish, salmon species in many parts of the world, and even tuna, which take long migratory routes across the world's oceans. All depend on regular migration and in turn, millions of people around the world rely on them as both a food source and income. In the Mekong River basin alone, migratory fish are an important source of food and income for tens of millions of people.

Yet populations of these and other migratory fish, especially those that migrate between river and ocean, have collapsed over the last century or are collapsing. Europe's population of eels has tumbled to just 1% of the numbers of a few decades ago. Some fish are on the Red List of threatened species. What has caused this precipitous decline in once abundant stocks of migratory fish? What can be done about it?

The critical state of many fish migrations between rivers and oceans has a host of causes, mostly the unintended consequences of human activity. Unregulated fishing and destructive fishing practices, bycatch at sea which scoops up unwanted fish in the search for more profitable or targeted species, and the construction of dams and levees which cut rivers off from their natural floodplains, all harm the ecosystems essential to fish migration.

Dams in particular often block migratory fish from the stretches of rivers they need to thrive and reproduce. The proliferation of dams on the Amazon, Irrawaddy and Mekong, for example, threatens the remaining fish migrations on those rivers. Remedial measures such as fish bypasses and ladders can only partly compensate for the massive obstacle to swimming fish. Eels cannot negotiate fish ladders at all, although there are other types of fish passages they can use.

The migratory cycle is the rhythm of nature. It is intricate and sensitive, vulnerable to shocks from outside. If it is disrupted, fish stocks fall fast. The economic consequences can be serious, and poor people are often the hardest hit. The decline in fish stocks in the Mekong, one of the world's richest river fisheries, is threatening supplies of animal protein for millions who rely on it. Fisheries directly employ over 58 million people worldwide and are valuable for sport and recreation. Fishing is the most popular sport in most developed countries, with about 50 million participants in the United States alone. 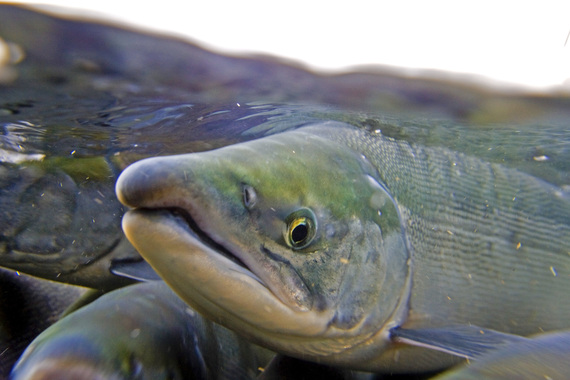 The still-grey sockeye salmon (Oncorhynchus nerka) wait to pass through a fish-counting gate at the Pacific Research Institute of Fisheries and Oceanography. Photo © Ami Vitale

Disrupting fish migrations can have serious consequences for nature as well, destabilizing entire ecosystems. If stocks of fish decline, the amount of food available to other species can fall. Overfishing of menhaden, a non-migratory fish on the east coast of North America, leaves less food for striped bass, an emblematic and important migratory fish prized by sport fishers. Fish such as salmon are a significant source of nitrogen in rivers, where after spawning at the end of their life cycle, their decaying carcasses fertilize river banks and forests.

If we care about migratory fish, then we can easily plot a better course, and in some parts of the world, we already are. In the United States, for example, there is an expanding program of dam removal. Dismantling old and unneeded dams on the Taunton River in Massachusetts is allowing river herring to return in greater numbers to their ancient breeding grounds. These interventions are useful, but their impact is limited without addressing other disruptions as well across the migratory system - river, coast and ocean - as it affects a given fish species.

We must also improve our knowledge of fish stocks, which remains poor. Of more than 10,000 fisheries, fewer than 440 are regularly and robustly measured. Without a sound understanding of the condition of fish stocks it is hard to put management rules in place.

Ecosystem restoration and protection are also key. Managing the ecosystem requires collaboration and agreement amongst many stakeholders. On the Penobscot River in Maine a group of state and federal agencies, conservation organizations, the hydroelectric company and the Penobscot Indian Nation put together a plan to remove hydroelectric dams and restore the river without reducing the amount of electricity generated. New technology can play its part. An app called eCatch reduces the bycatch of vulnerable species while allowing fishing operations to continue providing livelihoods to fishers.

Financial innovation can support better protection as well. There is scope for green investment to fund schemes to protect ecosystems for migratory fish. Where income can be earned, for example though restoring and managing fisheries that are part of a migratory system, green investment in the form of green bonds, debt swaps and impact investment could be mobilized, perhaps alongside conventional finance.

We have known for years that fish stocks are declining. Overfishing was one part of the problem, but not the only part. As we learn more about fish migrations, we begin to see the complexity of the underlying ecosystem. Conserving migratory fish and their ecosystems is a major challenge. But we have the tools to reverse the crisis engulfing many fish species, and benefit nature and people simultaneously. The eel might never give up all her secrets but she can still thrive.