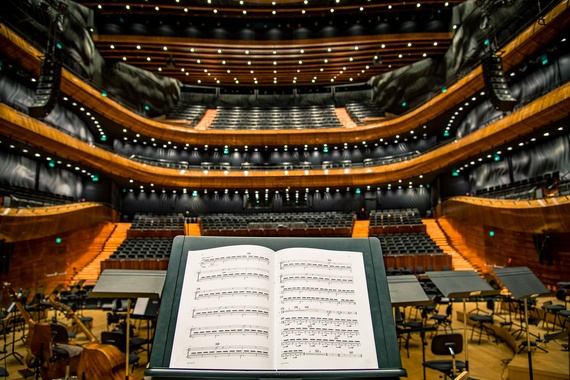 Winning my first violin job at the London Symphony Orchestra at the very 'green' age of 24, I arrogantly presumed that I had now learnt all there was to learn about the violin. I had been learning since I was 6 years old, had attended Chetham's specialist music school, then the prestigious Royal Academy of Music where after 5 years of intensive study under incredible musicians, I was let loose to make my own way in the world. As I put on my highest pair of heels and strode into my first rehearsal with the London Symphony, I was excited to bursting and keen as mustard. It was a good job I was, as the next 3 years would prove to be the most overwhelming and challenging of my life.

Every night after a day of rehearsing, recording or playing concerts, I would take the music home to learn for the next day. Staggering home at 11pm each night, I would put on a practice mute (so as not to receive an antisocial behaviour order from the neighbours...) and try and decipher the next day's programme. I would be up until the early hours every morning making sure I could get through the next day's pieces without coming crashing in on my own in the wrong place.

[Read More: Why Learning to Fail is an Important Step in Succeeding]

The most terrifying and thrilling moments I ever had with the LSO were recording Star Wars. We weren't able to see the music until we turned up on the day for the sessions at Abbey Road studios so everyone was in there early checking out what monstrously difficult and yet superlative orchestral parts the composer John Williams had put in front of us that day. We had two goes at each take - that was all. Come in wrong and you'd ruined the take for the entire orchestra and let down the greatest film composer of all time... My heart was in my mouth. And yet to sit there with the trumpets heralding the opening of one of the greatest films ever made and knowing that I was about to be allowed to play Princess Leia's theme with one of the best orchestras in the world was the most dizzying and thrilling moment I'd ever experienced.

Looking around the LSO I truly understood what an art form orchestral playing is. It's not just the decades of learning the intricate skill and precision of being able to play to that standard, it's also understanding that no man (or woman!) is an island. The sum is most definitely greater than the parts when you can work together with people who inspire you, challenge you and sometimes annoy you, but cause you to think and improve and never say 'that'll do.'

Twenty years on I am still thrilled by what so many of my friends and colleagues achieve; music which I could never imagine seems to pour out of them. We create music together which still now can make me weep, laugh and feel a million dollars.

Learning should never be something which is 'done.' We should all be looking out for new people to learn from, to inspire us and to make the world altogether a more fascinating place.

Nicole Wilson is the founder of Musical Orbit, a platform for online and on location lessons with the world's greatest professional musicians.