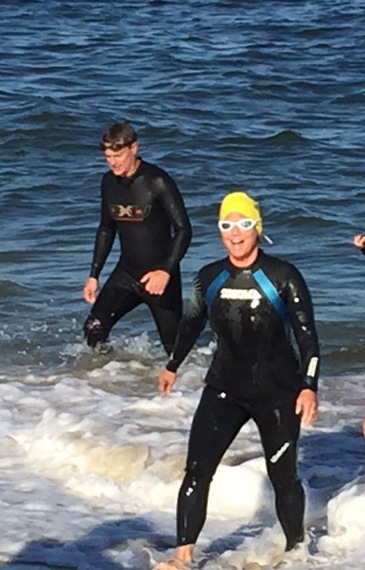 I registered for the Bethany Beach Triathlon to build endurance as part of my marathon training. And I wanted to practice approaching and overcoming fear. Drowning in the ocean? How about nightmarish images of my skeleton crumbling to the ground as I attempt to run 26 miles?

It was at the beach and sounded like fun.

My only goal was to finish.

I struggled to find my breath within moments of entering the ocean. I was too afraid to put my head underwater because I was sure I would drown.

No amount of training in the pool prepared me for the force of the waves and the effort it took to fill my lungs with air. A lifeguard in a kayak let me rest.

"You've got a great stroke, and you're a strong swimmer," he said. "You can do this."

"Then why am I struggling to breathe?" I asked.

"You're putting too much effort into your stroke."

I wasn't offended when he said my body's got enough surface mass to carry me to the next buoy. Pretend your arms are feathers, he said. He coached me to swim in a relaxed, almost delicate, way, taking breaths, using my diaphragm to take in air instead of my chest.

It took me until I reached the third buoy to get into a rhythm, and I finished the 1,100-yard swim.

I should have died. My mind was all over the place. My first thought was all I was ever trying to do was lose weight. Why couldn't I just stop eating?

In the car on the way to the beach I listened to The 50th Law by 50 Cent. I had been saving the rapper's memoir for the drive because I knew it was about becoming fearless. I was determined to make "go shawty" my mantra.

A school of dolphins swam nearby and apparently a whale, which I did not see and only learned about when I was safely on the shore.

I was unsteady on the beach and as I made my way to the transition area. I settled onto my bike and pedaled hard after the halfway mark to get ready for the run.

"We're sorry, there's not enough time for you to do the run," a man in a suit said to me as I was dismounting and preparing to grab my race belt.

"That's the catch-22 of being a first timer," he said. "You're the last wave but you still have to finish by the race cutoff." The roads needed to reopen and the transition area needed to be dismantled.

"Okay," I said. I was deflated but full of endorphins. I wanted to be a good sport.

I cleared out my gear in a daze yet I was aware of how primed my body felt to run. Now that I started this I needed to be a triathlon finisher -- a triathlete -- so I would have to do that swim again, which seemed horribly impossible to contemplate.

My conversations with my children made me come to terms with the fact that they had become adults along the way. Gone was any trace of adolescence. My daughter, who helped me select my tri outfit the night before the race as we FaceTimed, wanted so badly to make it right.

They were heartbreakingly empathetic.

I wondered why I thought I could have finished the tri by the cutoff and why I didn't know about the cutoff before I registered for the event. A few days before the race I noticed in the rules that the cutoff was 10:30 a.m. In truth, I did some quick mental math and even asked about the cutoff at the Q and A.

The event coach made some comments about logistics and accommodating the town's requirement to open roads but suggested I concentrate on running my race. So that was it. I didn't think about it again.

Later when I was speaking with my son, he suggested I use the experience to my advantage.

"How often do you get the chance to fail forward?"

He didn't say it but in some ways I am in a better position to evaluate my training because I didn't finish. Because I should have finished.

What did I do well?

What can I learn from the swim about sharpening my focus to carry into my marathon training?

And while I had been training for the swim, the bike, and the run, I did not train for the event, the triathlon. The race.

I thought about the swim as the swim, the bike as the bike, the run as the run.

Technically I only trained for the swim and the run. During my brick workouts, I was thinking about running after biking but never about what I would need to do on the bike during the race. I never spent two seconds thinking about the transitions. I heard about athletes who set their shoes into their pedals and bike and run without socks but I didn't think any of that applied to me because my goal was to finish.

I was not in a hurry.

Instead I used the bike to recover from the swim and to prepare for the run. I ate a peanut butter and jelly sandwich on the bike and stopped to open my water bottle at the halfway mark. If you were watching me, would you think I was racing?

On the phone I told my running coach I took more than nine minutes to transition from the swim to the bike. I could hear her suppress a giggle. I used a towel and baby powder to brush the sand off my feet before putting on my socks and shoes. I used the porta potty.

I can do this.

As I fail forward, I'm shifting gears. Next time my plan is to train to run my race. And, oh yeah, finish.

More:
healthy livingtriathlonFitness and Exercise
Newsletter Sign Up
The essential guide to taking care of your mind and body
Subscribe to HuffPost’s wellness email
Successfully Subscribed!
Wellness delivered to your inbox