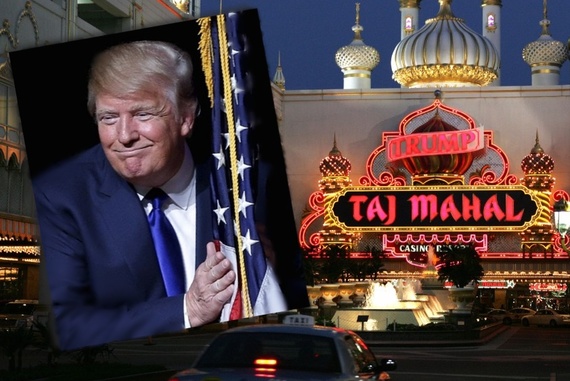 When former communications director for Trump's "Make America Great Again" super PAC, Stephanie Cegielski, wrote her open letter denouncing Trump as a protest candidate who never expected the presidency who's "ego has now taken over the driver's seat," she finally hit on the heart of the matter when it comes to both politics and all things Trump.

The ego is the persona--the person we think we are and would like to be. It is our inner image of ourselves: a mental concoction based in our life experiences and social programming. The image is not who we actually are. And we see this truth everyday.

Ever known someone who loudly professes their integrity and honesty while lying and backstabbing others? Ever heard someone publicly profess their sexual morality? And next thing you know they're caught with male prostitutes? Ever then wonder, "How the hell can these people say such things when they're obviously not that person at all?"

This is why. The ego is a mental program. It does not depend on truth to exist. Which is the whole problem with Trump: he's invested in winning, not because he's truly qualified to be president, but because his ego demands it. So let's take a look at life à la The Donald and see why.

Born into a well-to-do family, Trump's father was a builder and real estate developer. Having been raised in a well-to-do real estate family myself, I realize this is not necessarily an advantage--if you're the sensitive type.

I remember asking my first live-in lover after six months why all his friends were no longer coming over. "You want the truth?" he asked.

"They all think you're a stuck-up asshole."

I was beyond shocked. And because I wondered what they were seeing I actually began to observe how I acted around people. And I found myself doing lots of innocent things like saying, "Gee, isn't Paris beautiful in the springtime?" and "Don't you just love this flatware design?"

Which is fine if you're at a dinner party in the Hamptons. But saying that to your blue-collar boyfriend's blue-collar friends sitting at the dining table playing poker, drinking beer?

Right then and there I decided to change and learn about how life is for the vast majority so I could become more human ... and humane. That was also the pivotal moment when I switched from the Republican to the Democratic Party.

Donald, however, is not the sensitive type.

After he went to military school he joined Elizabeth Trump & Son and set about trumping his father's record, taking over the company at age 25. Since then (amongst other things) he built Trump Tower on Fifth Avenue. Then he got into the casino gambling business--as we know, an incredibly moral high-ground kind of endeavor--opening Trump Plaza Hotel and Casino in Atlantic City, then expanding his gambling kingdom with the $320 million Trump's Castle. Then he bought the Taj Mahal--the largest hotel-casino complex in the world--and stamped his name on it.

According to various biographies, along the way he married fashion model Ivana Winklmayr and had three kids, had an affair and a child with actress Marla Maples (wife number two), then divorced and married a third model, Melania Knauss.

Now let's assess the ego-input for Donald Trump so far: born and raised rich, military education, finance major in college, heir-apparent, 25-year old CEO, skyscrapers and Castles, Towers, high-roller gambling and high-fashion models. And we haven't even gotten to the part about spending 11 years at NBC as the main star and producer of the "reality" show The Apprentice.

And we're surprised when whistleblower Cegielski writes, "If you are one of the disaffected voters -- one of the silent majority like me -- who wanted a candidate who could be your voice, I want to speak directly to you as one of his biggest advocates and supporters.

Which is what the ego always does best.