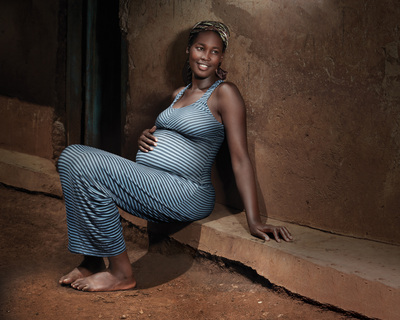 For twenty-six year old Eunice from Migori County,Kenya, celebrating her daughter Sherry's fifth birthday is a milestone that few of her friends have enjoyed. As with many areas of Africa, a child born in Migori is seven times more likely to die before the age of five, compared to a child in Europe.

Despite recent gains in improving maternal and child survival rates in Africa, the continent still rates the lowest in the world. In Kenya, child mortality stands at 52 per 1000 live births and more than 6000 mothers die every year giving birth

For many mothers like Eunice, the survival of a baby is often a hit or miss , four in ten newborn babies die within the first 28 days of life. These first days are when newborns are highly susceptible to infections such as pneumonia, diarrhoea and septicaemia, which require hospital treatment or intensive care in severe cases.

With almost one third of women in Kenya giving birth away from health facilities, it is easy to see how the odds of survival are poor. Due to different factors such as infrastructure and culture, many mothers opt to deliver their babies in less than hygienic conditions.

The same factors that drive child deaths around the country are similarly keeping maternal mortality rates high in counties like Migori. A recent survey by The United Nations Population Fund (UNFPA) and partners showed that Migori is one of only six counties responsible for about half of Kenya's maternal mortality burden.

A remarkably sad fact is that many of these deaths could be prevented by the simple intervention of providing proper hygiene facilities. According to statistics, nearly 1,000 children die each day due to preventable water and sanitation-related diarrhoeal diseases.

Just getting a child to reach five years has been associated with overall improved child survival rates, and this is why brands like Lifebuoy have moved to inspire the simple life-saving habit of handwashing with soap.

Lifebuoy has released their latest Help a Child Reach 5 film which will be broadcast in Migori as part of the campaign to raise awareness on the importance of handwashing with soap, a habit that experts have called 'the world's best vaccine'.

The data on this highly affordable habit cannot be more astounding. According to the 2014 Kenya Demographic and Health Survey (KDHS), only three in ten households in the country have a place for hand washing. In western Kenya where Migori County is located, this figure is even lower.

Combining this practice with low cost interventions such as immunisation, family planning, delivery under skilled care, early initiation of and exclusive breastfeeding and umbilical cord care are promising solutions that can reduce up to 70 percent of newborn deaths. A report by several partners including the World Health Organisation, UNICEF and UNFPA recently called for better coordination between those promoting water, sanitation and hygiene (WASH) programmes and the maternal health sector. It is a message that must continue to be advocated not only to mothers, but also to those in health care who handle mothers and infants.

More than 150 years ago, a Swiss doctor Ignasz Semmelweiss found that poor hand hygiene of healthcare providers correlated with an increase in postpartum infections among mothers. Studies that are more recent have shown that simply handwashing with soap during critical occasions in new born care can reduce new born deaths by up to 44 percent.

Handwashing with soap offers protection against pandemic flu, SARS, trachoma and parasitic worm infections. It keeps children in school and reduces infections that mothers and babies may contract during delivery and postnatal care.

Access to good hygiene, including handwashing with soap, is an important indicator in the United Nation's Sustainable Development Goals (SDGs). The fact is that there is a lot of ground to be covered, not only in households but also in our health facilities. A WHO report last year for instance found that 38% of healthcare facilities in 54 low-income countries are without a decent water source.

It is time to begin seeing the provision of clean water and sanitation not only as delivery of hygiene infrastructure, but also as an essential part of infection prevention and therefore a simple way to improve quality of care for mothers and newborns.

The First Lady of Kenya, Her Excellency Margaret Kenyatta, launched the 'Beyond Zero Campaign' to improve health outcomes for mothers and babies in Kenya. UNFPA Kenya called on government officials, donors and civil society partners to commit resources towards improving maternal and newborn care in the country. However, the challenge remains: how do counties in Kenya implement measures on a large scale?

There are numerous collateral gains from improved maternal and child survival rates, not least being the confidence for parents that pregnancy and childbirth is not a gamble with the life of the mother or baby. It will mean that girls like Sherry can be joined by many of their peers in celebrating their fifth birthdays, looking forward to joining school, to making many friends, and to growing up healthy and happy.

After all, this is what all parents would wish for their children.

Dr Myriam Sidibe is the Social Mission Director for Africa at Unilever. Siddharth Chatterjee is the UNFPA Representative to Kenya and the UN Resident Coordinator a.i.