Have you noticed that almost no actors who play Othello blacken their faces anymore? Of course not, blackface is considered distasteful at best and racist at worst. Nowadays Othello is routinely played by an actor of color or the color issue might be highlighted in a different way, as in a recent production directed by Peter Sellars, in which Othello and Desdemona were played by white actors while all the other cast members were of color.

We get it with race in the context of theater this way, but not with disability. Whenever a protagonist is disabled, it is more likely than not that a non-disabled actor will play the part. Recently there was uproar in the Deaf community over a New York adaptation of Carson McCuller's "The Heart is a Lonely Hunter" in which the central character Singer who is deaf and mute is played by a hearing actor. And disabled actors protested the use of sighted Abigail Breslin in a production of the life of Helen Keller when a blind actress might have done the job as well if not better. The television program "Glee" is receiving critiques because, although it includes a singing and dancing wheelchair user, the actor who plays the part isn't disabled. And Larry David has come under fire for his use of not one but two actresses who can walk playing wheelchair users in a single episode of "Curb Your Enthusiasm." 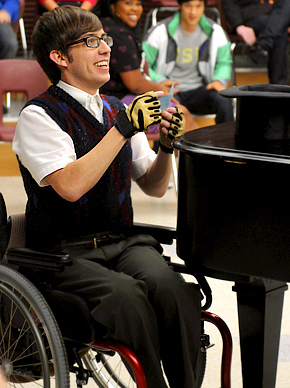 The issue isn't purely ideological. There are an increasing number of actors with disabilities who have trouble getting parts and for whom these major roles would be a great opportunity. According to a recent article in The Hollywood Reporter, out of a total of 600 characters on television shows in a given season, only 12 will have a disability. And of those, most will be played by non-disabled actors. A third of disabled actors have faced active discrimination by being denied auditions or not being cast in a role because of their disability.

Yet every actor knows that there is Academy Award material in playing a disabled part. Think of Dustin Hoffman in Rainman, Tom Cruise in Born on the Fourth of July Jon Voigt in Coming Home, Sean Penn in I Am Sam or Daniel Day Lewis in My Left Foot. There is a very high frequency of Oscar winning films that depict disability, but very few of those clutching the golden statues are people with disabilities.

There is a standard response on the part of Hollywood and Broadway when this issue is raised. The producers will say that they "tried" (if they tried at all) to use disabled performers but that they couldn't find anyone good enough to play the part. Aside from being a poor excuse, this response should lead us to see a vicious circle. If young people don't see role models in performers with disabilities, they might internalize the obvious message--"Don't go into show business if you have a disability. You'll never get a job!"

The reality is that the pool of excellent actors with disabilities is out there, but that producers don't know how to tap into it. The situation is very similar to the one put forth 30 years ago about why there were lots of good sprinters of color but very few long distance runners of color. People argued that blacks were just not suited to long distance running (and racist explanations went further into character type). But now a person of color will routinely win marathons. The reality is that 30 years ago the pool of runners of color was too shallow to produce many winners. Now no one ever claims that blacks can't be distance runners.

There are legitimate arguments about why would want to avoid limiting acting roles to certain groups. You don't want to deny a good actor the chance at playing a disabled character simply because of their ability status. Just as women play male roles and we try to mix up racial stereotypes, we should, so the argument goes, not limit actors on their ability to play any role whatsoever. That appeal to freedom of choice is a good one, but it crashes up against the fact that there is active discrimination against people with disabilities. And where there isn't active discrimination, there is subtle bias.

Most people defend the right of actors to play whatever parts they want, and I would agree. But the current reality is that non-disabled actors get to play whatever roles they want whereas disabled actors don't. So there is not a level playing field. One group has all the advantages while the other is discriminated against. The three major entertainment unions agree. It's now been a year since they launched a campaign to create equal employment opportunities for people with disabilities.

Why should we care? Disability isn't a minor issue. People with disabilities are amongst the largest minority groups any country, amounting to about a fifth or sixth of the population. And disability isn't a "them:" its an "us." There is a pretty good chance that people reading this article will become disabled in some way as they move through their lives. The media helps to shape and define how society at large thinks about disability. The more that television, films, theater, and other forms of performance reflect a world filled with diverse peoples and bodies live, the more egalitarian and fair our society will be.

The one way to achieve this goal is have not just characters with disabilities appear regularly in the media but to know that people with disabilities play them. One day we might see an Oscar winner ramp onto the stage in a wheel chair, or see not Daniel Day Lewis striding upright to the podium to collect his trophy for portraying the bent and twisted writer Christy Brown who has cerebral palsy, but an actual actor with cerebral palsy amble haltingly up to the stage to accept the award in a slurring but proud voice. At that moment, we all might share that pride that one more category of discrimination had been added to the list of abominations we no longer tolerate.